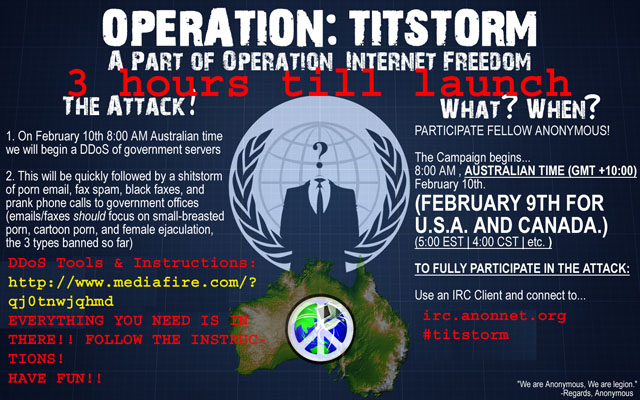 The loose-knit confederation of internet activists who organise under the banner “Anonymous” appears to have again targeted Federal Government websites and other communications systems in protest against the internet filtering initiative.

The Attorney-General’s office said this afternoon that the group had knocked the website of the Australian Parliament House offline this morning for approximately 50 minutes due to a distributed denial of service attack by the group. However, at the time of writing the site was still unavailable.

A spokesperson for the department confirmed that Communications Minister Stephen Conroy’s Department of Broadband, Communications and the Digital Economy had also been suffering a “degraded service” on its website.

“Australian Government agencies identified as potential targets by ‘Anonymous’ were briefed in advance and were provided with suggested mitigation strategies,” said the spokesperson for Attorney-General Robert McLelland. “The Department of Defence Cyber Security Operations Centre continues to monitor the situation.”

In a statement issued by Anonymous, the group said Australia’s laws on internet censorship were among the most restrictive in the western world.

“No government should have the right to refuse its citizens access to information solely because they perceive it to be ‘unwanted'”, said Anonymous. “Indeed, the only possible interpretation of ‘unwanted content’ is content that the government itself does not want to be seen.”