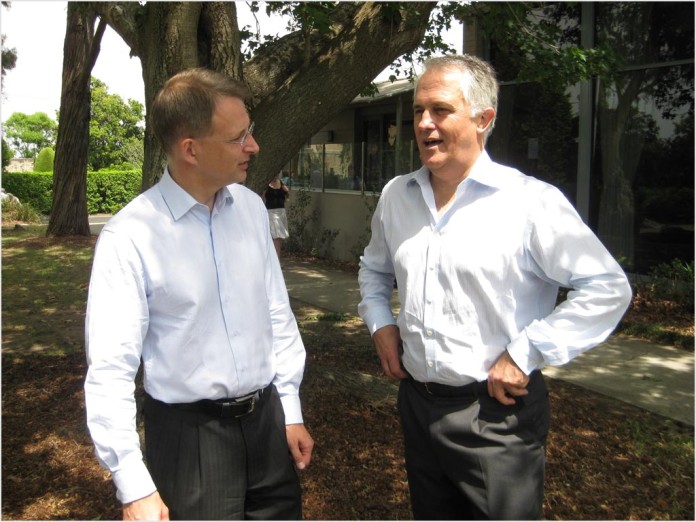 news Senior Government Minister Paul Fletcher has taken a pickaxe to Labor’s previous funding model for the National Broadband Network, describing it as “spectacularly incompetent”, despite the fact that the Coalition itself admitted during the recent Budget that it had its own NBN funding black hole.

Yesterday Paul Fletcher, Minister for Major Projects, Territories and Local Government, gave a major speech to the Australia-British Chamber of Commerce on the topic of infrastructure investment.

In the speech, Fletcher launched an extraordinary attack on the previous Rudd Labor Government, for what he said was its bungled handling of the NBN project’s finances, linking that project to Labor’s recently announced proposal to for a $10 billion financing facility for Infrastructure Australia.

“Of course this is not the first time Labor has made such an irresponsible suggestion about investing in infrastructure,” Fletcher told the audience.

“Announcing the National Broadband Network in April 2009, Kevin Rudd promised that it would be “operated on a commercial basis … and involve private sector investment.”

“In fact, in one of the most spectacularly incompetent pieces of financial advice ever given by a politician, Kevin Rudd recommended that mums and dads should invest in the NBN, with his press release stating:”

“The Government’s investment in the company will be funded through the Building Australia Fund and the issuance of Aussie Infrastructure Bonds (AIBs), which will provide an opportunity for households and institutions to invest in the national broadband network.”

Fletcher said that Labor “soon dumped” its commitment to seek private sector investment for the NBN, after “receiving advice in the McKinsey-KPMG Implementation Study that private investors would regard the project as too risky and hence taxpayers would need to provide one hundred per cent of the equity”.

“Troublingly, though, Mr Shorten and Mr Albanese today are peddling the same fiction that Kevin Rudd tried to peddle with the NBN – that in some way through financing tricks they can deliver infrastructure which does not have to be funded by the taxpayer,” Fletcher said.

However, Fletcher’s comments come as the Coalition’s own NBN funding credentials are strongly under attack.

The Coalition Government has maintained since the 2013 Federal Election that it would cap the public’s equity contribution to the NBN project at $29.5 billion, and that its final payment of $8.8 billion to the company would be its last.

To fund the rest of its planned rollout through to 2020, the recent Federal Budget notes that the NBN company is expected to raise debt from external markets of between $16.5 billion and $26.5 billion (with a base case of $19.5 billion) to complete the rollout of its network.

However, the Budget also warned that this may not be as easy as expected, and that the Government may need to step in, either to provide “interim funding support” or to help the NBN company raise the debt itself (for example, through guaranteeing its debts). The NBN company is expected to run out of money by the end of the 2016-2017 financial year.

Under sustained questioning several weeks ago in a Budget Estimates session, Finance Minister Mathias Cormann said the Government did not yet have the answers on the issue, despite having been aware of the problem for some time. The Government has established a taskforce to deal with the issue.

Under Labor, the NBN had been expecting to make a return on the government’s investment of about 7 percent. But the reduced profitability of the Coalition’s Multi-Technology Mix model and higher than expected costs have reduced this figure substantially.

It is not currently clear if the private sector will see the project as financially worth investing in, based on the Coalition’s MTM model.

opinion/analysis
Oh, Paul Fletcher. Not the … best time to be criticising the NBN company’s finances, when the Government itself has just confessed to a rather large issue on that front itself.