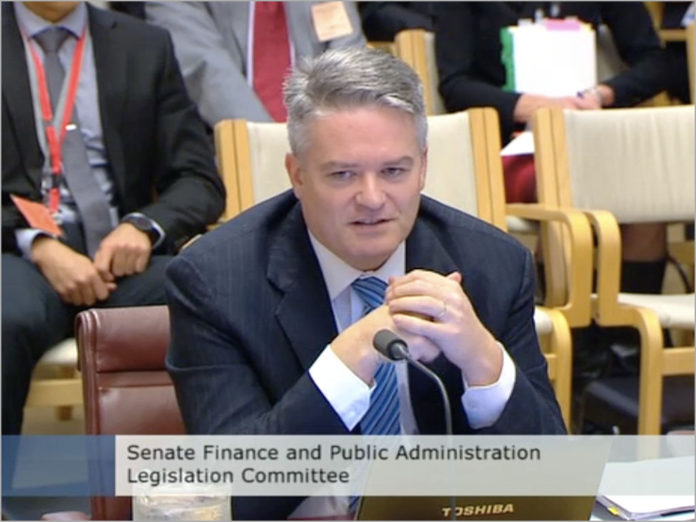 news The Federal Government this morning was forced to admit it did not yet know how the NBN company would fund the remainder of its rollout and operations through to 2020, with public sector funding drying up and an unclear situation with relation to the NBN company’s ability to borrow money privately.

In this week’s Federal Budget, the Government revealed it had put together a special taskforce to determine how to fund its modified rollout of the National Broadband Network, with the project’s costs ballooning and the public purse running dry of funds to support it.

The Coalition Government has maintained since the 2013 Federal Election that it would cap the public’s equity contribution to the NBN project at $29.5 billion, and that its final payment of $8.8 billion to the company would be its last.

To fund the rest of its planned rollout through to 2020, the Budget notes that the NBN company is expected to raise debt from external markets of between $16.5 billion and $26.5 billion (with a base case of $19.5 billion) to complete the rollout of its network.

However, the Budget also warned that this may not be as easy as expected, and that the Government may need to step in, either to provide “interim funding support” or to help the NBN company raise the debt itself (for example, through guaranteeing its debts).

Under sustained questioning this morning in a Budget Estimates session, Finance Minister Mathias Cormann said the Government did not yet have the answers on the issue, despite having been aware of the problem for some time.

Cormann stated that it remained government policy to cap public investment in the NBN company at $29.5 billion, and the Department of Finance revealed that it had brought in financial advisory firm Lazard at a cost of $500,000 to assist with determining how the NBN company could raise the rest of the money it needs.

Lazard has been working on the issue with the NBN company and the Departments of Finance and Communications since late 2015 — about six months — but neither Cormann nor the Finance officials were able to confirm the outcome.

“We’re only going to be in a position to make relevant judgements when we cross relevant bridges,” Cormann said, in response to questions from Shadow- and former Finance Minister Penny Wong.

A Finance official confirmed “some work” had been carried out by Lazard.

Cormann said: “The equity cap is in place for $29.5 billion’ our intention is for the NBN to source the remaining funding requirements by sourcing debt from external markets. We’ve raised that very clearly, and we believe, we’re confident that that will be able to be achieved.”

However, the Minister added a rider: “We’re being open and transparent in disclosing that if certain things that we intend to happen, and believe will happen, don’t happen, then obviously we’ve got to make some further decisions.”

Cormann said the Government “can’t possibly predict” at this stage what the outcome of the process might be.

Wong pointed out that there was speculation that the NBN company would not be able to raise the required amount of debt from the private sector, forcing the company back on government support to complete the NBN. The Labor Senator pointed out that the NBN company was only currently expecting to make a return on the Government’s equity investment of 2.7 percent, which would be too low to attract private funding.

In response, Finance Deputy Secretary John Edge stated that the interest rates on debt would not correlate with the internal rate of return figure of 2.7 percent.

Finance Department Secretary Jane Halton said the Department was not in a position yet to comment on the matter, as preparatory work on the debt raising was “not complete”.

opinion/analysis
You would have thought that the Government and the NBN company would have seen this multi-billion dollar black hole coming and would have done more work on this issue by now … or at least kicked Lazard into gear over the past six months that they’ve been contracted to examine the situation. The fact that they appear not to have done so is quite concerning, to say the least.

Will the NBN company be able to afford to finish its network construction without extra government funding? Right now we simply don’t know.