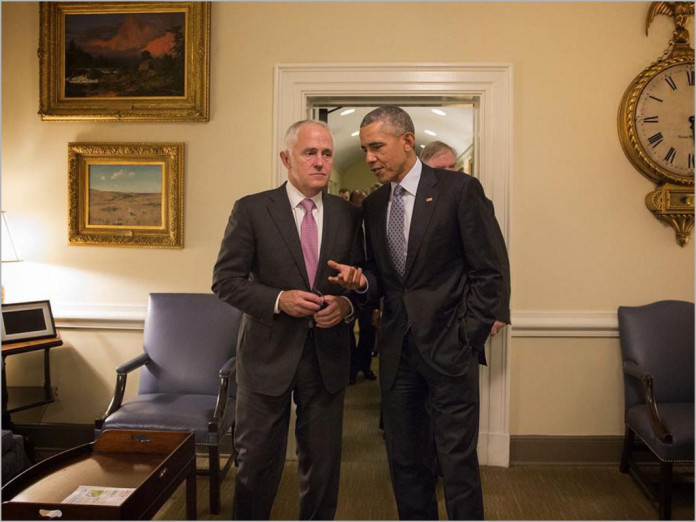 news Prime Minister Malcolm Turnbull overnight told business executives in the United States that he would be lobbying US Congress to pass the controversial Trans-Pacific Partnership treaty during his visit to Washington DC, despite recent reports claiming that the treaty will deliver very little benefit to Australia.

The TPP is a controversial trade agreement among twelve Pacific countries which reached agreement in early October last year after years of negotiations. The treaty is controversial because it forces countries such as Australia to adopt rules such as investor-state dispute mechanisms which can allow corporations to sue governments for taking certain actions, as well as introducing new intellectual property controls.

Digital rights activists globally have fought hard to block the TPP over the past seven years that it has been being negotiated. One of the last chance to do so appears to be in the United States, where the US Congress has yet to formally ratify the treaty and many MPs on both sides of the US Congress oppose it.

Overnight in the US, Turnbull — currently on his first visit as Prime Minister to the nation’s capital to meet with US President Barack Obama and others — spoke at a breakfast event held by the US Chamber of Commerce.

In the speech — available in full online — Turnbull praised the TPP in strong terms.

“I know that TPP is a controversial issue in this city,” said Turnbull. “But I’d simply say this – the TPP is a very critical part of America’s continued presence in the Asia- Pacific.”

The Prime Minister said the “ingenuity, the entrepreneurship” of American companies had created the “digital world” that existed today.

“Americans should be so proud of what they have achieved,” he added. “So proud of the prosperity their commitment to freedom, to open markets, to rule of law around the world has delivered. And so confident, that as those markets are opened, their businessmen and women, their entrepreneurs, their scientists, their engineers will be able to compete with the best – and outpace most of them.”

“The reality is, the TPP offers opportunity to the United States. There is very little at risk from freedom for such a strong, innovative economy as this. And there is so much to gain in our region because I say to you that the more we can tie the economies of our region together – the more connected they become, the more transparent they become, the stronger and more reliable the rule of law is in each country, the more of that interdependency – the greater the cost of anyone seeking to disrupt them.”

For these reasons, Turnbull said, when he was speaking to US legislators “later today”, he would be ” encouraging them to support the TPP”.

In a joint press conference with Obama, Turnbull also mentioned the TPP.

“It is much more than a trade deal,” Turnbull said. And I think when people try to analyse it in terms of what it adds to this amount of GDP, that’s important, but the critical thing is the way it promotes the continued integration of those economies. Because that is as important an element in our security, in the maintenance of the values, which both our countries share as all of our other efforts, whether they are in defence or whether they are in traditional diplomacy.”

Obama also explicitly mentioned the TPP during his conference with Turnbul.

“We’ll have a chance to talk about TPP,” he said, with respect to Turnbull. “We are both part of the driving force that created this rules-based system that is now being prepared to ratify among the various nations. It is going to be good for our economy. It is going to be good for our workers and our businesses. And it reaffirms that in order for us to thrive in the 21st century, particularly economies that are respectful of rule of law and concerned about labour rights and environmental rights, it’s important for us to be making the rules in this region, and that’s exactly what TPP does.”

“And I know that the Prime Minister has an agenda to spur additional innovation and investment in science and technology in Australia, which in this economy is going to be vital for any economy to succeed. So I’ll be interested to hear his plans, and maybe offer my thoughts about the work that we’re doing to continue to make sure that our economy is a dynamic, knowledge-based economy.”

The Prime Minister’s advocacy of the deal to the US Congress comes as the World Bank has recently released a report purporting to show that the TPP would barely advantage Australia, boosting Australia’s economy by only about 0.7 percent by 2030. The United States will similarly not benefit strongly from the TPP, while other countries — such as Vietnam, Malaysia and New Zealand — will reap more rewards.

Separately in the US, the Prime Minister also announced new measures to promote ties on cyber-security between Australia and the US.

opinion/analysis
Not surprising to see Turnbull advocating for the TPP — but it is a little disappointing. Australia does not stand to gain much from the TPP, according to the World Bank — and it sure as hell does have a lot to lose.