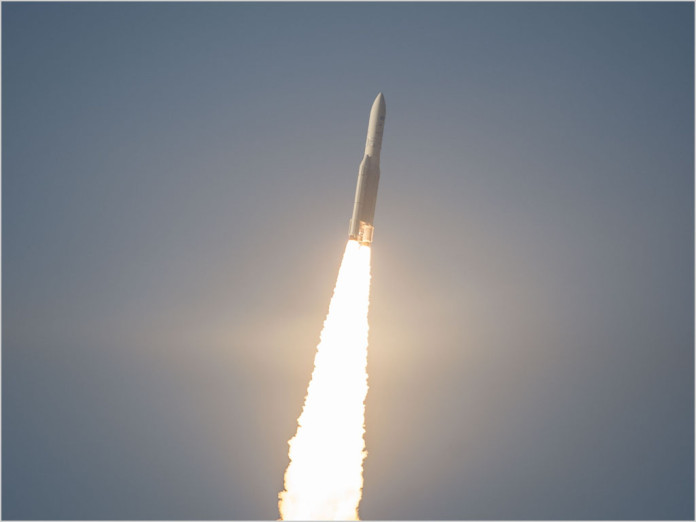 This morning, something remarkable happened.

From an isolated location close to the coast in the small South American country of French Guiana, a few Australians, with support from many people from other countries, successfully blasted a rocket weighing some 750 tonnes into orbit around the Earth, carrying a payload of some 6.5 tonnes.

Once in space, the payload will find its correct position and then unfurl, leaving a piece of incredibly complicated electronic infrastructure sitting permanently in the skies above Australia.

The launch was an incredibly explosive event, with many tonnes of fuel creating a huge blast which hurtled the rocket and its payload from the ground. This amount of noise and power feels appropriate to the herculean task which resulted in the energy released this morning.

Along the way to this journey, there were people who said that this could not be done — that the engineers behind this project had not properly obtained the correct orbital positions for this hunk of metal and silicon.

But that was not true. The engineers had.

There were also people who said that there was no need to send a new rocket hurtling into space to deliver this piece of infrastructure to sit in the heavens so far above the Australians who crawl on the Earth underneath it. They said existing satellites could provide sufficient capacity.

But that was also not true. The engineers were right. Existing satellites were not enough.

There were people who pointed out the risks of this launch. The rocket could explode before it even got off the ground, they said. Or it could explode in mid-air. Something could go catastrophically wrong, costing Australia hundreds of millions of dollars.

But it didn’t. The engineers had set up the rocket correctly.

The Australian engineers who put this plan together were not part of a huge, well-established company with decades of experience launching satellites into orbit around the Earth. They did not have the luxury of knowing that they could get things wrong and try again.

They were not involved in this effort for money, career advancement or personal glory. There is no doubt that some of them took pay cuts or gave up other opportunities to come to the team that launched this satellite this morning. They knew that they would be working extremely hard — around the clock at times — without the backing of a large company, and that they would be creating much of this project from scratch, without the benefit of established procedures.

They knew that if this project was to succeed — if they were to be able to launch a modern communications satellite into orbit to serve Australia’s rural broadband needs for much of the next century — that the effort would succeed or fail purely on the strength of their knowledge and skills. It would be their personal mental effort — their thinking — that would get this satellite built and launched into the sky.

If the rocket blew up on the pad or in mid-air, or if the satellite did not work, it would be because they had made a mistake in their calculations. The project lived or died on their engineering skill alone.

And yet they came to join the NBN company to build satellites. They believed in its vision. They came to serve the public. They knew that a job needed to be done, so they stepped up. They put their names forward and shouldered the responsibility.

Along the way they have endured much. They have sat silent as politicians ridiculed them and their effort. They have answered a thousand incessant questions about the NBN satellite project from people who have no engineering background. They have spend six years doing rigorous planning, considering in exhaustive detail all of the things that could go wrong.

And yet they did endure.

This morning, a bunch of NBN company engineers watched as a 750 tonne rocket delivered a 6.5 tonne payload into orbit over Australia.

Their efforts succeeded. Their calculations were correct. Nothing went wrong.

The end result will be remarkable. Those years of effort will translate into an incredible upgrade of broadband infrastructure to rural and remote Australia. All around this fair land, Australians of all backgrounds will have their broadband speeds massively upgraded. The benefits of this morning’s launch will be felt for many decades. This launch will create a huge impact.

The politicians are already celebrating this victory. It is their faces that will be on television today, with incredible video footage of a high-powered rocket reaching for the skies in the background. It is their voices that will be telling Australia the news of the successful launch. They will continue to take credit for everything that has gone right today and will continue to go right in future.

But this article is not for them.

This article is for all the engineers who made this project possible.

You faced an incredibly difficult task, in very difficult circumstances. You had to defeat a thousand obstacles to make this morning’s NBN satellite launch happen.

And yet, you prevailed. Your minds were strong. Your calculations were correct. Your relationships with your partner companies held up. You chose your equipment wisely. You researched thoroughly. You did your job. And you did a good job. (And, of course, for Satellite #2, you will do it all over again.)

Nobody knows better than an engineer that a good job is truly its own satisfaction.

But, for what it’s worth, I also say to you now: Thank you. Thank you, very much. From every Australian who currently has poor broadband, thank you. From everyone who has ever had their access to the Internet limited, thank you. And from the children of the future, thank you.

From this day on, whenever Australian engineers are facing a tough task, they should look up into the skies and remind themselves of the power of the Australian mind. If Australian ingenuity can put such a hunk of incredibly complex communications infrastructure into orbit to serve our broadband needs, purely on the strength of some clear thinking and a lot of hard work, then we truly can do anything.