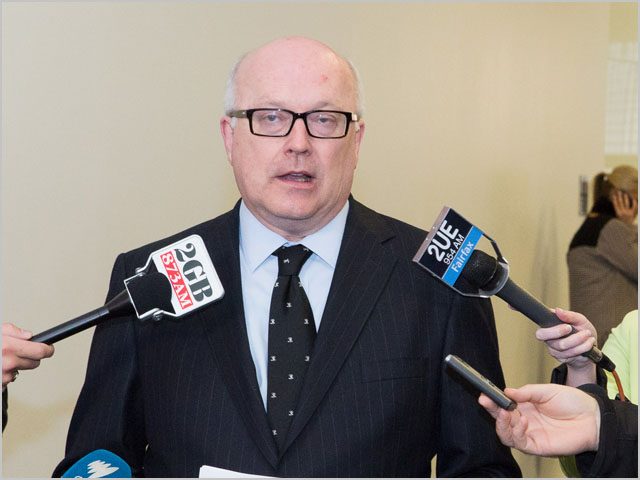 news Attorney-General George Brandis today appeared to back a scheme proposed by a coalition of most of Australia’s major ISPs which would see the issue of online copyright infringement handled through Australians being issued with warning notices after content holders provided evidence that they had breached their copyright online — and the door opened for ISPs to hand over user details to the content industry if the behaviour continued.

The scheme was proposed in November 2011 by a coalition of ISPs including Telstra, Optus, iiNet, Internode and Primus, but not TPG, Dodo or Exetel. It was developed through collaboration with
network equipment manufacturer Ericsson and industry groups the Communications Alliance and the Internet Industry Association.

At the time, the group of ISPs noted that the scheme would require ISPs to forward “education and warning notices” to customers whose broadband connections have been detected undertaking activity which “might” infringe copyright laws. Once a customer had been forwarded three warnings and one education notice, ISPs would send what is terms a “discovery notice” to the account holder, warning them that they have apparently failed to address issues set out in the previous notices and their details may be subpoenaed by the copyright holder which had filed the complaint.

Brandis has previously avoided commenting on the Coalition’s policy regarding online copyright infringement. However, in a landmark speech given in Sydney to the Australian Digital Alliance Copyright Forum (the full text is available online), the Attorney-General addressed the issue directly.

“While, as I said before, I do not believe the fundamental rationale of copyright changed with the internet, I am of the view that the internet poses a particular challenge in the area of online piracy,” the Liberal Senator said. “The illegal downloading of Australian films online is a form of theft. I say Australia films, but of course the illegal downloading of any protected content is a form of theft.”

“Some stakeholders have sought the introduction of laws aimed squarely at the scourge of online piracy. While I am sympathetic to their views and am interested in examining new measures that will cut rates of online piracy in Australia, I am not unmindful of the policy challenges of developing the most efficacious regime to do so.”

Brandis said that it had previously been thought that Section 101 of the Copyright Act, which provides that an entity which authorises the infringement of copyright without the copyright owner’s permission is liable for that infringement, could be reformed to deal with this issue. “However, the High Court’s decision of 2012 in the iiNet case changed the position,” he said.

“The Government will be considering possible mechanisms to provide a ‘legal incentive’ for an internet service provider to cooperate with copyright owners in preventing infringement on their systems and networks. This may include looking carefully at the merits of a scheme whereby ISPs are required to issue graduated warnings to consumers who are using websites to facilitate piracy.”

While Brandis did not specifically mention the ISPs’ 2011 proposal, the items he listed dovetail substantially with the ideas proposed at that stage. Brandis noted that in general he had a focus on industry self-regulation.

“Most importantly, in framing any enforcement reforms, my preference would be to facilitate industry self-regulation, as opposed to active and continuing government regulation,” he said. “Industry participants are in the best position to develop a flexible, cooperative self-regulatory approach tailored to particular industry needs. Industry cooperation is a key element in tackling online piracy, and I will continue to encourage industry participants to work together to overcome the outstanding issues in contention.”

The Attorney-General added that Australia has international obligations with relation to the issue, and noted that that the Government would not be seeking to burden ISPs beyond what is reasonably necessary to comply with appropriate domestic and international obligations. “As well, I would like to emphasise that this would not put Australian ISPs at a disadvantage by comparison with their counterparts internationally as many overseas jurisdictions have the concept of authorisation liability, secondary liability or similar, which are intended to capture ISPs,” he said.

opinion/analysis
I have mixed feelings about Brandis’ extremely carefully worded comments on this issue today. When the ISPs proposed this scheme back in 2011, I was strongly against it. At the time I wrote:

“The anti-piracy scheme proposed by the ISP industry this afternoon as a response to online copyright infringement through platforms like BitTorrent opens the door for content owners to start taking hundreds of thousands of Australians to court for minor offences such as downloading a handful of films or TV episodes.

… The most ironic thing about this issue is that it should be obvious by now that legitimate commercial models for Internet content exist. In 2011, the music industry is suing less people as it’s making an absolute mint through platforms such as Apple’s iTunes. Digital book publication is booming through Amazon’s Kindle store. And in the US, the incredible success of movie and TV on demand platform Netflix has demonstrated starkly how much Internet users will spend — a lot — if they are able to pay for whatever online content they want, when they want to.

The fact that they are not willing to do so indicates a stunning lack of loyalty to the customers who have earnt them billions of dollars in revenue over the past several decades.”

However, it is also true that Brandis’ comments today represent an extraordinarily even-handed approach to the issue, noting concerns from all sides and placing the Attorney-General squarely in the middle of the debate.

It had been feared that a hardliner like Brandis would take a very tough approach to Internet piracy. Instead, Brandis has taken a middle of the road approach. He has avoided any implication that users could have their Internet connections terminated for infringing copyright. And he has avoided placing direct legal responsibility onto ISPs with relation to the issue.

Instead, he has followed the path of both industry self-regulation and taken into account the High Court’s decision in the AFACT versus iiNet case, recommending that ISPs be responsible for educating users about online copyright infringement and for providing their details to rightsholders through the emerging subpoena process, but not for preventing or taking responsibility for the copyright infringement itself.

This is a wise choice, admittedly within the current limited framework that this issue is being discussed in. It places responsibility where it belongs — on the head of the infringing users — while still giving them a chance to mend their ways. And it forces rights holders to stump up a substantial burden of legal evidence through the courts to show that users have infringed their copyright.

Users will still not be happy with such a scheme, especially if it leads to the mass lawsuits we’ve seen in the US and which we’ve seen hints of in Australia. However, one suspects that it’s the appropriate role for the Government to take. If copyright has been infringed, Brandis appears to be saying, let the courts deal with that. Let the ISPs play an appropriate role in education and, where necessary, providing evidence to courts of user misdemeanours, likely through the emerging subpoena process. And let the overall burden remain on the heads of the rights holders.

None of this solves, of course, the underlying cause of piracy to begin with — the abject failure of major corporations to make their content available on equitable terms. And Brandis could do a lot more — a lot, lot more — to deal with this issue. He could, for a start, mention that consumers’ rights were important at all, instead of focusing on how industry could handle the situation.

In addition, perhaps I am reading too much into his comments — perhaps Brandis is using this speech as a smokescreen for future punitive action against copyright infringements. We’ve seen this before from the Coalition. Many will recall how Australia’s political class does not appear to be very trustworthy right now at matching its actions to its words.

However, on the face of it, Brandis’ comments this morning regarding online copyright infringement were not terrible. And, as sad as it is, that may just represent a victory for ordinary Australians, with this specific Attorney-General.