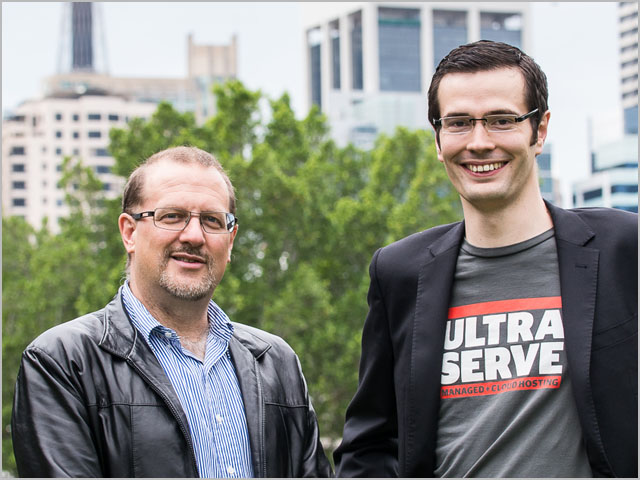 news Internode founder Simon Hackett (pictured, left) has made another major investment in an Australian technology company, with the beneficiary this time around being cloud computing and managed hosting services group UltraServe, which has been in operation since the year 2000.

Hackett is one of the most recognisable faces in Australia’s technology sector, courtesy of his role leading Adelaide-headquartered national broadband provider Internode for several decades, as well as involvement in numerous technology-related endeavours such as bringing the first Tesla electric car to Australia and more.

The executive sold his company Internode to fellow top-tier Australian ISP iiNet in December 2011 for $105 million, the majority of which went into Hackett’s pockets, as he was the primary shareholder of Internode. Since then he has been focused on assisting NBN Co as a board director as well as investing in local tech companies such as electric race car company eV Race Systems and setting up IT startup incubator Base64.

In a statement today, Hackett and UltraServe announced the entrepreneur would make a “multi-million-dollar” investment in the company to help accelerate its growth. UltraServe founder and chief executive Samuel Yeats (pictured, right) has agreed to sell a 40-per-cent stake in his 14-year-old company to Hackett as part of the deal.

Sydney-based UltraServe began its operations in 2000 and has developed to become a market leader in the Australian cloud & managed hosting services industry. The company claims it was the first company to launch an Infrastructure as a Service (IaaS) cloud computing product in Australia (in 2009). UltraServe has thousands of servers under management for customers that include some of Australia’s leading ecommerce retailers including Catch of the Day, Deals Direct, Appliances Online, General Pants and Radio Rentals.

Over the years, UltraServe has continued to broaden its business model through key channel partner relationships such as Amazon Web Services and hybris, a SAP company. which will continue to shape the direction of the business moving forward. UltraServe is 100 per cent Australian-owned at this point.

The multi-million-dollar investment will enable UltraServe to accelerate its international growth servicing e-commerce retailers, including in Europe and Asia. UltraServe will also establish its Lighthouse customer management platform under a standalone company Orchestrated to support telecommunications carriers and Managed Service Providers (MSPs).

Hackett said he was investing in UltraServe as it was the right company at the right time. “UltraServe has smart leadership, a strong market presence and unique IP that will scale internationally,” he said. “As companies embrace cloud infrastructure to provide more on-demand services for their customers, UltraServe has the opportunity to transform its Australian achievements into international success and also to leverage its hard-won expertise into a new segment of the market.”

Yeats said UltraServe would benefit from both the extra working capital and from the credibility of having Simon Hackett as a major investor. “This investment enables us to execute on our expansion overseas, initially in Europe and further into Asia,” he said. “We can now take advantage of Amazon Web Services’ global Cloud infrastructure and other cloud platforms to expand very efficiently in other countries.

“In addition, UltraServe has built a xloud infrastructure orchestration system called Lighthouse, with some very unique features, that lets us offer a managed services layer across Amazon, VMware and other clouds, which equips us to keep our vendors honest.”

“We are now commercialising Lighthouse for use in the telco and Managed Service Provider and are working closely with some very large organisations. When the inevitable question about backing is asked, Simon’s investment will give us additional credibility and offer greater assurance to customers. Simon’s involvement will leverage his experience and his passion for the telco sector.”

Simon Hackett’s long-time colleague John Lindsay – former Chief Technology Officer for both iiNet Limited and Internode – will take a seat on the UltraServe board and work closely with the company’s management to develop its services to even better meet the needs of the carrier and ISP markets.

opinion/analysis
It’s good to see Hackett reinvesting his funds in the local IT industry, but there are a few things here that bug me.

Firstly, it seems apparent that UltraServe must not have been worth that much, if Hackett was able to pick up 40 percent of the company for only a “multi-million-dollar” investment. I would say that it seems likely here that Yeats has been looking to cash much of his long-term ownership out of the company out and that Hackett got a relatively good deal on the stock.

UltraServe is not a young company. It’s fourteen years old. What this means is that it cannot really be classed as a startup; it’s more of a medium-sized business at this point. The company is in a growth industry (cloud computing), but it appears to mainly be leveraging other platforms such as that of Amazon Web Services. This means that its own intellectual property and capacity to grow is therefore probably relatively limited. Hence why it hasn’t already been bought out — if it did have huge growth prospects, other investors or acquirers would probably have been sniffing around earlier. And hence its low valuation.

Secondly, the amount of stock Hackett has bought is also unusual. A 40 percent stake isn’t really an investment — that’s more like a direct partnership. I don’t usually see 40 percent investments unless the company making the investment is eventually planning to buy the whole company out, and Hackett is certainly not planning to do that.

With 40 percent, Hackett will be much more than a disinterested observer in UltraServe. He is one of the company’s principal owners and will be required to keep a much closer eye on it than he would otherwise do. It’s not surprising, in this context, that he has asked an old friend, Lindsay, to sit on UltraServe’s board.

If Hackett was still part of the iiNet/Internode conglomerate, I would have said that this kind of partnership was strategic; Hackett could have opened the door for partnership and bundling opportunities for UltraServe. But with Hackett departed from iiNet, that door is probably relatively closed now.

I suspect that Hackett personally likes UltraServe and is interested in the company, just like he is personally interested in electric race car company ev Race Systems. This makes Hackett an unusual investor and not one who is likely to fit the standard angel/venture capitalist mould of dispassionate but competent support. Is this a good thing? If it leads to more passionate and invested management of the companies Hackett gets involved with, then yes. But if it results in the investment process becoming a little too personal, then it definitely also has its pitfalls.

Nobody can accuse Simon Hackett of being boring. But we must also consider that as an investor, he doesn’t actually have that much money — probably close to $100 million. It will be interesting to see if he is able to increase the value of his portfolio through his investments over the next decade or so — or whether he is a little too personal about how he goes about investing his capital, leading him into pitfalls. Interesting times :) We wish him good luck.