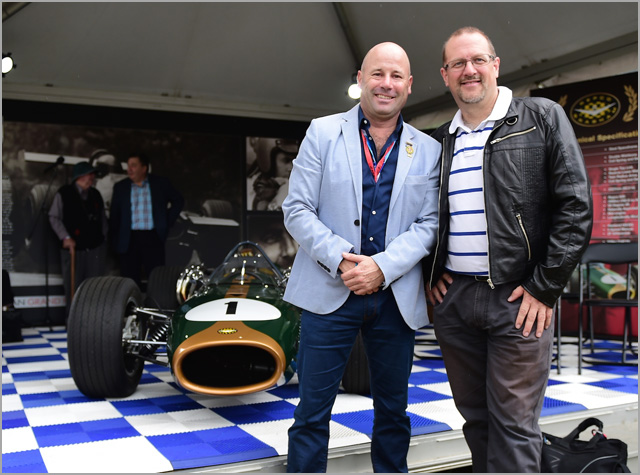 Hackett is well-known as the owner of the first Tesla Roadster to be imported into Australia. The executive sold his company Internode to fellow top-tier Australian ISP iiNet in December 2011 for $105 million, the majority of which went into Hackett’s pockets, as he was the primary shareholder of Internode.

In a statement released this morning, it was announced that a new company, eV Race Systems, had been formed. The company’s site lists Hackett as a co-founder and investor, with former Internode chief financial officer Sean Habgood acting as a director and CFO of the startup. Rudi Tuisk (below, left at the Grand Prix in Melbourne this week with Hackett) is listed as the company’s founder, chief executive and technical director. The executive was formerly the chief motorsport protagonist and Australian director of Tesla, the leading global electric car manufacturer based in the US. Also listed as a co-founder and chief marketing officer is Craig Davis, the former brand director of Tesla’s Europe division.

The statement noted that the company aims to put its first electric race cars on the track later this year, with a focus in Europe and Asia. Rudi has been the architect and technical director behind the design for the new class of electric racing, while Hackett has provided seven-figure bootstrap funding (more than $1 million) to get the concept on to the starting grid.

Hackett said Australia could play a key role in designing and engineering high performance electric vehicles. “Electric vehicles represent a sunrise industry in which Australia can be a real leader,” he said. “Australia has convenient proximity to Asia for cell supply and access to innovative and exceptionally talented engineers. As we’re saying goodbye to Toyota, Ford and Holden assembly plants, Australia has the opportunity to embrace and invest in EV (Electric Vehicle) technology that can underpin new local manufacturing in coming decades.”

The planned 1000kg eV Race Systems car with 400 KW and 800 Nm Torque will accelerate from a standing start to 200 km/h in less than eight seconds, according to the company.

Tuisk, who was Tesla Motors’ Chief Technician in Europe and Asia Pacific during his five years with the revolutionary company, said eV Race Systems aimed to deliver a “rule-breaking race car”. “At Tesla, we pushed the boundaries of EV technology in many environments and race circuits. At eV Race Systems, we’re out to develop and deliver the most exciting race car to drive and the most exciting race car to watch.” he said.

“To use motorsport as an emotional lever, you need a car that’s very fast, convincing and extremely exciting; action packed! We’ve spent the past year designing just such a vehicle, with some of the best engineers in the world. We are very excited by the data we are seeing right now. The DNA of our car makes it super-exciting to drive. We’ve designed an action-packed, versatile, extremely powerful car that will provide awesome motorsport performance.”

The next step for eV Race Systems is the multi-million-dollar development of three to five prototype cars for demonstration in events later this year. Tuisk said electric race cars would drive some strong growth businesses during the next decade.“We should expect to see significant multiples of value in this space.” he said. “We look forward to releasing more information as it become as available.”