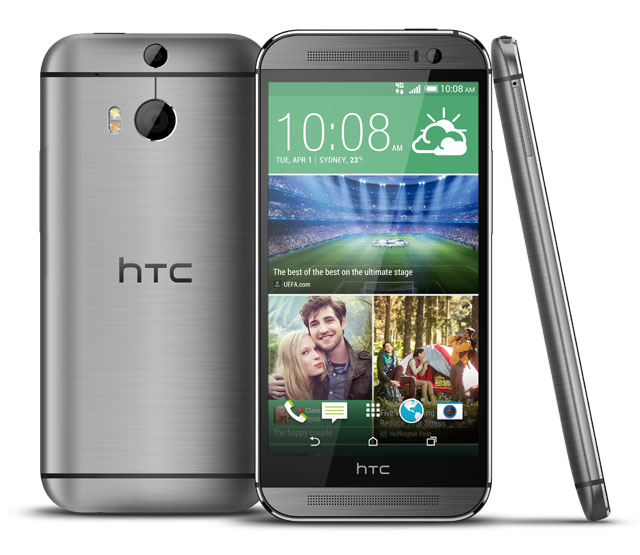 news Taiwanese consumer electronics giant HTC this morning revealed its latest flagship Android handset, the HTC One (M8) will be available in Australia from 1 April through all three of the nation’s major mobile carriers, with a bevy of enhancements to the popular model. But will the company’s latest phone be able to take on the Apple and Samsung juggernauts?

The One (M8) is the follow-up to last year’s popular One model from HTC. Like the original One, it’s a large form factor smartphone enveloped in a metallic case. Its display is sized at 5″, with a supported resolution of 1080p, and its processor is a quad-core Qualcomm Snapdragon 801 model running at 2.5GHz. It comes with 2GB of RAM and total storage of 16GB or 32GB, with a microSD card slot supporting additional storage up to 128GB. The One (M8) weighs a pretty hefty 160g, which is heavier than most handsets on the market, and it measures 146.36mm by 70.6mm by 9.35mm.

Some of the features specific to the One (M8) include the new ‘Duo’ camera, which includes a normal HTC Ultrapixel model and also a secondary camera to capture depth information in the photo (and allow post-photo focus changes), a five megapixel front-facing camera, and support for HTC’s BoomSound standard with large dual frontal stereo speakers with built-in amplifiers. The One also comes with HTC’s Sense interface on top of Android, and the BlinkFeed social networking and content application.

The One (M8) can also be fitted with one of HTC’s new Dot View cases, which displays basic notifications in a retro dot matrix style, while also allowing rudimentary user interactions. And the battery life on the One (M8) has also been further developed. HTC said in its statement:

“With the original HTC One (M7), HTC optimised power consumption so that you could get the most out of your phone. The new HTC One (M8) takes this to a whole new level making the battery power last 40% longer. Whilst normal power saving mode delivers a great experience, we have also included an Extreme power saving mode that makes your battery last even longer. Fully charged it will deliver 14 days’ worth of battery power, whilst still allowing you to receive calls, texts and emails – perfect for when you are travelling. Activated either manually or automatically, it delivers 60 hours of extra standby time at 20% power, 30 hours at 10% power and 15 hours at 5% power so, whether you are out late at night or hiking in the mountains, you never have to worry about running out of battery again.”

Peter Chou, CEO, HTC said: “In 2013 we introduced the best smartphone in the world, but we never stopped challenging ourselves and the status quo in this category. As pioneers in mobile innovation, we continue to design and build devices that will dazzle, inspire and transform the smartphone industry. Today I’m proud to launch the most stunning, intuitive and advanced handset that the industry has seen to date, the new HTC One (M8).”

All three major Australian mobile carriers this morning announced they would be stocking the One (M8) from April and would be offering it on various plans, as well as through pre-orders. The handset will sell in Australia for a recommended retail price of $899.

Early reviews of the One (M8) have been positive. The Verge wrote: “There are a lot of great Android phones on the market right now, but two stand out: the Nexus 5 and the new HTC One. The Nexus 5 is Google’s purest vision for Android, the One the platform’s most mature and developed form. I desperately wish it took better pictures, and I’m reluctant to buy or recommend it until it does, but I like absolutely everything else.”

opinion/analysis
Will the new One substantially challenge the two dominant handset ranges in Australia at the moment, the Galaxy S and iPhone series? No, I don’t think so. HTC has a few problems here which I think will hold this handset back.

In my opinion, the colour choices of the new One are also not ideal, particularly the gold colour, which reviewers have not been fans of at all. I haven’t handled the new One personally (I’ll get the chance to do that tomorrow), but from the pictures and video I’ve seen, the One lacks a little, aesthetically, when compared to models such as the Nexus 5 and iPhone 5S.

On the inside you’re still dealing with HTC’s annoying Sense UI and BlinkFeed, neither of which have attracted rave reviews, and reviewers have also noted that the phone’s camera doesn’t measure up to that of its rivals, although it does take good night shots, as the previous One did.

Overall, what we appear to continue to see here from HTC is that the company is just a notch below Apple and Samsung. The new One looks like a fantastic smartphone and appears to be close to the top of the market. It has a great screen, some of the best speakers on the market, great processing power and battery life, the latest version of Android and great network compatibility.

But it’s just a little heavier, doesn’t quite have the features its rivals do, has design which is slightly poorer (in my opinion), has a less streamlined UI, has a slightly worse camera and so on. And, of course, there is also the price. $899 is a lot of money for a smartphone when you can pick up a brand new Nexus 5 from $399 — less than half the cost for a smartphone which is arguably just as good.

I’ve been saying for quite a while now that Australia’s smartphone market is, for the most part, rapidly consolidating into two camps — Apple and Samsung. 12 to 18 months ago, companies such as HTC, Nokia and Sony had models which were good enough to be included in most people’s buying decision process. But now, with the top-end models we’re seeing from Apple and Samsung, I think most of the rest of the market is getting crowded out. Google’s Nexus line (through LG) will continue to be a popular and worthy sideline, mainly for technical purists (most ‘mainstream’ people I speak to have never heard of the Nexus 4 or 5, for example, while most tech-heads rave about them). But most other people I know are looking at Samsung or Apple.

It’s a pity. I have liked and owned HTC smartphones in the past. I like the company and I like competition in the mobile sector. I don’t like the feature bloatware approach you tend to find on Samsung’s phones, and I also want a larger screen size than you find on the iPhone. But I don’t think this smartphone from HTC is going to be the breakthrough the company needs to keep up with the Jones’s.

Of course, I would love to be wrong, and I’ll be the first to admit if I am. I would love the One (M8) to succeed, and I hope this model is everything in practice that HTC hopes it is. Strong competition in smartphones from HTC would benefit the entire market at this point, and especially consumers. At the very least, I suspect that the new One will succeed more than competing models from other (non-Apple or Samsung) manufacturers have been able to. I just suspect this won’t quite be the Samsung or Apple rival that many of us want to see from HTC.