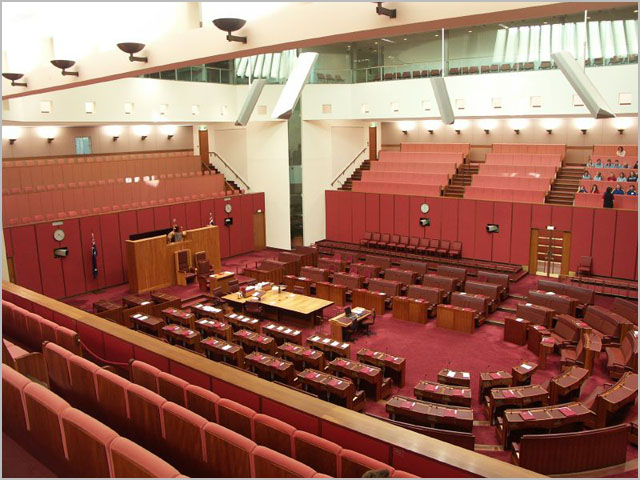 news The Greens and Labor teamed up in the Senate yesterday to successfully move a motion which would force the Coalition Government to table the text of the controversial Trans-Pacific Partnership Agreement before Australia signs the treaty.

In mid-November, Australian political parties and digital rights lobby groups erupted in outrage after a Wikileaks leak of the intellectual property rights chapter of the Trans-Pacific Partnership revealed Australians could be slugged with new draconian measures if caught infringing copyright online.

Yesterday in the Senate, the Australian Greens successfully moved a motion (with the support of Labor) that will bring greater transparency on the TPP. “Today’s result is an important step forward in compelling Tony Abbott to end the secrecy and hidden agendas that have defined his Government to date,” said Senator Peter Whish-Wilson, Australian Greens spokesperson for trade.

“Our order for production of documents will make the final text of the TPPA publically available before being signed off by Cabinet, so the entire Australian community can scrutinise this trade deal to ensure it’s more than just ‘free’ but is ‘fair’ for our nation. What is important about this achievement is that it will take the politics out of the TPPA process and end the secrecy around Australia’s biggest ever trade negotiations.”

“It was recently revealed in Senate Estimates, despite previous assurances to the contrary, that the Abbott Government is considering signing on to Investor-State Dispute Settlement (ISDS) provisions. These provisions and others within the agreement pose a real a threat to Australia’s public interest laws that protect our environment and rural industries, and underpin public health.”

“These revelations on the Abbott Government’s openness to ISDS provisions followed a leak of a single chapter of the agreement – one small piece of the TPPA puzzle – that showed the kind of damage that could be done by a secret deal. Tony Abbott should respect the will of the Senate and end the TPPA trade deal secrecy so a broad range of stakeholders can have their say on our nation’s future,” Whish-Wilson concluded.

The consumer group raised the money for the advertisement from among the more than 11,000 ordinary Australians who signed a CHOICE petition calling on the government to release the draft text of the trade agreement.

“Given the government’s reluctance to reveal whether consumers’ interests are on the table,CHOICE is stepping in to inform Australians about the talks that are dominated by US commercial interests,” said CHOICE CEO, Alan Kirkland in a statement issued today. “CHOICE is concerned that the final agreement will be signed off with no scrutiny from the Australian public and media. The only groups which have been given official access to the text are the negotiators, governments and the industry lobbyists of American corporations.”

“Under the US Government’s Trade Representative scheme, hundreds of so-called ‘cleared advisors’, mostly industry groups and companies, have had been able to access the negotiations. Meanwhile, everyone else has been locked-out – including Australian consumers. We are calling on the government to bring Australian consumers to the negotiating table – especially with so much at stake,” Kirkland concluded.