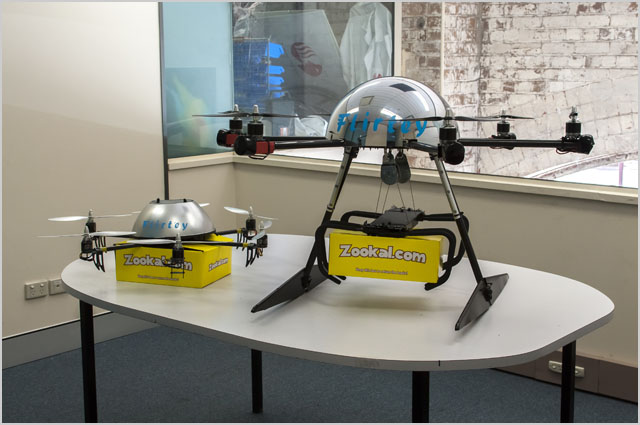 blog As many people will be aware, yesterday an Australian startup named Flirtey announced that it in March next year, it would launch a commercial drone package delivery service, using “fully automated drones” to deliver packages in inner Sydney through short flights. The first customer is to be textbook rental firm Zookal. You can find the company’s media release online here. Probably the key paragraph regarding the company’s claims:

“Zookal will be using Flirtey to deliver parcels free of charge, directly to a customer’s location. Customers within the drone zone will receive a notification on their smartphone that will enable them to track the parcel via GPS. They will then be able to receive the parcel directly at any outdoor location. This delivery method will significantly reduce waiting times from two to three days to as little as two to three minutes.”

The claimed drone delivery service has achieved a very strong level of media coverage, with articles regarding the service being published this week in major media outlets such as the Sydney Morning Herald, Business Review Weekly, TechCrunch and more. Most did not significantly question Flirtey’s claims.

In an effort to ascertain whether the company’s claims were accurate, last night your writer spoke at length to one of Flirtey’s founders. Without going into the specifics of the conversation, unfortunately, they were unable to satisfactorily answer our questions about the company and its plans. With this in mind, Delimiter recommends readers approach this story with caution. The story does not appear to be a hoax, but we do also do not yet believe the service being promoted by Flirtey is at the level where it can be considered a commercial service; rather, our opinion is that it would appear that the company is still in the research and development phase of developing its technology.

Any company seeking to launch a commercial drone delivery service in Australia over the next several years will face a number of large obstacles. Ensuring public safety, managing societal fears around public safety, obtaining permission from regulators such as the Civil Aviation Safety Authority, ensuring the security of the drone hardware (for example, in the case of theft), obtaining sufficiently detailed mapping information (in three dimensions), boosting the carrying power of the drones beyond current limited capability, driving costs below existing courier delivery services, obtaining suitable insurance and training staff in very complex and newly developed management technology are just some of the issues such companies will face.

Clearly, drone technology is advancing rapidly. Clearly, eventually, time-sensitive deliveries will indeed be conducted by some form of drone, as the technology becomes more sophisticated and costs are driven down. This is clearly where the technology is going, and that will be a wonderful thing. But in our opinion, that time is still quite a few years away, to say the least.