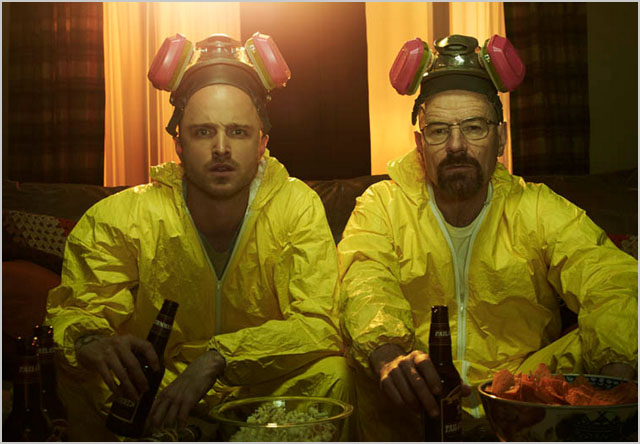 Correction: This article had initially stated the latest Breaking Bad season was available exclusively in Australia through Foxtel. This is not true: The latest episodes of the show are also available on iTunes very quickly after broadcast in the US.

news Australia has dramatically extended its lead over other countries when it comes to the levels of Australians pirating popular US television shows, according to new statistics released overnight by TorrentFreak, with the limited availability of such content in Australia believed to be driving the trend.

Last night, the series finale of popular AMC show Breaking Bad was released in the US through cable networks. The episode quickly made an appearance on popular file-sharing sites, predominantly using the BitTorrent protocol. According to file-sharing news site TorrentFreak, the show was downloaded more than 500,000 times just 12 hours after the first copy appeared online.

“Based on a sample of more than 10,000 people who shared the site via a BitTorrent client, we see that Australia is once again in the lead with 18 percent of the total,” the site wrote. “This means that a large group of Aussies prefer to torrent the episode instead of watching it on the pay TV network Foxtel. In the U.S. and the U.K the legal availability on Netflix couldn’t prevent people from pirating the final Breaking Bad episode either. With 14.5 and 9.3 percent these countries are second and third respectively. India and Canada complete the top five with 5.7 and 5.1 percent of the total.”

In Australia, Breaking Bad is distributed in new release through pay TV giant Foxtel, including through the company’s Internet-based streaming service Play. It is also available through Apple’s iTunes platform locally hours after it is broadcast in the US. The final half season of the show costs $24.99 for eight episodes through iTunes, meaning individual episodes come down at a price of $3.12 in aggregate. This situation means that there are quick and legal mechanisms for Australians to watch the latest episodes of Breaking Bad as they become available in the US.

According to figures compiled by TorrentFreak with respect to Game of Thrones in April this year, at that stage Australia was the third most prevalent nation for Game of Thrones downloads, with some 9.9 percent of those downloading the latest episode residing in Australia. On a per capita basis, due to Australia’s small population, this means that Australia is the world’s most prolific nation when it comes to pirating Game of Thrones. “The number three spot for Australia is impressive and with a population of just over 22 million people it has the highest piracy rate,” wrote TorrentFreak at the time. “Looking at other cities we see that most downloads come from London, before Paris and Sydney.”

The situation has generated substantial debate in Australia. In April, for example, US Ambassador to Australia Jeffrey Bleich published an impassioned statement appealing to Australians to stop breaching the copyright of US cable giant HBO by illegally downloading its popular Game of Thrones television show in record numbers.

However, those opposed to accessing popular US TV shows show through Foxtel or rival platform iTunes have frequently pointed out the technical restrictions inherent to such platforms. In addition, many see Apple’s iTunes as an overly restrictive platform which only deploys content to PCs and Macs — but not to dedicated set-top boxes.

IPTV player Quickflix has recently announced its intention to bring shows such as Game of Thrones to Australia more quickly.

opinion/analysis
Anyone surprised by these new figures about Breaking Bad downloads? I’m certainly not. Recently it seems that virtually everyone I know has gotten on the Breaking Bad bandwagon, and very few people I know are willing to buy the show through Foxtel or iTunes, due primarily to what they see as the technical limitations of those platforms. Most of my friends and colleagues are in their late 20’s or mid-30’s. They all have substantial disposable income and spend a solid proportion of it on entertainment and art. What this says to me is that there is a massive untapped market for great content in Australia — a market which is currently satiating its demand for shows like Breaking Bad illegally.

Personally, I don’t really believe there is a basis for pirating shows like Breaking Bad on the basis of what many see as the technical annoyances of platforms such as Foxtel and iTunes. I’ve downloaded quite a few pieces of content through iTunes (we have a PC connected to our TV in our loungeroom, as well as an Apple TV), and although it has a lot of annoyances and is quite expensive, the platform does indeed, at a basic level, function for its purpose. As I wrote in April this year with respect to the then-similar situation with respect to Game of Thrones:

Australians have been arguing for most of the past decade that high rates of local piracy were due to the fact that we simply couldn’t get the same content as easily and quickly as US residents could. It’s fascinating to me that we continue to pirate Game of Thrones at a record rate, despite the fact that the content companies have clearly listened to these complaints and have tried to rectify them with legal alternatives. What does this say about ourselves? That we want Game of Thrones for free no matter how much it cost the creators of the show to make it? This bears a great deal of thought.”

To draw a parallel with the video gaming industry, people still bought video games on PCs before Valve’s Steam platform came along — it was just more annoying, expensive and restrictive to do so. Now they buy more games than they did before, because it’s easier and cheaper. The TV industry doesn’t really have a ideal equivalent of Steam yet, and more people would buy more TV shows if it did, but that doesn’t mean there’s a legitimate technical justification for pirating TV content. You can technically get the newest Breaking Bad episodes legally — it’s just annoying to do so, and expensive.