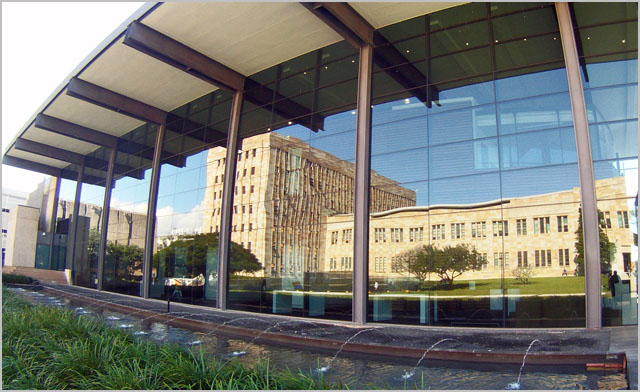 news The University of Queensland has revealed plans to deploy a significant swathe of private cloud infrastructure, as it ramps up plans to provide its individual faculties and divisions with a centralised pool of computing resources that can easily provision hundreds of virtual servers.

The university is the largest in Queensland and one of the largest in Australia, with some 44,000 students across four campuses, including 3,600 PhD candidates. It is a founding member of the national Group of Eight organisation of universities, which collectively account for 70 percent of all research income in Australia’s university system, enrole more than half of all higher degree (by research) students, and generate 80 percent of spin-off companies created by Australian universities.

Consequently, the university has a high and ongoing need for computing resources. Currently, much of its resources are provided by its centralised Information Technology Services (ITS) division, but individual faculties, schools, centres and institutes also support students and staff. The ITS division also hosts the IT security group AusCERT.

In a request for proposals document issued early this month and available online, the university noted that one of the most common services its IT staff provided was server virtualisation — usually delivered through VMware’s platform on a variety of servers and storage arrays. “This proposal is for the development of a university-wide resource to provide central server virtualisation services with ITS as a customer like any other OU rather than the sole owner of the resource,” the university wrote in its documents. “This resource would be available to all OUs (including ITS) on a chargeback basis with a target of the environment itself being self-funding within 18 months.”

The university said that its objectives for the server virtualisation project were to provide improved disaster recovery and business continuity functionality, reduce its overall datacentre footprint requirements, allow for faster server and service provisioning, drive increased uptime for applications, reduce UQ’s infrastructure costs through the sharing of resources, and possibly reduce its overall energy costs.

The server virtualisation platform will be overseen by a committee comprising the university units actively using and contributing to the proposed services; the committee will guide the strategy, architecture and design, funding and procurement, implementation and operations, and reporting and review of the service. This committee will report to the Director of ITS, Rob Moffatt, as UQ’s senior IT executive.

In its request for proposals document, UQ listed a number of specific requirements for its new virtualised infrastructure. For example, the university’s units must be able to self-provision new servers (including ‘networks’), templates must exist for simple virtual machine deployment, the specifications of virtual machines must be able to be flexible and there must be a chargeback facility to the units using the service. All of these stipulations are requirements which generally push virtualised server environments into what is commonly known as the ‘cloud computing’ paradigm — specifically, private cloud computing, as the facility will not be available to clients outside the University of Queensland.

The University also listed a number of other requirements for the service. For starters, the infrastructure concerned must remain in Australia, it should include flexible disaster recovery and backup options, it should feature compartmentalised management (so that each unit using the service can only see their own resources), and it would be desirable if the potential for units to manage multiple providers (for example, local infrastructure and infrastructure operated by an offshore provider such as Amazon Web Services) existed within a single user interface. Another platform mentioned by the university in its documentation is Microsoft’s Windows Azure environment.

In terms of its workload, the use of the infrastructure could be quite high. “The environment must be capable of supporting an initial payload of 400 virtual servers from any UQ [organisational unit], with the ability to simply, quickly, and cost-effectively expand as demand increases,” the university’s request for proposals stated.

The university also provided some general information about its current IT operations and environment in its request for proposal document. It appears as though most of its IT infrastructure is currently managed by its ‘Enterprise Support’ division, which itself contains five units — applications and identity services, core infrastructure services, enterprise provisioning, Microsoft services, and Unix services. ITS operates both normal servers as well as supercomputers for the university.

opinion/analysis
I really like what UQ is doing here, and I think this approach of a centralised private cloud facility to be used by faculties, schools and other units across the university will shortly become very much standard practice across universities right around Australia. The private cloud model, where self-service facilities involving standard templates, chargeback and disaster recovery are used, is perfect for universities, which normally run centralised IT departments providing services out to individual faculties and schools (often with their own embedded IT officers), in a hub and spoke model. The internal chargeback mechanism is particularly appropriate.