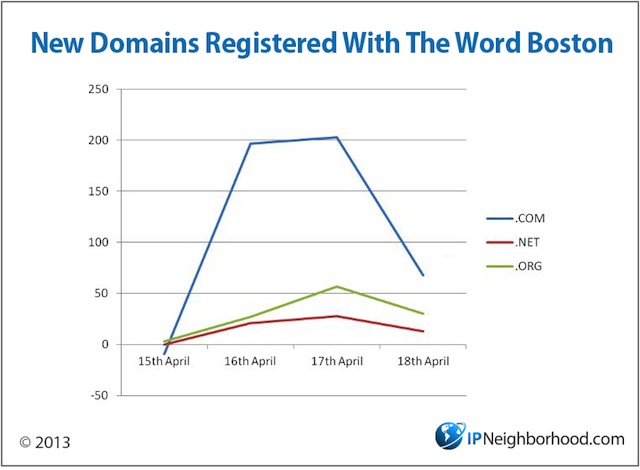 news Australia’s relatively tight domain name policies may have prevented opportunistic cybersquatters from cashing in on local disasters, but this week’s Boston Marathon bombing and Waco fertiliser explosion have had less luck avoiding cyber-squatters, analysis by a local domain-name specialist has revealed.

“In a somewhat bizarre way, you can see ads for Better Living Magazine on BostonBombing.org,” Johson notes wryly. “Every time there’s an event, these people come out of the woodwork and start registering names. We collect this data for our own business anyway, and don’t usually target these types of events – but this was such a big event that people jumped on it.”

The massive explosion of a fertiliser plant in Waco, Texas yesterday saw a smaller yet discernible spike, with 24 new .com domains containing the word ‘waco’ registered on April 18, and 16 new .com domains registered that day containing the phrase ‘fertilizer plant’.
A Whois.Net search revealed the registrant as Moniker Online Services, which is now soliciting bids for the domains and asking $US69.

When Delimiter checked, the domain bostonmarathonbombing.net was on sale for $US200, bombingboston.com listed as “make an offer”, and bostonbombings.com priced at $US500.

While the squatting isn’t illegal, it leaves a bad taste in the mouth for many, with Johnson noting that Australia’s stronger domain name registration regulations have prevented the kind of free-for-all that’s dominated the .com domain.

“It’s less likely that people would be able to get away with it in Australia,” Johnson says. “It’s more likely that they’ll go to an extension like .com where there are no rules.”

Policy rules and a reserved domain-name list are maintained by .au Domain Administration Ltd and require that registered domain names have some correlation to an Australian registrar.

“It’s a good argument for Australia and .au, and that’s why they’ve adopted that policy in preserving the name space. While I’m a fan of a free market, on the positive side it does act as a deterrent.”