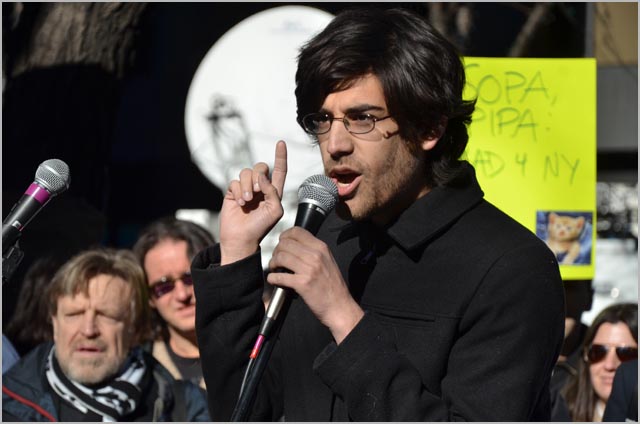 analysis In light of the death of internet activist Aaron Swartz, there is a need to reconsider intellectual property enforcement standards in the Trans-Pacific Partnership.

The 16th round of the Trans-Pacific Partnership negotiations are taking place in Singapore until March 13. There have been concerns that the Intellectual Property Chapter would “ratchet up IP enforcement at the expense of digital rights”. Maira Sutton of the Electronic Frontier Foundation fears that “the Trans-Pacific Partnership could turn Internet Service Providers into copyright cops, prompt ever-higher criminal and civil penalties for sharing content, and expand protections for Digital Rights Management”.

The case of Aaron Swartz highlights the need for a reconsideration of punitive and excessive intellectual property enforcement provisions in trade agreements.

An Elegy for Aaron Swartz
An advocate for open access to publicly-funded works, Swartz lamented that “the world’s entire scientific and cultural heritage, published over centuries in books and journals, is increasingly being digitized and locked up by a handful of private corporations”.

After downloading “protected” articles from the academic website JSTOR at the Massachusetts Institute of Technology (MIT), Swartz was indicted in 2011 by Federal prosecutors on 13 charges, including computer fraud and wire fraud. The United States Attorney Carmen M. Ortiz argued: “Stealing is stealing whether you use a computer command or a crowbar, and whether you take documents, data or dollars.” Swartz faced lengthy imprisonment, monetary fines, as well as forfeiture and restitution. Swartz took his own life in January this year.

The tragic case of Aaron Swartz has led to debate on the state of intellectual property law and information technology law – especially as he had campaigned against the Stop Online Piracy Act. In a powerful speech at Harvard Law School last week, Lawrence Lessig considered the case of Aaron Swartz, and highlighted the need for law reform in a number of areas:

Lessig applauded the bipartisan efforts by Democrat Representative Zoe Lofgren and Republican Representative Darrell Issa to reform the Computer Fraud and Abuse Act 1984 (US) with Aaron’s Law. He said there was need to reform copyright laws – such as the Sonny Bono Copyright Term Extension Act 1998 (US), as well as other absurd copyright legislation. Lessig also emphasised that there was a need to resist legislative efforts that sought to promote paywall protected gardens of educational and scientific content and restrict or restrain open access policies.

There has been also discussion of Aaron Swartz in the context of social disobedience. Citing the example of Thoreau, United States Senator Ron Wyden reflected on the case of Aaron Swartz, “Aaron was a hacker. He hacked to promote innovation through openness. Where Aaron saw injustice, he hacked for its remedy. Aaron Swartz hacked Washington. A poorly written law called him a criminal. Common sense and conscience knows better.”

There has been a Congressional investigation into the role of the prosecutors in the Aaron Swartz case. There has been much debate about the role of MIT in the controversy. The educational institution’s hard-won reputation for open teaching and open innovation has been somewhat tarnished by its involvement in the prosecution of Aaron Swartz. MIT has commissioned an independent investigation into the matter.

The case of Aaron Swartz is certainly not limited in its significance to the United States. There has been a parallel debate over copyright law and open access in Australia – taking place both in copyright disputes, and policy debates.

He commented: “Do not think for a moment that Aaron’s work on JSTOR was the random act of a lone hacker, some kind of crazy, spur-of-the-moment bulk download. “Sequestering knowledge behind pay walls — making scientific journals only available to a few kids fortunate enough to be at fancy universities and charging $20 an article for the remaining 99% of us — was a festering wound.”

“Aaron was part of an army of citizens that believes democracy only works when the citizenry are informed, when we know about our rights — and our obligations”.

Public Resource.org has sought to make public documents available online in the United States. In February 2012, the Electronic Frontier Foundation defended Public Resource.org against claims that an online post of a 1985 federal standard on air-duct leakage infringed copyright. Discussing the case, Intellectual Property Director Corynne McSherry said: “We’re asking the judge today to let Public Resource continue its important work in increasing the public’s access to the laws and regulations that govern us.”

Aaron’s Army has also been busy in Australia. In December last year, Public Resource.org posted the Australian National Construction Code, along with other public safety standards incorporated into law by nations around the world.

On 8 February, the Australian government responded, with a copyright letter. The Australian Building Codes Board responded that it was the owner of the copyright in the work, and had not provided permission for the work to be reproduced. The Board warned, “If you do not cease and desist from using our work, we may pursue action under the [Copyright] Act.”

The conflict questions the efficacy of copyright exceptions, particularly the adequacy of “fair dealing”. The altercation addresses the role of the Commonwealth government in making publicly-funded documents, data, and knowledge available in open accessible formats. Given the controversy over the Aaron Swartz case, it is surprising that the Commonwealth has entered into such a conflict over copyright law and public works.

Ludlam stressed: “In this tragic case we see an outdated copyright legal regime in the United States that has long ceased being fit for its purpose that is presently criminalising a whole generation of internet users…Certainly data, if it is being created by governments at taxpayers’ expense, should be in the public domain.”

The Australian Law Reform Commission should contemplate such matters in its inquiry into Copyright and the Digital Economy. The actions of Aaron’s Army raises important questions about copyright law, and access to education, science, knowledge, government information.

The dispute over Aaron Swartz and the Australian controversy over Public Resource has raised larger questions about standards in respect of international trade agreements.
The Trans-Pacific Partnership has been controversial. A leaked draft of the Intellectual Property Chapter has highlighted that an arsenal of intellectual property enforcement mechanisms are under negotiation. There has been much concern about the expansion of intellectual property rights and remedies – and the impact that they will have on access to knowledge, freedom of speech, and rule of law.

The economist and journalist Peter Martin observed: “The US is pushing for even more in negotiations under way over the Trans-Pacific Partnership trade agreement. We should say no.”

The case of Aaron Swartz should make us reconsider the inclusion of punitive intellectual property measures in both national laws, and international agreements, such as the Trans-Pacific Partnership.