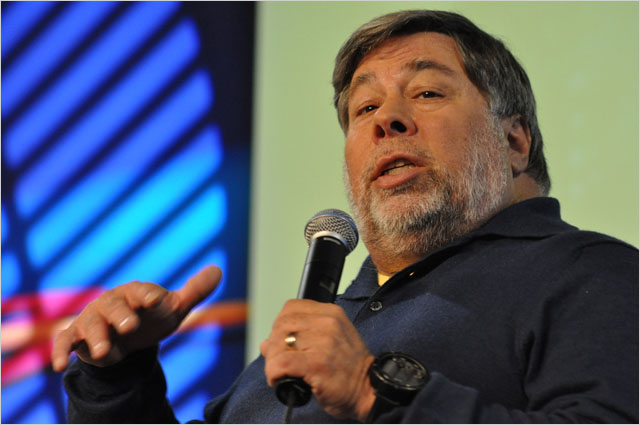 just trolling A number of media outlets have reported this week that Apple co-founder and global technology sector luminary Steve Wozniak is attempting to become an Australian citizen. But is this really a good idea? Here’s five reasons why we should stop the Woz at the border and send him packing back to his home country of the United States.

He believes the NBN is a good idea: Wozniak told the Australian Financial Review newspaper this week that he supported Labor’s National Broadband Network project and was one of the reasons why he wanted to become an Australian – because the US’s deregulation of its telecommunications industry had led to poor outcomes for consumers.

Well, given the Financial Review’s history criticising the NBN recently, this must have been like waving a red flag at a bull, and we bet if Woz should move to Australia, that the rest of Australia’s conservative mainstream media outlets would also jump on to slam the Apple founder on a daily basis. Despite the technical benefits universal fibre will bring to Australia – benefits obvious to a tech visionary like Woz – and its mass popularity, the project’s not in vogue with the Coalition and much of the media at the moment. Woz is clearly out of step with Australian society and shouldn’t be allowed in.

He’s jumping the queue: Woz has consistently demonstrated a commitment to lining up for things over the past few years. Every time his Alma Mater Apple releases a new product, Woz hits up the closest Apple store (for the iPhone 5 it was Chermside in Brisbane) to chat with the locals and wait for his turn to purchase an Apple gadget. But when it comes to Australia’s immigration queue, Woz appears to be trying to game the system.

Instead of quietly and calmly waiting for his turn on Australia’s immigration queue, Woz appears to be trying to jumpstart the process by hobnobbing with ministers, talking to the media about his plans to become a citizen, giving high-profile speeches locally and demonstrating his employability through his history with Apple and his current affiliation with fast-growing storage company Fusion IO. Clearly, Woz believes that he should be given “special treatment” and not have to wait in line to join our great nation like everyone else.

His family has ‘ethnic’ origins: Everyone in Australia came from ‘somewhere’ – or at least their parents or grandparents did — but we don’t want more people coming from ‘somewhere’ to Australia. In an era where “stop the boats” is one of the most popular political slogan around, one has to suspect that Woz’s possibly Polish/German ancestry wouldn’t go down well. I mean, we’ve already got plenty of Australians with ‘multicultural’ backgrounds. Do we need any more? Stop the boats!

He’s an evangelist for entrepreneurs: Woz currently spends much of his time travelling around the world speaking to technology enthusiasts, especially entrepreneurs running technology startups. His rationale for this approach appears to be that since he has been able to achieve wealth and happiness through co-founding Apple and working in other early stage technology companies, that others should be able to do the same. He hopes to inspire young people to follow his path.

It’s hard to see what greater risk there could be to Australia’s national productivity and industry than people leaving highly paid positions in the mining and tourism sectors to start small technology companies to succeed and be happy. Australia’s future is clearly tied to the resources sector, and everything we do should be aligned to that aim. For those people who don’t want to work in Western Australia on a mine, there are a few acceptable alternatives, such as working in the tourism sector, or for one of the large duopolies. You know the ones I’m talking about – Woolworths and Coles, Telstra and Optus and so on. Working for one of the large four banks or the Government would also be acceptable. Just as long as it’s a major organisation where you can be unhappy alongside everyone else.

He doesn’t follow sport: According to Wikipedia, one of Woz’s main hobbies throughout the 1990’s was getting the highest possible scores on Tetris and submitting them to Nintendo Power magazine. He also travels with a huge accouterment of gadgets and loves to tinker with technology in his spare time. There is just no way that this kind of geek would be into going to the rugby or AFL on the weekend – and he’s American, so doubtless Woz has no idea what cricket even is.

Someone who doesn’t follow sport just has no basis to try and become an Australian citizen – clearly they are out of step with Australia’s national character. Woz’s geeky obsessions just wouldn’t fit in in a society which appears to believe that the pinnacle of national success is to be captain of the Wallabies or the national cricket side. This alone is a good reason to keep Woz out. And no, Segway Polo does not count as a sport.

Do I need to go further? Woz is a geek with ‘ethnic’ origins who doesn’t show any interest in sport, he will draw attention away from Australia’s mining industry, and is in favour of that great “white elephant”, the National Broadband Network. And to boot, he’s just another “illegal” attempting to jump the queue to get into Australia. Clearly, Woz’s application should be marked “rejected”, and he should be shipped offshore to Nauru for processing like everyone else trying to get into Australia illegitimately. Enough said.

If you haven’t realised by now, this article was tongue in cheek ;) Image credit: campuspartycolombia, Creative Commons