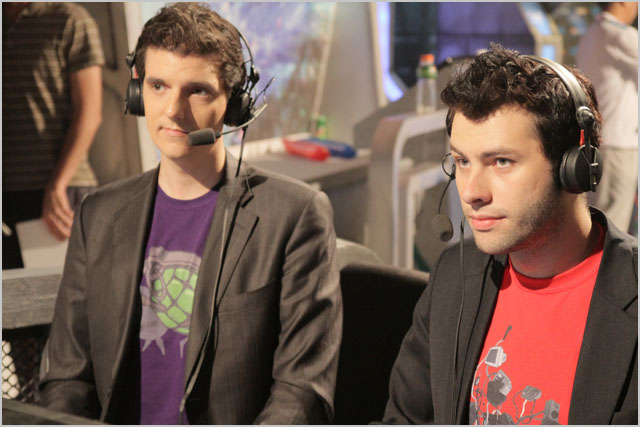 news Australia is shortly to play host to two of the biggest celebrities in the global StarCraft II competitive gaming scene, with commentators Tasteless and Artosis to arrive in Sydney in mid-August to host one of the nation’s largest and lucrative tournaments in the local history of electronic sports.

The pair — Nick ‘Tastless’ Plott and Dan ‘Artosis’ Stemkoski — are in their late twenties but already have a decade of experience each in the global competitive video gaming scene, especially centred on the StarCraft real-time strategy game developed by Blizzard in the late 1990’s and rejuvenated with the mid-2010 launch of StarCraft II: Wings of Liberty.

Players themselves in the past, the duo — known collectively as ‘Tastosis’ — are currently two of the main English-speaking commentators hosting the most competitive StarCraft II tournament internationally in South Korea. The tournament, known as the Global StarCraft II League, plays host to many of the most skilled StarCraft II players in the world, with champion prize packages ranging up to AU$50,000 and smaller prizes for different levels of progression in the tournament. However, they also regularly travel to host international tournaments.

In South Korea, StarCraft is considered more a national sport than the humble video game that most Australians see it as. And it’s not hard to see why.

Since the original StarCraft was first released by Blizzard Entertainment in 1998, national competitions in the Asian country based around the game have gradually accumulated all the trappings of major sporting competitions like the National Rugby League or the Australian Football League. Hundreds of thousands of dollars in prizes are up for grabs, as well as millions in sponsorships, and the matches are broadcast nationally on live television.

Traditionally, the Korean StarCraft scene has been dominated by dedicated teams of professionally trained Koreans. However, the release of the second major version of the game — StarCraft II: Wings of Liberty — in mid-2010 has seen an influx of foreigners into the GSL, although few have made it deep into the competition. The past several years have also seen the creation of similar major StarCraft II tournaments in Europe and the United States, which top-level Korean players also regularly compete in. The best US and European players are also regularly seeded into the GSL to keep that tournament at a fever pitch of skill.

Tasteless and Artosis will be in Australia for the weekend of 11 and 12 August, to host the local leg of Blizzard’s World Championship Series (WCS), in partnership with local organisation the Australian Cyber League (ACL). The top 18 players from Australia & New Zealand will, according to the ACL, compete in two back to back events, the Australia Nationals and Oceania finals, with a combined prize pool of US$25,000. The top two players following the weekend will attend the World Finals in China later this year. Tickets to the events, which were free, have already been booked out.

Also helping to host the event will be Alex Do (‘HDstarcraft’), another commentator based in the US who has attracted a significant international following, especially due to his YouTube channel, since StarCraft II was released, and a player and commentator who often commentates with HDstarcraft, Taylor Parsons (‘PainUser’).

Preliminary qualification rounds for the Australian leg of the contest have already been held, with the top 16 players advancing through to the Australian national finals. Following that competition on 10 and 11 August, the top six Australian finals will play New Zealand’s best in the Oceania finals on 12 August to compete for the title of best player in the two regions.

Most of the Australians who will compete in the tournament are young, typically around 20 years of age or below, and relatively unknown on the international StarCraft scene. However there are several veteran players who have a higher profile.

Andrew Pender (‘mOOnGLaDe’), for example, travelled to Korea in early 2011 to compete in the GSL, and has previously won top spot on the South East Asian StarCraft II server, which Australia shares with other countries such as Singapore. He has also won a number of local tournaments since, including the TransTasman StarCraft II Championship and the Australian StarCraft II Showcase, which aimed to demonstrate the top Australian talent at the game.

Queensland-based Pender was quickly knocked out of the GSL, but is seen as one of the stronger local players. In addition, fellow Queenslander Peter Neate (‘Legionnaire’) was well known for his skill in the original StarCraft and is now one of the top local players in StarCraft II. Neate will also compete in the local Australian finals.

In Australia, WCS will be held with much of the glitz and glamour associated with international tournaments such as the GSL in South Korea and MLG in the United States — complete with a party atmosphere, live commentating on broadcast matches and a sizable audience of hundreds of local StarCraft II fans — with the major difference being the smaller size of the Australian event, and the less well-known local players competing.

opinion/analysis
The arrival of Tastosis, HDstarcraft and PainUser for the WCS tournament in Australia marks a major event for the Australian competitive gaming scene, which has been growing rapidly in size and intensity over the past several years, mimicking the huge international growth being experienced by the e-sports scene globally.

In the StarCraft community, Tasteless and Artosis in particular are substantial celebrities, and I expect them to be virtually mobbed by Australian GSL fans requesting their autograph and photos with them. To have such sophisticated commentary for an Australian StarCraft II event will lend the occasion a huge aura of credibility and quality that previous local events have at times struggled to achieve, and will deliver a huge boost to the local e-sports scene generally.

I can only hope that our local players deliver sufficiently high-level play to impress them; hopefully with some local innovation and style that can be taken back to Korea and digested and perhaps, if it’s good enough, take its place in the ongoing meta-game of current StarCraft tactics and strategies. It would especially be fascinating to find out Artosis’ thoughts on the Australian StarCraft II scene following WCS, given how analytical his commentary is.

Knowing Artosis and Tasteless as I do, given how many hundreds (perhaps thousands?) of hours I’ve logged listening to their pair commentate broadcast matches from Korea and elsewhere, I suspect both will take away different experiences from their local visit. Artosis will no doubt enjoy the local tourist spots — I doubt he’ll leave Sydney without a glimpse at the Opera House and Harbour Bridge at least — while I wouldn’t be surprised to bump into Tasteless out late partying on the Saturday night following the first WCS and getting stuck into the “monkey milk”; perhaps with HDstarcraft, who occasionally seems like a bit of a party animal as well.

Either way, it will be great to have these top-level commentators in Australia, however briefly, and I’ll be attending WCS to catch all the action live that weekend. Check out the Blizzard-produced video below to get a quick taste of what the event will be like.