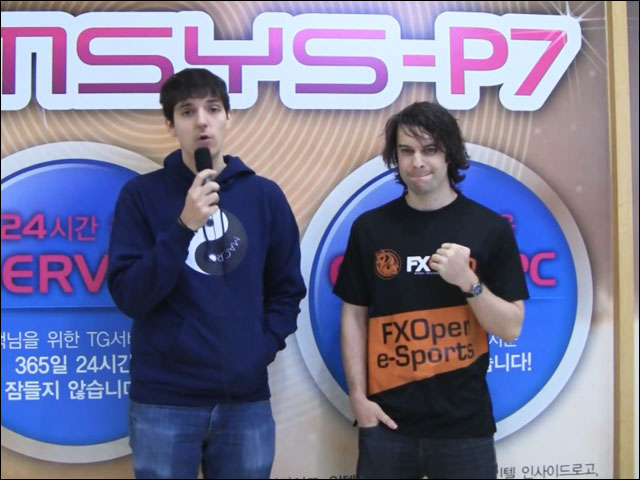 In South Korea, StarCraft is considered more a national sport than the humble video game that most Australians see it as. And it’s not hard to see why.

Since the original StarCraft was first released by Blizzard Entertainment in 1998, national competitions in the Asian country based around the game have gradually accumulated all the trappings of major sporting competitions like the National Rugby League or the Australian Football League. Hundreds of thousands of dollars in prizes are up for grabs, as well as millions in sponsorships, and the matches are broadcast nationally on live television.

Traditionally, the Korean StarCraft scene has been dominated by dedicated teams of professionally trained Koreans. However, the release of the second major version of the game — StarCraft II: Wings of Liberty — in mid-2010 has seen an influx of foreigners into the country’s first major StarCraft II competition, the Global StarCraft II League or GSL, for the first time.

And several weeks ago, it was announced that Brisbane gamer Andrew Pender (pictured, above right) would be one of them.

“In the upcoming weeks, Mr Andrew Pender will be practicing his life out in order to show the world what Aussies are made of, in Korea,” the Australia-based FXOpen professional e-Sports team, which is backing Pender, wrote on the forums of popular English language StarCraft site TeamLiquid in mid-January.

Pender — known online by his playing name, mOOnGLaDe — has already achieved a great deal of recognition in the StarCraft scene over the past year, since the game was first released in beta form.

The professional gamer won the top spot on the South-East Asian StarCraft II server — which Australia shares with other countries such as Singapore — early in 2010 and has won a number of local tournaments since, including the TransTasman StarCraft II Championship and the Australian StarCraft II Showcase, which aimed to demonstrate the top Australian talent at the game.

In Korea, Pender will compete in the second-tier, or “Code A” tournament organised and broadcast by electronic sports organisation GOMtv, which operates the GSL. The main aim of those competing in Code A is to progress high enough in the tournament to be judged worthy of entering the top-tier “Code S” competition, which offers a much higher profile, prize money and national notoriety as a StarCraft II contender. The tournament has a total prize pool of US$170,000.

In an interview with American GSL commentator Dan Stemkoski (“Artosis”) posted online from Korea last week (see below), Pender said he liked the country so far, noting that it was cold compared with Australia, and prices cheap.

Primarily, since he arrived, he said, he had been practising for the upcoming GSL competition in several weeks’ — competing on the elite Korean server in order to improve his game. Pender is living in what is termed a training house; a communal abode where, like athletes, professional StarCraft players live together and focus on the game with the aim of bringing their skills to the level required to compete in the Korean leagues.

One factor which Pender noted had been influential since he arrived in-country was the lack of latency associated with playing the game online. Poor latency — or “lag” — is a problem which affects Australians in the game, due to this country’s geographical remoteness from the locations where StarCraft II servers are hosted. Blizzard has so far refused to construct an Australian server for the game, preferring instead a Singapore location for its infrastructure.

“Let’s face it, Australians lag. How do you like it?” Stemkoski asked Pender in the interview. “It must be kind of a new experience for you.” Pender replied that the lack of lag in Korea was “amazing”. “It’s deifnitely improved my game a lot,” he said, noting it was “just so fun” to maneuver the game’s sensitive Zergling unit. “It’s a massive difference,” he said.

On paper, Pender’s chances of winning a major tournament in Korea are slim; with the intensity and focus of the Korean training proving hard over the years for Westerners to match. However, a number of foreigners have paved the way over the past few months for the entrance of international players like Pender into the GSL competition.

Only time will tell how far Australia’s best — Pender — will be able to make it in the tournament, after being given an honorary Code A ticket due to his skill and foreigner status. “I’m going to practice my heart out for the next 20 days or so,” he told Stankoski. “I think I’ll improve a lot and be ready for it.”