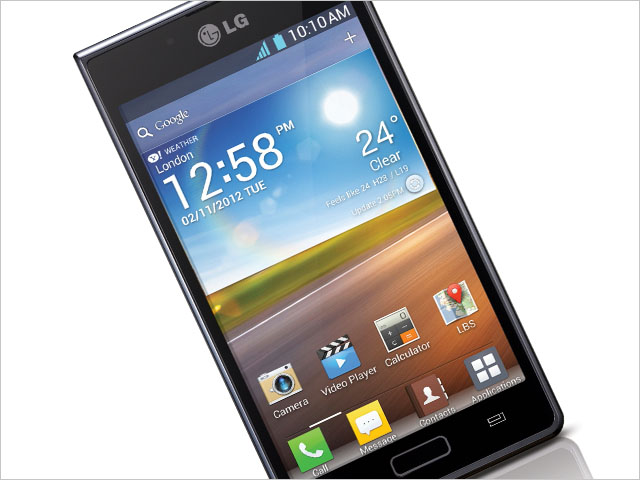 There are four models in the range — the Optimus L7, L5, L3 and L2. The L7 is the top-end model, with a 4.3″ screen, a 1GHz processor, a microSD card slot and running the next to latest version of Google’s Android operating system — Ice Cream Sandwich.

However, without 4G speeds, with only a five megapixel camera that can shoot only VGA-level video, and with a resolution of 480×800 pixels, the L7’s specifications place it behind other high-end Android smartphones currently available in the Australian market, such as HTC’s One series and Samsung’s Galaxy S III handset.

The L5 also runs Ice Cream Sandwich, but it features a slower processor at 800Mhz, and also comes with a five megapixel camera. Its other specifications place it in the mid-range of smartphones, with a 4″ screen that runs at a resolution of 320×480 pixels. The L5 also features a 800MHz processor, but has a smaller screen at 3.2″, and runs the prior version 2.3 of Android (‘Gingerbread’), which is now several releases out of date with the most modern version of Android, Jelly Bean.

The Optimus L2 also features an 800Mhz CPU, but has a lesser camera at 3.2 megapixels. It features the ability to use two SIM cards simultaneously (“dual SIM”), and also comes with Gingerbread as its operating system.

“L-Style provides consumers with a new range of smartphones that are not only easy to use, but are also visually appealing, packed with all the necessary features for users to get a first-class experience from their smartphone every day.” said Ben Glimmerveen, Head of LG’s Mobile Communication, in a statement distributed by LG this week.

The concept of LG’s L-Style design philosophy is to differentiate its smartphones in the market, Glimmerveen continued. “Through our experience, we believe that design and visual appeal still top the list of factors that are most important to people when purchasing a mobile.”

opinion/analysis
It looks to me as though LG is going for style and marketing clout over substance with this latest range of handsets. Compared with the handsets available from other manufacturers, LG’s L-Style range looks extremely underpowered and not even up to date software-wise. The company has paid former Miss Australia winner Erin McNaught to be the face of its new advertisements with the L-Style series and appears to be going all out with a series of national television commercials.

However, to my eye, the L-Style range doesn’t actually look stylish enough for consumers to be able to get past the range’s mediocre specifications. To be honest, to a cursory glance, the models look like some of the most generic Android smartphones we’ve ever seen. I’m not quite sure what would incentivise Australians to buy them.

I’ve asked LG for review units, and it’s important to note that lower to middle-range Android smartphones have impressed us before when we’ve actually tested them, despite featuring only middling specifications on paper. Much rides on the overall build quality of the models, which is not something you can tell from a press release or publicity photos.

But until we do get the chance to review the new L-Style series from LG, I would recommend a cautious approach to them. You don’t want to buy a phone now which has specifications which will be out of date in six months to a year — if they’re not already.