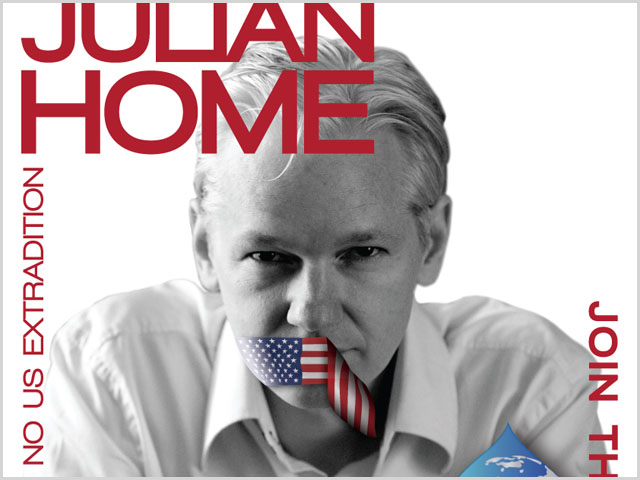 news A series of protests will be held around the nation this afternoon to demand the Federal Government protect Wikileaks founder Julian Assange from potential extradition to the United States, despite statements by Foreign Minister Bob Carr to the effect that the Australian Government has done his utmost for the Australian citizen.

Overnight in the UK, the country’s Supreme Court ruled that Assange could be extradited to Sweden to face accusations of sex offences. Assange’s supporters have regularly highlighted the danger of the Wikileaks founder being extradited from Sweden to the United States, where the leaked emails from US private intelligence firm Stratfor have suggested a grand jury has already been drawn up to indict Assange over his Wikileaks activities. Assange has two weeks to appeal the UK case.

Flagging the protests around Australia this afternoon in a statement, Greens Senator and Communications Spokesperson Scott Ludlam, who has been a long-term supporter of Assange, said the Government had a duty to protect the human rights of all Australian citizens, and to provide them with legal and consular assistance.

“The Government has done almost nothing to protect Mr Assange’s rights, have delayed and frustrated attempts to discover the truth surrounding the US campaign against him, and must enable his safe return home,” said Ludlam.”

“Wikileaks is being punished through legal attacks and a financial blockade by Visa, MasterCard, PayPal and others for doing nothing more than what good journalists and publishers do: revealing the truth no matter how embarrassing to governments and powerful corporations. In Australia we have seen bipartisan political indifference on behalf of the old parties, indifference which on closer examination is outright hostility towards WikiLeaks.”

“Yesterday’s verdict in the UK Supreme Court provides for another fortnight of legal limbo. It is another two weeks in which the important work of this publishing organisation remains almost paralysed. Whatever the outcome of the appeals over the next fortnight, Mr Assange is not out of danger until the threat of extradition to the United States is entirely removed.” The Australian protests will be held in capital cities, as well as other cities such as Townsville, Newcastle, the Gold Coast and Sunshine Coast, Rockhampton and Townsville.

However, the Government has regularly stated that it has done its best by Assange.

The Government’s hands were currently tied when it came to Assange’s fate, Federal Attorney-General Nicola Roxon said in mid-April, with the maverick Internet publisher’s Australian citizenship mattering little in the scheme of Swedish legal process unless a formal extradition request was made to shift him out of the European Union. According to Roxon, if an extradition request was filed to shift Assange to the US, Australia would be notified and have the opportunity to challenge the issue. However, the Attorney-General said she would not pre-make a decision on what the Government would do in that case, as the issue would include a variety of factors such as what the request was about, what penalties might apply and so on.

However, one of Assange’s lawyers, Australia-born human rights lawyer Geoffrey Robertson said at the time that if Assange was taken to Sweden, the Australian Government could intervene at that point from having the activist extradited to the US, echoing comments by the Greens, which has demanded that the Government intervene in Assange’s case.

Today, in a press conference, Foreign Minister Bob Carr reportedly said no Australian had been given more consular support in a comparable period than Assange, and that he was monitoring the case closely. Carr added that there was no indication that the US was looking to indict Assange.

However, Ludlam for one isn’t happy with the Government’s answers on the matter. “Today in Senate Estimates I asked Foreign Affairs Minister Bob Carr and his department if the Australian Government had sought advice on whether the US Government is seeking to extradite Julian Assange,” Ludlam said earlier this week. “I was repeatedly told that the Australian government “was not aware of any evidence” of a sealed indictment on Assange.”

“This is fairly simple code for ‘nothing has officially been put in writing’. Through the use of highly selective and awkward language, the Government is attempting plausible deniability instead of going into bat for an Australian citizen in trouble. This is a matter that the whole world is watching.”

Additionally, Assange’s mother, Christine Assange, has reportedly also been active on the issue, stating in an interview on the ABC’s Radio Australia network in mid-April that significant breaches of the Swedish legal system had already taken place.

“… the fact is that Sweden has breached all its own laws on this case from day one and the Australian Government has said nothing. Flagrant abuses, abuses not only of police and prosecutorial procedure, but human rights as well,” Christine Assange said, adding that Attorney-General Nicola Roxon had been presented with a list of those breaches. 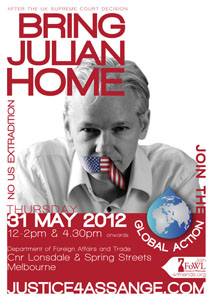 Referring to statements made by Roxon, Christine Assange added: ” … she’s actually stated here that she didn’t know if it’s easier or not to be extradited from Sweden. She full well knows it’s easier, because Scott Ludlam took it to the Senate a number of months ago asking at the very least that what the Australian Government should do is protect him from that Temporary Surrender Regime which has absolutely no public process on it, okay? It’s a tick-box.”

Other minor Australian political parties such as the Pirate Party of Australia have also been actively commenting on the issue.

“The Australian Government’s continued and willful ignorance of US intentions to extradite Mr. Assange, an Australian citizen, possibly on the grounds of espionage and conspiracy, is completely unacceptable. The government must be more active in seeking to ensure the safety of Mr. Assange,” said Simon Frew, Deputy President of Pirate Party Australia, in a statement issued today. “Our continued alliance with the United States should not be at the expense of the rights of Australian citizens.”

“There are a number of concerning issues with the legal process,” Frew added. “The Supreme Court used the Vienna Convention on the Law of Treaties, a document regarding the interpretation and operation of treaties between states, as a basis in their determination. This had not been raised by either side during the proceedings of the appeal. Legal analysis seems to indicate this may give Mr. Assange and his team opportunity to re-open the case. In Sweden the case had been dropped by one prosecutor and picked up by another. The Swedish legal system requires sexual assault cases be held in private, where we expect the right to scrutinise any legal process to see that justice is actually done. Consequently Mr Assange will be held incommunicado and tried in secret once he arrives there.”

“We have to do what we can to support Julian, and organisations like Wikileaks, so we urge everyone who feels the same way to come out to protests around Australia and the world. It is important that we reiterate to our government that whistleblowers and conduit publishing organisations like Wikileaks are essential to the function of any modern democracy and that stronger protections for both are necessary,” he concluded.

opinion/analysis
To be honest, I’m not sure what to make of this whole process at the moment. Is Julian Assange an innocent victim of political manipulation, with dodgy goings on in Sweden dragging him into a compromised legal process and the giant shadow of the United State’s eagle wings looming over him, waiting to swoop in and snatch him up in barbed claws? Or is this legal process proceeding in a perfectly normal manner, bringing to justice an individual who has actually committed illegal acts? I’m not sure, but I think the truth is somewhere in the middle.

The one thing I am sure of is that this saga is not going to end any time soon, and that the whole process is likely only furthering Assange’s overall aims. There could not be more publicity on this case right now, and that is something I am sure Assange is very happy about. That, in itself, makes me question his motives. I do not think the Wikileaks founder is as clean sparkly white an individual as Robertson, in particular, makes him out to be. Having said that, that’s not necessarily a bad thing — our society needs all kinds of people to make it work, including rabblerousers.