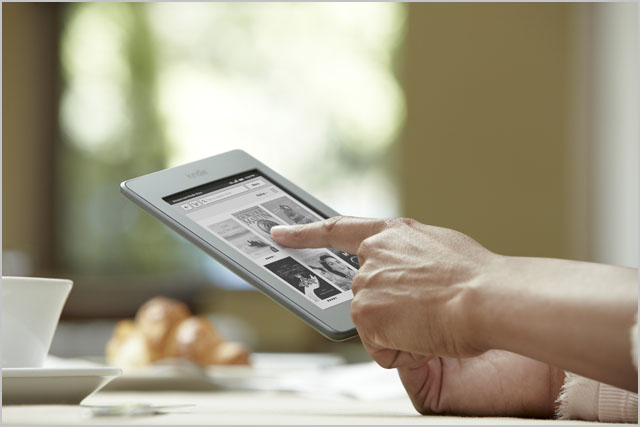 The announcement was made in a press release from Amazon which also highlighted the features of this new e-reader.

The Kindle Touch 3G is ready to use right out of the box without the hassle of a setup or software installation. As a top of the line e-reader, Kindle Touch 3G offers the same design and features as those of Kindle Touch with the added convenience of free 3G access to download books. Since 3G works globally, the inbuilt Wi-Fi in the latest Kindle guarantees connection to Wi-Fi hotspots anywhere in the world. Wireless delivery ensures book downloads in 60 seconds eliminating the need for a computer and in addition, free cloud storage is offered for all Amazon content downloaded.

Amazon claims that Kindle Touch 3G can hold 3,000 books backed by a two-month battery life. Customers have access to over 1 million books in the Kindle Store, including international bestsellers, newspapers and magazines. A touchscreen is used to turn pages, search, shop, and take notes. Kindle books can be read on the iPhone, iPad, iPod touch, PC, Mac and Android-based devices apart from the Kindle itself. According to Amazon, there are no annual contracts or monthly fees to be paid on purchase of Kindle Touch 3G.

With the new X-Ray feature in the Kindle Touch 3G, readers can explore the “bones of a book” with a single tap – this refers to all the passages in a book that mention ideas, fictional characters, historical figures, places or topics of interest, as well as detailed descriptions from Wikipedia and Shelfari.

The other feature is the new EasyReach that makes it possible to turn pages, again with a tap – so the Kindle can be held in either hand. A comfortable read is ensured through eight different sizes and three font styles. It is also possible to e-mail personal documents and PDFs direct to the Kindle and read them on-the-go. Kindle Touch 3G is available in multiple languages – German, French, Italian, Spanish, Brazilian Portuguese and American and British English. It comes with built-in speakers offering support for text-to-speech (Kindle can read English-language content out loud), audio books and mp3 support.

Last year when Amazon announced a new range of Kindle devices, they were mostly available to US residents only. At that time, the only product which was available outside the US was the entry-level Kindle.

Dave Limp, vice president, Amazon Kindle, while talking about Kindle Touch 3G said: “Customers love the electronic ink display that reads like paper, with no glare, even in bright daylight, the unparalleled convenience of 3G for downloading books in less than 60 seconds, and with our new touch technology and a unique combination of features you won’t find anywhere else – Text-to-Speech and our new technologies EasyReach and X-ray – we’ve made it easier than ever to read and explore Kindle with one hand.”

The Amazon website shows a pre-order price of $189.00 for the Kindle Touch 3G.