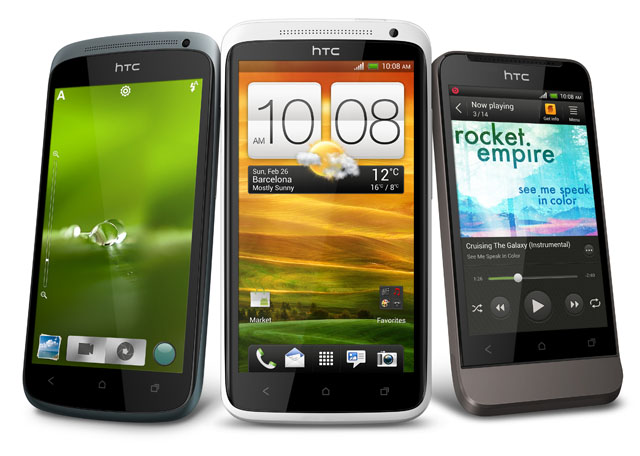 news Taiwanese gadget giant HTC has confirmed that it will shortly be launching its new top-end One line-up of Android-based smartphones revealed at Mobile World Congress in Australia, and will reportedly also launch a 4G version of its Titan II Windows Phone 7 handset locally as well.

At the Mobile World Congress in Barcelona, the company overnight launched a series of new handsets that it’s dubbing its ‘One’ family. All of the handsets run the new Ice Cream Sandwich (version 4.0) edition of Google’s Android operating system, and offer advanced features over the company’s current line of HTC Sensation and Desire handsets currently available in Australia.

The screen of the One X is a 4.7″ touchscreen running at a high definition resolution of 720p and using Corning’s Gorilla Glass material. In countries with 4G (using the Long-Term Evolution standard or LTE), it will also launch in a model supporting LTE and with a dual-core Qualcomm Snapdragon CPU at 1.5GHz, to be known as the One XL.

The Verge and PC World Australia have reported that the HTC One XL will launch in Australia through Telstra. This makes sense, because Telstra is currently the only Australian mobile carrier to have launched 4G services in Australia. Currently the telco only sells one handset supporting 4G speeds — the HTC Velocity 4G, which offers customers dramatically enhanced network speeds in Telstra’s 4G supported zones, compared with the rest of its network. Optus has linked to the One X announcement through its Facebook page, hinting that it will launch the handset when it eventually arrives in Australia. This would also make sense, as Optus does not currently support 4G services.

The HTC One S also announced overnight is a similarly high-powered smartphone, with a 1.5GHz dual-core CPU, a 4.3″ screen and a thin unibody case. The case is only 7.9mm thick, which HTC says makes the One S its thinnest phone yet. The One S boasts a qHD (960×450) display resolution. It is unclear whether the phone will launch in Australia.

It’s not clear which of the phones will launch through Australia’s third major carrier, Vodafone, although HTC did list Vodafone Australia on its supported carriers page in the Asia-Pacific region for the new handset launches. In addition, it’s not yet clear when the handsets will launch in Australia, although globally, a number of other carriers are citing April as a target time frame for launches of the handsets. “Stay tuned for local announcements!” HTC Australia’s Facebook page stated today.

In addition, it appears as if HTC is not only planning to launch new handsets in Australia based on the Android operating system. Windows Phone Down Under has quoted international site Pocket-lint as having confirmed an Australian launch (likely through Telstra) of the HTC Titan II at some stage this year, directly from HTC. The Titan II is likely to launch through Telstra as the phone supports the LTE standard.

opinion/analysis
Awesome! Absolutely awesome! These are some of the best smartphones I’ve ever seen, both in terms of pure specifications and in terms of design and they’re launching in Australia just as the major carriers are starting to upgrade their networks to LTE. It will be fantastic to see how users take them up locally. I’m predicting, given the strong and continued migration to Telstra’s network, that the HTC One XL will be one of the top smartphones of 2012 in Australia. And it may even be the top model. I’m sure Samsung will have a bit to say about that, however, given time as will Apple ;)

In short, Australia is currently about to experience a bounty of riches when it comes to smartphones, and of course pricing also continued to be solid every year. It’s good times ahead.