Telstra chief executive David Thodey appears to be taking a dramatically different approach to remunerating its top executives compared to his predecessor Sol Trujillo, with new executives coming on board over the past several years attracting pay packets millions of dollars less than those they are replacing.

Trujillo, who governed Telstra from mid-2005 through 2009, attracted a great deal of criticism from shareholders and the wider community for the high level of remuneration which he personally attracted from Telstra, as well as the pay packets earned by a number of executives he brought with him to the company, commonly known as ‘the Amigos’ due to Trujillo’s Mexican descent and their often US origin.

Trujillo himself, for example, was paid amounts ranging up to $13.4 million each year over his tenure, although the executive was already independently wealthy due to his long history leading telecommunications companies overseas. One of his chief lieutenants, then-Telstra chief operations officer Greg Winn, earnt about $21 million over three years leading Telstra’s technical operations.

The pushback against high Telstra salaries peaked in November 2007, when two thirds of the telco’s shareholders, including major shareholder the Future Fund, voted against Telstra’s remuneration report at its annual general meeting. The telco’s board isn’t obliged to act according to shareholder voting on the matter, but commentators saw the action at the time as a significant warning to Telstra’s board that it wasn’t happy with the company’s management.

However, analysis of executive remuneration stemming from Telstra’s release today of its annual report for the past financial year reveals top Telstra executives today attract salaries dramatically less than they did under Trujillo — especially those hired by Thodey over the past several years.

New top executives to have joined Telstra’s ranks over the past several years at the level of group managing director have generally lesser overall remuneration than their predecessors. For example, the company’s new chief operations officer Brenton Riley pulled in $1.7 million over the past year, compared to Winn’s salary approximately three times that level.

Telstra’s group managing director of Customer Sales & Service, Gordon Ballantyne, only earned $2.8 million over the past year, compared with Trujillo-era consumer chief David Moffatt, who was usually paid up to a million dollars more each year.

Thodey himself appears to have attempted to signal to Telstra staff that he would take a more humble approach to his own salary. In September 2010, for example, the executive announced that some 6,000 staff in Telstra’s Consumer and Country Wide unit would have to take a pay freeze. At the time, however, he also noted that he would personally take a pay freeze alongside them — and the company’s top 300 executives would suffer the same. 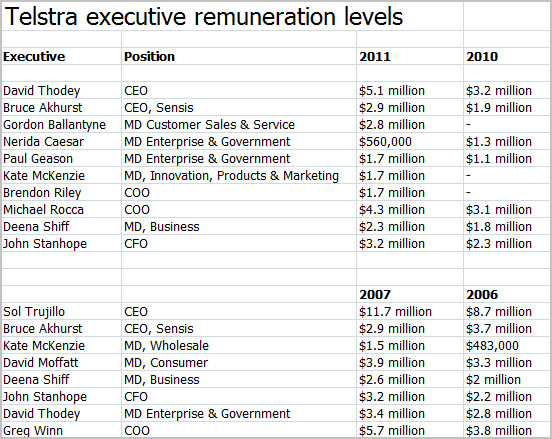