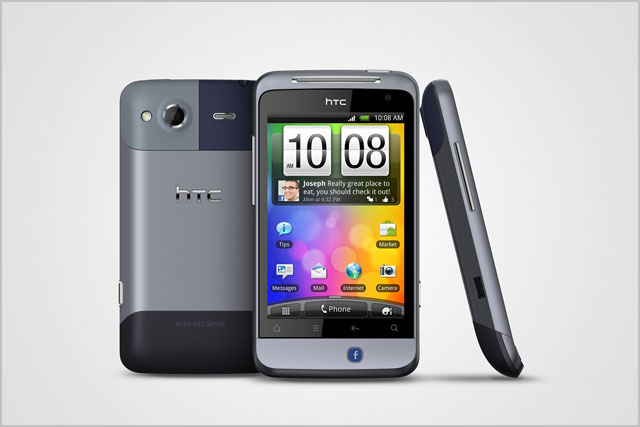 review Last month, HTC launched the Salsa in Australia with Vodafone. It was launched side-by-side with the ChaCha, and both are HTC’s first “Facebook phones” featuring a dedicated post to Facebook button. But how does the Salsa’s handle in practice? Read on to find out.

The HTC Salsa is available in Australia exclusively through Vodafone.

Design
The first thing that strikes you when you look at the Salsa is just how elegant it is. Although Android phones aren’t particularly renowned for being particularly stunning (although they are improving) HTC has de-cluttered the Salsa as much as possible, and the frame of the purple-grey tinted device (there’s also now a black model) looks stunning.

It’s evident HTC worked hard on ensuring the Salsa is as comfortable in your hand as possible. The sleek backing means it feels good to hold, and the phones edges are smoothly rounded ensuring it moulds into your grip.

The screen takes up most of the real estate on the front of the Salsa, stretching almost entirely from one side to the other with just a few millimetres of black panelling on the edge. At the bottom of the front of the device is the stock-standard row of Android touch-sensitive buttons, including home, menu, return and search. At the top behind the mesh-covered speaker is an LED notification light, which handily flashes when an Android notification (i.e. new mail, SMS or missed call) arrives, while on the right-hand side there’s a physical button to take an image or record video.

And of course how could one forget the physical Facebook button — the major feature of the device. It’s situated below the Android buttons on the front of the device, and is raised ever so slightly. The Facebook icon is easily recognisable, and doesn’t look too out of place on the otherwise button-free device front.

If you were to nit-pick, then some would say the thickness of the device could be an issue — it’s a tad thicker (just over 2mm) than Apple’s iPhone 4 for instance. We found the one long volume button at times to be also problematic, turning the volume up when we wanted it to go down, and vice versa.

Hardware & Perfomance
In terms of hardware and performance, the Salsa is nothing amazing but it manages to perform most major functions alright. It comes with a respectable 800 MHz processor, as well as 512MB of RAM and 512MB of inbuilt storage.

When using the Salsa, some lag-time is noticeable when a number of Android animations are being performed, and interestingly even the lock screen at times had a noticeable delay between the unlock action occurring and the phone’s homescreen displaying. That said the Salsa passed our Angry Birds test in style, with the Android edition of the hit game performing smoothly on the device.

Battery life was reasonable when compared to other Android phones, lasting around a day of on-off usage which included web browsing, playing games and making and receiving phone calls. HTC says the Salsa lasts up to 585 minutes talk-time.

Features
The Salsa is obviously based around Facebook. What’s Facebook based around? Sharing of information, including pictures and videos. It’s fitting therefore, that the Salsa has both front and rear-facing 5MP cameras which allow users to take images and instantly share them with Facebook friends.

Unfortunately quality of the images wasn’t outstanding — they looked a little blurry depending on the light, and weren’t as sharp as we’d like, but as a matter of convenience uploading the pictures couldn’t be easier. Hit the Facebook button, tap the camera or gallery icon, choose an image and you’re away. One rather limiting (and annoying) factor here is that you can’t upload video directly — HTC only allows for photos, not video, so you’ll need to use a third-party app to do so.

As mentioned before, the Salsa also has a dedicated Facebook button that, when pressed, loads a post screen allowing you to post status updates and photos to either your wall or a friends (there’s a search function that lets you find what friends page to post to).

Not only that, Facebook is implemented everywhere you look — whether it be contacts or messages, your Facebook friends are always able to be searched. The Facebook app ships on the phone, as do two HTC Facebook-based apps, one for the friend stream showing updates, check-ins, photo and video uploads, lists, links and notifications and the other a dedicated Facebook chat app.

The Salsa also boasts HTC’s love-it-or-hate-it Sense overlay for Android, that adds additional capabilities to the OS but also adds, for some, unwanted software bloat. We’re not going to go into all the details of Sense, suffice to say that it’s there, and that the Salsa ships with the latest version, 2.1.

Final Word
If you’re a Facebook addict, you’ll love the Salsa — you couldn’t ask for much more Facebook integration from an Android handset. That said, it’s not the first Facebook-dedicated phone to arrive on the market, with the INQ Cloud Touch having been available from Vodafone Australia for some time now.

For those not so keen on Facebook, the Salsa is still a competitive Android handset which looks good, performs OK and isn’t overpriced. The Facebook integration is nice, screen’s OK and front and rear-facing cameras mean it should be future proofed for any video chatting capabilities Google decides to add down the track. You’ll also be restricted to Vodafone’s network for now — they’ve got exclusivity over the device — so for some that’s a good thing and others could be a make or break factor.

The HTC Salsa is available in Australia exclusively through Vodafone.