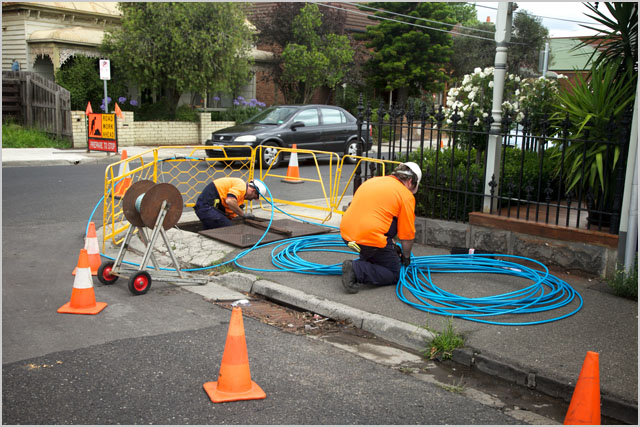 NBN Co today held an event to launch the Brunswick site, which is the first to be switched on outside of New South Wales where the first two mainland trial sites were connected in Armidale and last week in the Kiama Downs and Minnamurra area. Works started in the area in October 2010, with Telstra, NBN Co and the Moreland City Council working closely together to ensure the project ran as smoothly as possible and reduce the disruptions to local residents.

Approximately 2,689 Brunswick premises are in the fibre footprint of the trial site. Around 52 percent of residents took up NBN Co’s offer to connect them for free to the high-speed NBN, although many won’t be able to use the NBN until October, when the trial period ends.

“The launch today of the NBN in Brunswick and new construction activity we’ve announced are the latest steps towards delivery of a crucial piece of nation-building infrastructure,” NBN Co Chairman, Harrison Young said in a statement. “The National Broadband Network has the potential to deliver genuine competition in telecommunications and benefit Australian homes, businesses, schools and hospitals for decades to come.”

Some lucky residents in the area will have the opportunity to begin using the NBN in the coming days and weeks as part of a number of trials being conducted on the network before it opens up to everyone in early October.

Out of the five initial mainland trial sites, just two remain to be switched on, with one situated in the suburbs of Aitkenvale and Mundingburra in Townsville, Queensland and the other in Willunga, South Australia. According to a NBN Co spokesperson, work at both remaining sites is “progressing well.” “We will have local events in these areas marking the official launch of services,” the spokesperson said.

As the trial sites near completion, attention will soon turn to the second release sites, which expand upon the first release sites and are due to start before the end of this month. NBN Co also yesterday revealed works will soon get underway in five locations across mainland Australia, building its 4G fixed wireless network.