blog Given the ferocity of the debate which Simon Hackett kicked off against NBN Co’s pricing model a month or so ago, we were somewhat amused last week to see this exchange between the Internode chief (who is a highly prolific writer) and NBN Co’s official Twitter account, staffed by internal PR guru Scott Rhodie.

Rhodie kicked off the proceedings by wondering aloud how he would find the time to get everything done:

Hackett then responded with one of his trademark wisecracks: 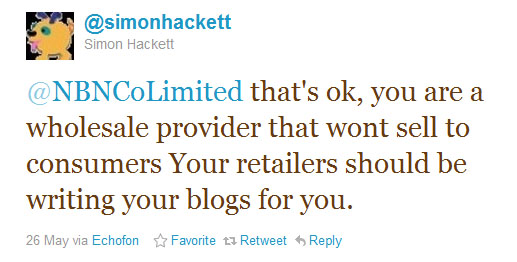 Whereupon the redoubtable Rhodie took the great man at his word:

And Hackett — who, after all, is a rather nice guy who lets various media outlets, including Delimiter, post his ramblings from time to time — makes a rather generous offer:

But Rhodie, a former newspaper journalist with a nose for gold, senses there is more on offer:

And, so lastly, Hackett accepts the guiding hand of his future editor. All is well in the land of telecommunications publishing :)