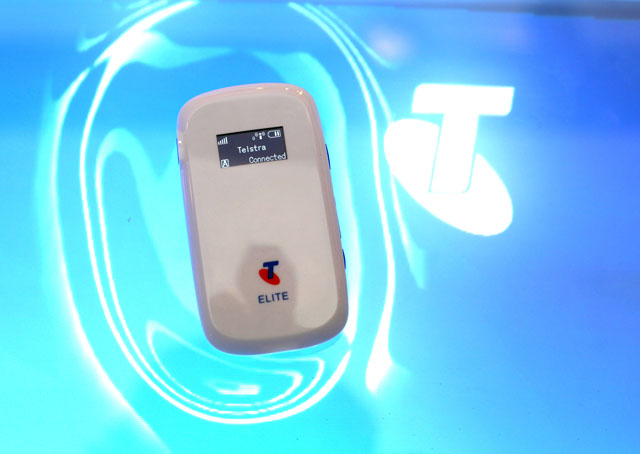 review Telstra’s Elite Mobile Wi-Fi device is a slim, svelte and elegant little handful which promises to bring the fastest 3G mobile broadband speeds into your locale and then share them wirelessly. But is this cute gadget a speedy jaguar — or in reality, just a fat and slow white elephant?

Design
There isn’t much to the Elite Mobile Wi-Fi’s design, but what there is, we like a great deal. At about ten centimetres long, four wide and one deep, the device is small enough to slip into your pocket alongside your wallet easily, or into a handbag or laptop bag. It’s white overall, with Telstra logos on each side, and a ring of blue running around it where its buttons can be found — one to power the device on and one to access the security authentication process.

Here also can be found a micro-USB charging port (the device can be charged via a USB port or direct to a power outlet, with the included adapter) and a microSD card slot to insert storage into the device up to 32GB.

There’s an OLED display of about one centimetre by two centimetres on the device’s base, which gives you basic information such as whether the 3G connection is connected or not and how many Wi-Fi devices are connected. Overall the mini-router’s entire surface is smooth and streamlined — it slips in easily between things in your bag.

Features
There’s really not a stack to say about the device here. It’s designed to do one thing only and do that well — connect to Telstra’s Next G network and route the broadband thus acquired through a secure Wi-Fi connection to your laptop, smartphone, tablet or other Wi-Fi equipped device.

The Elite Mobile Wi-Fi allows up to five devices to connect to its wireless simultaneously, with real-world download speeds expected to be between 550kbps to 8Mbps, and typical upload speeds of 30kbps to 3Mbps. It doesn’t do 802.11n — supporting the previous b/g standards, and it has an active battery life of about 4 hours. Telstra is billing the device as being up to twice as fast as its predecessor. When we connected our MacBook Pro to it, it was using the WPA standard for encryption.

Performance
To be honest, we weren’t tremendously impressed with the speeds we garnered through the Elite Mobile Wi-Fi device — especially when compared to what similar devices can do.

We tested the device in two locations — suburban Randwick in Sydney, as well as a location in the city’s central business district, using the SpeedTest.net site, which measures speed to and from several different servers located in cities like Adelaide and Sydney, hosted by companies like Internode and Optus.

For comparative purposes, we used a similarly Telstra-supplied Elite USB modem, which was purchased in March 2010 — so it’s not the latest model. This device delivered average download speeds of 8.8Mbps in the same location in the CBD, upload speeds of 2.15Mbps, and average ping of 85.5ms. We expect Telstra’s dual-channel Ultimate USB device would do even better.

Even sharing the 3G connection through our iPhone 4 delivered similar speeds to the Elite Mobile Wi-Fi device — showing average download speeds of 2.96Mbps in the city, 2.3Mbps upload speeds and 117ms ping time. This iPhone 4 was also connected to Telstra’s Next G network.

What this test showed us was pretty conclusive … there are devices out there which connect to Telstra’s Next G network at far faster speeds than Telstra’s new Elite Mobile Wi-Fi device — and even a common iPhone 4 is competitive when it comes to sharing its connection via Wi-Fi. Sure, the Elite Mobile Wi-Fi does its job well, has an OK battery life, is stable and doesn’t get *too* hot upon use … but we’d still like to see faster speeds.

Using this device connected to Telstra’s network is going to deliver a sub-optimal result.

Of course, all testing on mobile networks is a bit unscientific and tricky due to their diverse nature across different 3G towers — and we note that other reviews of this device — such as the one on CNET.com.au — were able to get better results in some areas. Furthermore, we’re not precisely comparing apples with apples here — a USB device is inherently more limited a device than a mobile hotspot, although you can, of course, share the 3G USB connection through a laptop’s Wi-Fi facility, and we’ve done precisely this in the past. However, it does say something that our iPhone 4 kept up with this dedicated device.

The device is priced moderately, at $129 prepaid (with 5GB of data to be used within 90 days), or on a business plan from $29 per month with 1GB of included data.

Conclusion
Does the Telstra Elite Mobile Wi-Fi device do its job? Admirably — it pretty much does precisely what Telstra says it will. However, we’d still like to see some faster speeds from a device like this — it’s clearly not taking advantage of the speeds which Telstra’s Next G network can offer. For some less technical and more real-world feedback of our experiences with the device, you may like to check out our opinion of how it performed helping to replace our normal fixed-line ADSL service for a week.