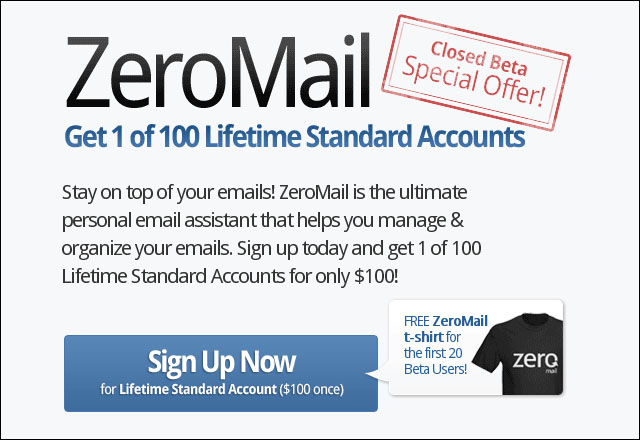 An ambitious Australian technology startup attempting to overhaul the dated email paradigm has launched a beta version of its service, charging $100 for a lifetime standard account.

Launched in mid-January this year and dubbed ‘ZeroMail’, the service was co-founded by local technology entrepreneur Bart Jellema, who is well-known in the startup community courtesy of his strong focus on building its foundations through events, as well as the successful exit of his own startup Tjoos in March 2010. Web developer Katrin Suess has also been involved right from the start of the project.

The aim of the initiative is to reinvent email to bring it up to date with 2011, by cutting out the types of emails that land in people’s inboxes and treating them differently.

For example, the ZeroMail site currently states that the service will only display email from real people in users’ inboxes — with notifications (for example, from social networking services like Facebook), newsletters and emails from groups being displayed in different locations. ZeroMail also pulls profile information about senders from social networking sites, introduced threaded email, and allows users to turn ‘to do’ emails into tasks.

The service works by copying a users’ existing mailbox (for example, from Gmail) onto the ZeroMail platform and mirroring changes — with users being then able to manage both of their email inboxes side by side until they become confident about ZEROmail’s abilities.

A notification on the service’s site published recently notes that the startup is currently looking for 100 people to sign up for a $100 lifetime account as part of a closed beta test. The service will cost $39 per month for a standard account after launch. News of the closed beta was first broken by the iTech report.

“As an early adopter, we want to reward you by offering you a lifetime standard account for only $100,” the site states Your feedback will help us to speed up the development of further features and let us create a personal email assistant that fulfills all your needs!”

A number of other email services do provide base functionality which is similar to ZeroMail — for example, it is possible to manually set up filters in most popular online email services which allow users to filter certain types of messages out of their daily email stream. In addition, most online email services — such as Gmail, Microsoft’s Hotmail and Yahoo! Mail — are currently free for users.

However, the point of difference with ZeroMail appears to be that the filtering takes place automatically — without requiring a users to set it up manually.