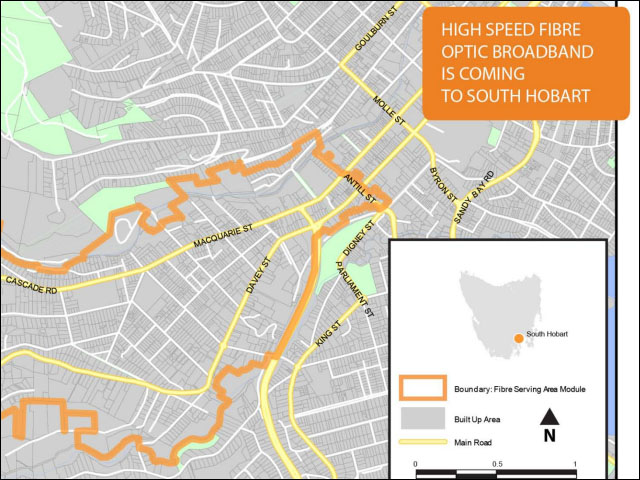 The National Broadband Network Company this morning released maps and timing details for the next stage of its fibre rollout in Tasmania, with the network construction effort to affect some 11,150 homes and business across the state over the next year.

The locations next to receive fibre in the state will be Triabunna and Sorell from May, Deloraine and St Helens from July, Kingston Beach from August, George Town from September, and South Hobart from October.

Construction of the NBN in each location is expected to take from about four to six months, with broadband services conservatively expected to be ready in the second half of 2012 – although a NBN Co spokesperson said some may be available before that time. Those premises not covered by the fibre rollout will receive either wireless or satellite broadband services – with an “interim” satellite service due to be available from July this year and wireless by the middle of 2012.

NBN Co has appointed construction firm Conneq Infrastructure Services to assist with the rollout. Conneq was formerly known as Bilfinger Berger, and is part of the Lend Lease group – alongside Abigroup and Baulderstone.

Tasmania has been at the forefront of the development of the NBN in Australia, and we are very pleased to announce the next phase of construction is ready to commence,” said NBN Co acting head of construction, Dan Flemming.

“NBN Co has chosen a staged network construction approach as it allows us to incorporate learnings from previous work in a process of continuous improvement.” NBN Co has also been partnering with state-owned energy utility Aurora Energy in Tasmania.

The company had said the construction firms had not been able to provide “acceptable” terms and prices during four rounds of negotiations. While Flannigan did not comment on the issue publicly at the time, NBN Co head of corporate services Kevin Brown said the company could not proceed on the basis of the prices it had been offered. Flemming has been acting head of construction since that time.