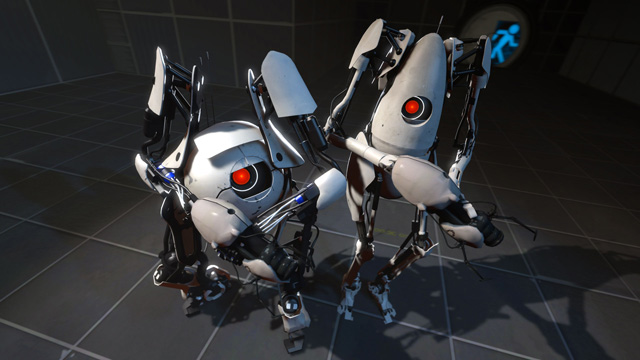 When renowned video game publisher Valve announced April 21 this year as the Australian launch date for the sequel to its critically acclaimed Portal title, local fans were ecstatic. After all, what could be better than getting such a highly anticipated game just before the Easter long weekend kicked in, with five whole days away from work to enjoy it?

Questions like: Why was giant local retailer EB Games charging $88 for Portal 2, when the game could be bought directly from Valve’s digital download service Steam, for US$49.99 (AU$46.25)? Why was EB Games charging even more — in fact, more than twice as much ($108) for the Xbox 360 and PlayStation 3 versions of the game?

Even JB Hi-Fi — the king of discounting — was charging a premium for Portal 2; $79 for the PC version, and $89 for the console versions. And similar prices could be seen at other retailers. The prices were also dramatically different from those seen in the US, where Valve is headquartered. Giant US retailer GameStop, for example, was also selling the PC version of Portal 2 for just $49.99 — either digitally or via a boxed copy — while the console versions went for $59.99 each.

Spokespeople from EB Games and JB Hi-Fi couldn’t be reached last week for comment on why local prices were so much higher than in the US — or even through Valve’s Steam platform, which is accessible to Australians. But the phenomenon is not a new one — retail price increases for the local market have been a feature of the Australian video gaming scene for some time.

According to Ron Curry, the chief executive of the Interactive Games & Entertainment Association, which represents a number of large and small games manufacturers locally, there are a number of factors in general behind higher local prices for games. For starters, he said, there was the cost of getting boxed copies of games out to remote locations in Australia’s widely distributed population base.

For example, Curry said, while it may be cheap to get 100 copies of a game to a store in the Sydney suburb of Liverpool, it would cost dramatically more to get the handful of copies needed to Alice Springs, Hobart or even smaller locations like the town of Karratha in Western Australia (with a population of 11,700) for the launch day sale.

“Distribution is hellishly expensive,” Curry said — and trying to explain that fact to parent companies in the US can be “a nightmare”. Australia was fairly unique in that regard, the executive said — the distance from Sydney to Perth, he pointed out, would be akin in Europe to shipping a product from London to Moscow.

Then there’s also the cost of doing business Down Under. With large amounts of mandatory annual leave allocations, public holidays (such as the Easter long weekend just passed), superannuation, high levels of taxation, occupational health and safety insurance and more — local regulations ensured it was “very expensive” to run a company locally.

Lastly, Curry pointed out that much of the time, wholesale prices were set in the US and the UK and then imposed on Australia. If the value of the Australian dollar appreciated, Curry said, international distributors may up their price as well, to maintain their own margin on sales — with Australian retailers being caught in the middle.

One local video gamer to pick up Portal 2 last week was Ian Gardiner, the chief executive of video streaming player Viocorp. Gardiner bought Portal 2 through Steam for under $50, which he considered a fair price. “I didn’t actually look at what it cost — it was one of those ‘sub-$50, I don’t really care’ purchases,” he said.

Would Gardiner pay more — as retailers are asking customers to with Portal 2 — for a console version of a game? “Probably,” he said, noting although he would be happier if all game distribution moved to the internet, buying games on disc for his Xbox 360 felt right. However, Gardiner noted that the price for all versions should be about the same — as development costs shouldn’t change between the three different platforms.

In general, Gardiner said the most he would pay for any game would be about $100. In comparison, he said, he took his children to see the new Thor film in 3D over the weekend. By the time his family parked and bought its tickets, the outing cost between $110 and $120 all up. “Buying a game for that price seems about right,” he said of the $100 watermark.

Even so, however, Gardiner noted if he did need to buy an Xbox game, there were other options for doing so than going direct to the major retailers on launch day. For example, he noted launch day prices would come down significantly after just a few months — and he also bought games through an online retailer on eBay, where he paid “about 20 percent less” than the big retailers would charge.

Curry said digital distribution — where games are bought and downloaded directly online through services like Steam or XBox Live — did reduce the cost of distribution, although it could vary between different business models, with the cost of doing business in Australia still hitting some.

However, he noted that in general, over the long term, game pricing in Australia had remained fairly static or even dropped a little in the long term. Brand new games had tended in the past to cost between $99 and $119, he said, whereas now they could be between $79 and $99. In one example, the eagerly anticipated Gears of War 3 game is currently available for pre-order from EBGames for $98.

In addition, Curry pointed out that the discount cycle was much faster than it used to be — with games quickly coming down in price to between $29 and $49. “We’re now in an environment where gaming is just so popular,” he said. “There’s an array of product in the market, so its quicker to push that pricing cycle down.” And some prices charged in the past would likely be considered impossible today — for example, Curry said he had recently been discussing the launch price of Mortal Kombat 3 on the Sega Megadrive — sold in 1995 for $189.

With the changing nature of distribution technology, booming video game empires on new platforms such as the iPhone and iPad and even the impact of commercial arrangements between publishers and distributors, perhaps only one thing remains certain about video game pricing in Australia — it will continue to be the subject of intense debate.

And consumers will likely continue to be on the side of standardised global pricing. “A lot of this stuff makes no sense,” said Gardiner, noting he had seen major geographical price differences in other industries — such as cycling and even sunglass retail — as well. “This whole US versus Australian pricing is becoming a joke.”