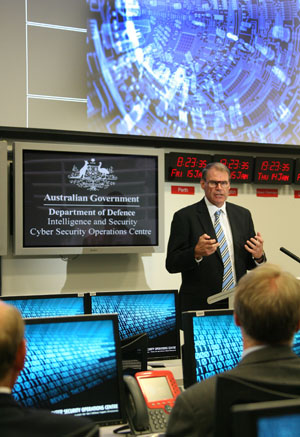 In an excerpt from his speech released this afternoon, McClelland said cyber-security continued to be at the forefront of the Government’s agenda. He said while cyber-intrusion was a distinct method of accessing private information and disrupting critical systems, it was also a “people problem” — as individuals hack computers.

He said the modern world posed new cyber-threats for governments and that therefore new instruments were needed. “For this reason, ASIO has also established a specialist cyber investigations unit to investigate and provide advice on state-sponsored cyber attack against, or involving, Australian interests,” he said in the excerpt.

The Labor politician said the new threats required cooperation among agencies, citing the fact that Australia’s national computer emergency response team (CERT) was already operating along with other Government agencies as well as a network of international partners to improve Australia’s cyber-security.

“CERT Australia works closely with the Cyber Security Operations Centre (CSOC), based within the Defence Signals Directorate (DSD), which focuses on identifying and responding to cyber-incidents of national significance,” he said. “ASIO is also working to guard against foreign interference and espionage, including via technical means.”

McClelland reiterated this network of cooperation was crucial to tackle the threats of those using the internet as a modern tool of espionage which — he said — could facilitate access to large volumes of sensitive government and commercial information. “ASIO’s close co-operation with CERT Australia and the CSOC seeks to identify developing threats and determine appropriate responses,” he said.

He added cyber-security was a growing issue globally, citing a break-in at the Dalai Lama’s office and some “critical” Estonian infrstructure that had already been exposed to the new cyber-threats. ”These attacks and the threat to critical infrastructure such as banking, telecommunications and government systems is not something we can be complacent about,” he said.

As the menace expands globally, the Attorney-General remarked the Australian Government would work to establish a broader international cooperation for cyber-investigations. Tonight he will announce his intention to join the Council of Europe Convention on Cybercrime which – he said – is the only binding international treaty on cybercrime.

“Accession to the Convention is a critical step as it facilitates international co-operation between signatory countries and establishes procedures to make investigations more efficient,” he said. “As such, it will help Australian agencies to better prevent, detect and prosecute cyber-intrusions.”