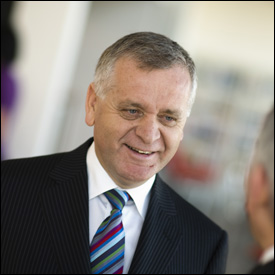 SMS Management and Technology Limited (SMS) today announced it was planning to import more brains from the UK and Ireland as well as hiring locally, as its revenues and earnings headed substantially upward over the past six months.

The mid-tier IT services company today released its half-year results, highlighting revenue of $146 million for the six months to the end of 2010 — a figure up 24.7 percent on the same period 12 months earlier. Earnings before interest, taxation, depreciation and amortisation (EBITDA) also grew by 18 per cent, and net profit after tax (NPAT) reached $15.2 million, improving by 14.7 per cent.

The company’s chief executive Tom Stianos (pictured) said he was pleased with the results, as the company managed to return the business to a growth tempo in 2010. Also, he said SMS had signed contracts for new work worth over $170 million during the six month reporting period.

The executive said competition for IT skills had grown fast in the last six months, and that in result the company turned to recruit more staff from the United Kingdom and Ireland. Stianos explained SMS had developed a complimentary recruitment channel online, through social media, like Facebook and Twitter, which targets professionals abroad.

“We realised there was a lot of senior, experienced talented professionals who ordinarily might not want to move, but given the economic conditions in Europe, in the UK and Ireland now, they could be tempted,” Stianos said, noting SMS was now running its third intake of the last 12 months and had received a good number of foreign candidates, as new employees recommended friends to apply as well.

Stianos said this practice had proven to be successful in increasing recuitment, retention and development of new staff. “We sponsor them for three years, and at the end of the three years, the vast majority of them end up applying for permanent residency,” he said. “They proved to be very sticky and very loyal.”

Asked about the revenue growth, Stianos said one of the key drivers of the positive result was recruitment itself, along with pushing sales and investing “a lot” in new service offerings, through business acquisitions such as Bright Blue which – acquired in February 2010 – expanded SMS’ capability to offer customer relationship management solutions.

However, although SMS had gained the new facility in Vietnam, Stianos said the company would continue to hire more employees locally. “The offshore recruitment would be relatively small for us in this half,” he said. “Most of the next couple of years will still be local recruitment or people from overseas will join us locally.”

Stianos said SMS did intend to expand its offshore capabilities to support its offering of Microsoft applications and Filenet products, but he reiterated the effort would be aimed at expanding the company’s information and data management services; an area which – Stianos said – had proven to be successful.

The executive said more acquisitions could also follow this year, if SMS managed to find the right company at the right price. “All acquisitions are aimed at expanding our service categories and giving us cabilities we don’t already possess,” he said, adding new acquisitions couldn’t happen at the expense of SMS’s shareholders. “We maintain a pretty good price discipline, we’re on the market and if we find one we’ll do it,” he said.

Stianos refused to give guidance on the financial outcomes of the next half of the year, but maintained he was optimistic and that work needed to be done to improve the margins of the business.