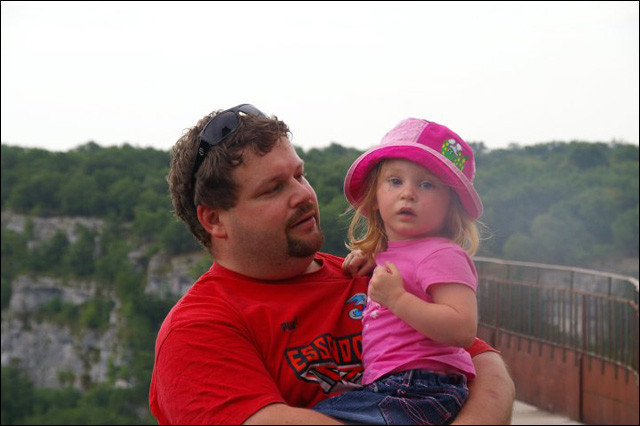 Michael Wyres is that most valuable of beasts; an engineer as good with words as he is with technology. Equally adept at his day job — developing Voice over IP and unified communications solutions — as he is at analysing the telecommunications industry, Wyres is a frequent commenter on his popular blog and on online forums, and can also be found on Twitter. Oh, and he’s also a proud Dad. He’s this week’s guest for the Friday Five.

That actually depends on what you call a “real job”!

I did a couple of brief stints (along with my two sisters) helping out over school holidays at the component manufacturing plant where my father was the production manager. I remember one summer individually checking literally thousands of those army spoon/can opener/bottle opener combination contraptions, making sure that the blades were all attached properly. I still get apoplexy every time I see one of those damn things!

As for the IT industry, while studying computing at the University of Ballarat during the early-to-mid 1990s, a late night thunderstorm basically destroyed what was an already very poor student dial-up bank, and late night telnet sessions became impossible. Someone amongst the “powers that be” decided that it wouldn’t be repaired, and the small group of serious online students at the university were at a loss. Not to be outdone, a lifelong friend (who was studying engineering at the time) and I “offered” to redevelop the university’s very poor website – in what was become the first serious attempt they’d made at a website at that time. Our “payment” was to be given access to the staff dial-up bank so we could update the site as we worked on it.

Naturally, we would never have considered using it for other purposes!

On a professional level, while at the university I obtained Novell Certified Network Engineer accreditation, and took that into a three-year stint as a network support officer in the Melbourne office of preeminent Australian law firm, Mallesons Stephen Jaques. While almost all people in a firm like that are great people and easy to get along with, you certainly get an appreciation for where some lawyers get their reputations for being difficult people! It certainly was an interesting place to hone your customer service skills!

These days I am primarily involved in developing VoIP/FoIP solutions, but seem to bounce around a number of different projects within the company I am with at the moment. It’s nice to be valued.

I guess it’s a fairly easy statement to make, but there just are so many good people in the industry in this country. I’m lucky to say that I have worked with many people who have taught me a lot, and who I’ve been able to teach things.

The traditional sense of “Aussie ingenuity” is alive and well in technology in Australia, and there are countless great ideas out there, looking for somewhere to grow. I think the industry is in very good hands from a “brains” point of view. I do see a lot of good people heading to the UK and the US in particular to get their big ideas truly up and running in big economies, and it’s a shame that staying at home to do this is so difficult.

Aren’t hobbies something for people with spare time on their hands?

Back in my school days I used to do a lot of camping and hiking, and played high school cricket and football – (Australian Rules of course, you know, real football?) – and was a sprinter in athletics. I was even part of a Victorian state invitational 4 x 100 relay championship win in Year 10 I think it was.

Australia is almost unique in the world that such a great percentage of our population lives in a narrow strip up and down the eastern seaboard. The backbone of the Australian economy since our nation was born has been farming and mining, yet it is these people and industries who miss out on services when big business or government does the numbers against almost any service or infrastructure program. Small rural towns are dying because people just can’t live in these places in the modern world, and need to move to where the services they need are available. The towns die, and the mining and farming industries can’t get a workforce, and that starts to slowly kill off those industries.

It’s something of a cliche, but ubiquitous access will allow the “digital divide” to be significantly narrowed.

The problem here is while we have the potential to be as good as any other nation in delivering technology services – whether they be for business or consumer consumption – the relatively small size of our economy compared to other countries, makes it difficult for an idea developed here to reach global proportions. If Mark Zuckerberg was an Australian, the chance of him getting Facebook up and running in the Australian economy and have it reach the size it is today would be close to zero. Our infrastructure – although improving – just wouldn’t cope, aside from the economic constraints. So much of our telecommunications infrastructure is heavily outdated.

I would hate to see our kids grow up in a world where other nations streak ahead of us thanks to better communications by having a lack of foresight now. Whether the politicians realise it or not, more and more, life is becoming an online business, and I don’t see that changing anytime soon. Although the debate is very colourful and heated at times, it is why programs such as the National Broadband Network are crucial for Australia to be relevant in the world of tomorrow. If we start today, it will be ready ten years from now. If we wait ten years as some would have us do, it will still take another ten years from then to acheive, and I don’t think that in 2030 we can afford to be twenty years behind the countries that have this kind of infrastructure right now.

Both of my parents were very hard working people in their working days. My father spent many years as a Holden dealer in my hometown of Ballarat after taking over the business from his father, and even when he let that go for a new challenge, anything he did always saw him doing extra hours to get things done. My mother was an Intensive Care nurse, and the very nature of what that means suggests a hard work ethic. They both had their challenges in their careers, and watching them handle them I learnt not to take things lying down. If you believe in something, with your actions show the world you believe in it.

Out of left field, as a motor racing buff I’ve long been a fan of Larry Perkins. Although he is not so involved in the sport anymore himself, anyone who knows his history in the sport will understand his passion for attention to detail, and that’s something I aspire to also. Don’t be afraid to make mistakes, but if you want to do something, try and do it right.

In recent years, my partner Naomi and our gorgeous little girl Hannah – (who just started primary school this week) – inspire me every single day to do the best I can to give them everything that I can.