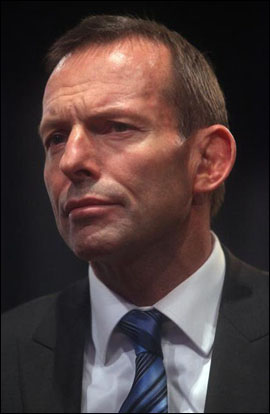 Opposition Leader Tony Abbott has called for the National Broadband Network project to be scrapped and its capital funding allocated instead to the reconstruction effort in the wake of the disastrous floods in Queensland and the lesser ones in Victoria.

“It’s time for the Government to stop spending on unnecessary projects so that it can start spending on unavoidable projects such as the reconstruction that will be needed in Queensland and perhaps in Victoria as well,” Abbott told journalists in Sydney today. “It can start with the National Broadband Network.”

The Liberal leader described the NBN as “a luxury that Australia cannot now afford”. “The one thing you don’t do is re-do your bathroom when the roof has just been blown off and that’s the situation that we find ourselves in right now,” he said.

The capital investment required from the Federal Government to build the NBN was estimated in NBN Co’s business plan released in late December as $27.5 billion, but the last Federal Budget did not include significant funds devoted to the NBN, as some of the money was included in the Contingency Reserve — an allowance held principally to reflect anticipated future events which could not be detailed at that time.

NBN Co also expects ultimately to make a return on the Government’s investment in the NBN, meaning the money will be recouped in the long term.

When a journalist pointed out today to Abbott that the NBN funding was not included in the budget, Abbott did not directly answer the question, but flatly stated the NBN project would involve “some $50 billion plus of government spending”. “The point I make is that when you’ve got an absolutely urgent and unavoidable spending commitment, you don’t go ahead with unnecessary and avoidable spending commitments and that’s what the NBN is,” he said.

The Opposition Leader also took aim at what he described as a lack of transparency surrounding the NBN process. This week it was revealed that the Labor Federal Government did not believe NBN Co would be subject to freedom of information laws. Abbott said not only was the NBN “the most expensive government infrastructure project in Australia’s history” — but it was also “the most secretive”.