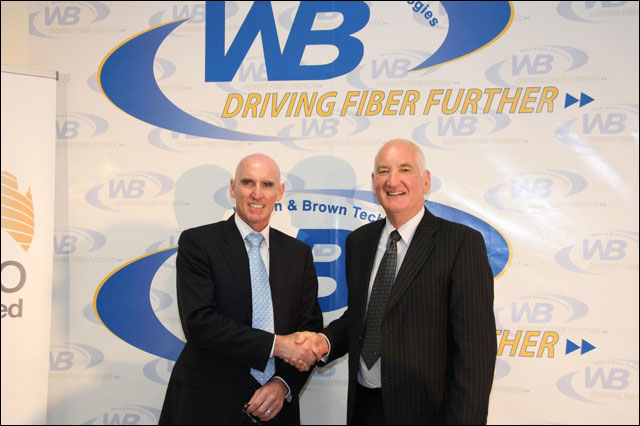 The National Broadband Network Company has inked more than a billion dollars worth of contracts with local manufacturers, in a move that is slated to create hundreds of Australian jobs in the sector.

The deals — worth a combined total of $1.6 billion — were awarded to local company Warren & Brown Technologies and “Australian-located” global companies Prysmian and Corning. All three companies supply hardware and/or tools associated with fibre-optic telecommunications rollouts.

A statement issued by Corning said its contract constituted an initial purchase commitment of $400 million and could potentially be worth up to $1.2 billion over the life of the deal. “The size and scope of the NBN project will enable Corning to invest in both new equipment and technologies for our Clayton facility as well as create a significant number of additional jobs, increased people development and extensive skills training,” said Rainer Dittrich, managing director of Corning Cable Systems in Australia.

As a result of the contract, Corning will invest about $25 million in its Clayton facility, as well as in related equipment and personnel training. The facility employs 115 workers, but in the peak years of the NBN deployment, Corning expects to add as many as 300 to 400 jobs there.

Corning has had an existing relationship with the NBN rollout in Tasmania. In October 2009, NBN Tasmania announced Corning would provide fibre-optic cable for the construction of the NBN backhaul network in the state.

A statement issued by NBN Co said the value of the Warren & Brown contract was worth up to $110 million over five years, with an initial purchase order of $50 million and would see the company supply optical distribution frames and sub-racks that would connect NBN Co equipment to external cabling. “We are pleased to award this contract to a local quality manufacturer of fibre-optic equipment which has a long tradition in precision manufacture,” said Quigley.

“One of the benefits of local manufacture is the ability of Warren & Brown to fill orders within short timeframes to meet the rollout requirements of NBN Co, which is currently in the process of building the network in its five first release sites.”

Warren & Brown managing director Neil Domelow said it had been very difficult three years ago, when the world economy was heading south, for him and fellow director Steve Normoyle to proceed with a $5 million upgrade to its facility in Maidstone, Melbourne. “Winning this NBN Co contract proves that our belief in the future of telecommunications fibre technology was justified,” he said.

Prysmian’s contract is worth $300 million over five years, with an initial purchase order of $150 million. The company has manufacturing facilities in Dee Why and Liverpool, NSW and will invest in its facility locally to boost the amount of manufacturing it does in Australia. “Directly, this contract will also result in new employment in our Dee Why manufacturing facility of up to 50 jobs over the initial five year period,” said Prysmian Cables and Systems chief executive Llyr Roberts.

“Through this deal, NBN Co has secured a commitment to increased local manufacturing over a two-year ramping up period, and to recruitment and training activities to help fulfil the local sourcing requirement,” said Quigley.

In a statement issued this morning, Carr said the announcement demonstrated the Labor Federal Government’s commitment to actively promoting opportunities for local small and medium-sized enterprises to participate fully in the NBN project in “meaningful and continuing ways”.

“In selecting the companies, NBN Co undertook a procurement process consistent with their corporate plan and related 30 year business modelling. During the process, the companies demonstrated a commitment to investing in local manufacturing and skills development, to deliver the volumes required,” the Minister’s statement said.

Carr said the contracts would result in the creation of some 400 Australian jobs in the manufacturing sector for the three companies. “Their involvement in the NBN rollout will create jobs for Australian workers and increase the skills we have in this country,” he said.

The full NBN Co media release can also be downloaded as a PDF document.