NSW public transport agency RailCorp is facing fresh allegations of problems within its IT department, with the state’s auditor-general publishing a report today detailing extensive delays in the delivery of IT projects and cost overruns amounting to $41.4 million.

RailCorp has been without a chief information officer for 18 months to this date, after then-NSW Transport Minister David Campbell acknowledged in June last year that its then-CIO had been stood down from the CIO role following an allegation of “dishonest or corrupt behaviour”. The CIO resigned in October.

Since last year the IT portfolio has been being managed by Railcorp’s group general manager of finance and corporate services Gary Pedersen in an acting capacity.

“IT system implementation issues in transport agencies are a concern,” the office of the State Auditor-General Peter Achterstraat wrote in a statement associated with a financial audit of RailCorp today.
In the report, Achterstraat detailed a raft of delays and cost overruns within RailCorp projects. Delimiter has invited the agency to respond to the issue.

The biggest cost blowout related to a transformation of RailCorp’s procurement systems, which was initially budgeted at $20.4 million but ended up costing $35.1 million when it was completed in January 2010 — six months after its scheduled end data of July 2009. Its problems also resulted in a flow-on effect.

“Over a 5-month period, RailCorp’s $35 million new procurement system resulted in over $100 million in late supplier payments and more than $4 million in double payments,” the report stated.

However two other projects saw large cost overruns — a station passenger information system was rolled out at a cost of $18.4 million (budgeted at $8.7 million) and an upgrade to RailCorp’s finance systems ended up costing $19.4 million (up from $9.7 million). Both projects are also subject to delays — the first was scheduled to be completed in June this year but will now be finished in June 2012, and the second has been pushed out from April 2011 to June 2011.

Several projects came in under budget by amounts in the low millions, but there were another handful in the red and one project was terminated.

When RailCorp advertised its CIO role, the job description made it clear how serious the responsibilities are that come with the position. When a new CIO is appointed, they will oversee 360 staff in total, as well as a capital budget of over $100 million and an operating budget of $105 million.

Five other senior IT executives within RailCorp report directly to the CIO — general managers of strategy and architecture, project management, ERP delivery, portfolio delivery and operations delivery — as well as several other staff.

RailCorp wasn’t the only public transport agency to come under fire in the report. The cost of the NSW Roads and Traffic Authority’s Driver and Vehicle Computer System Project (an upgrade of its DRIVES platform) has blown out from $9.3 million in 2004 to $32 million in 2009, owing to increased scope and changes in direction of the project, according to Achterstraat.

DRIVES is “a vast, complex and critical computer system” that the RTA uses at its registry offices to administer about seven million motor vehicle registrations and two million driver licences in the state. A major upgrade of the platform was commenced in 2004.

The initiative quickly ran off the rails, with Achterstraat finding project expenditure links to milestones were not adequately monitored, project management was deficient, there was insufficient record-keeping and so on.

However, the RTA has made improvements in project management and reporting since 2009 — with a formal project methodology and a governance framework being put in place over the past two years. The agency also now manages all “system” projects through its project management office. 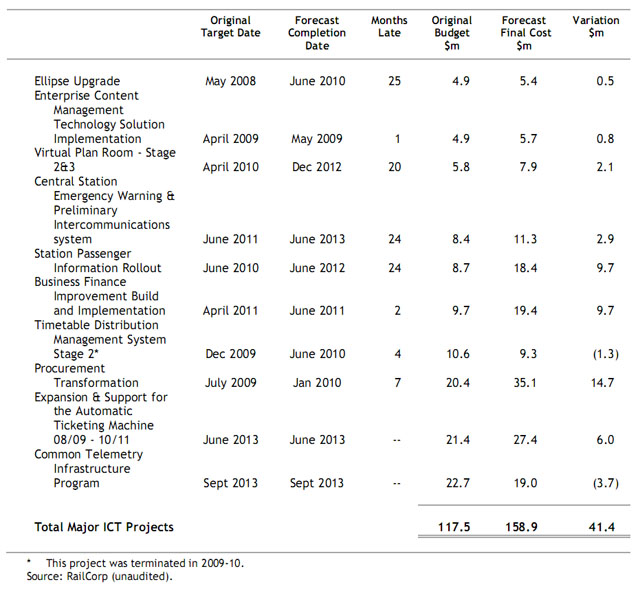