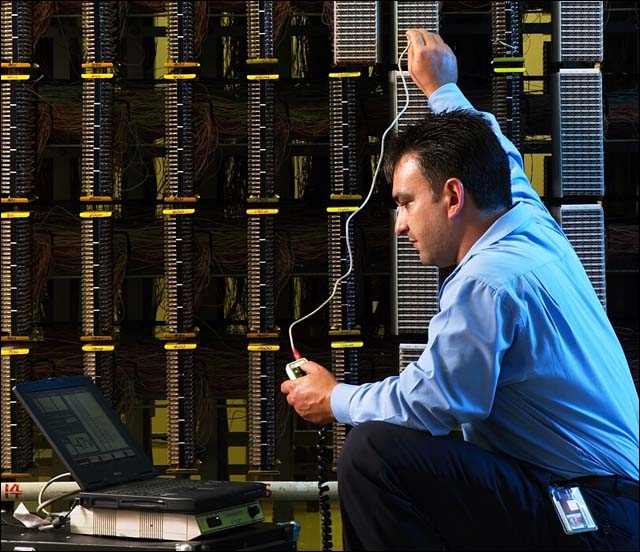 This article is by Peter Carr, the managing director of Longhaus, a leading Asia-Pacific ICT industry analyst firm covering Australia and near shore markets. Carr is a veteran of the industry, and has also held managing roles at leading analyst firms Forrester Research and META Group. This article first appeared in the firm’s Longview journal (PDF) and is published here with its permission.

analysis A great period of opportunity for change in Australia’s ICT industry has come and gone in the past two years. As an industry there was great hope for the promised outcomes from Kevin Rudd’s 2020 Summit and Gershon Review. But with the Rudd Prime Ministership passing, the new government has taken the opportunity to close the book on ‘old’ schemes, and both of these widely heralded efforts at transforming Australia and its public service have come to little.

Instead, the focus returns to a single-minded infrastructure view of ICT through the National Broadband Network and all else remains the same. But as a nation we are sitting on a time bomb.

At some 500,000 people, Australia’ s entire ICT workforce represents approximately just 20 percent more than IBM’ s total global workforce. To put that number into an even more stark perspective, at 500,000 there are just 100 ICT workers for each of the top 5,000 companies in the country and none for the other 200,000 with 20-199 employees. In global terms, it is clear that the Australian ICT workforce is small, yet in terms of demands the expectations are significant. On one hand — at the top end of town — ICT workforce sizes continue to get larger, while at the other end Australia’s mid-market is beginning to mature from a very low base of ICT skills.

There is little doubt that these emerging businesses will certainly require more skilled ICT support, not less, in the years to come. The result is that this small workforce is consistently put under economic pressures of technology renewal that often result in skills shortages and price spikes in the cost of ICT labour. Most often the blame for such spikes and shortages are levelled at the industry itself, or even worse the brokers or recruitment companies that deliver the much needed, highly mobile and contingent skills required to effect the ever-present cycle of ICT renewal.

The other critical factor is that Australia has a service-based ICT economy. This is evidenced by the fact that as a market the ICT economy continues to grow in 2010, despite a $30 billion trade deficit in hardware and software. That is, Australia does not build technology, it buys it and implements it and maintains it. As Reserve Bank Governor Glenn Stevens observed last month, Australia’s use of IT as a productivity improver and its continued investment in industries of comparative advantage — like the resources sector — had served the national economy well.

Yet serious debate has never been undertaken in Australia to discuss the required changes in the ICT skills market to deliver Australia from a self-imposed future economic nightmare of a country without skilled labour in the ICT economy. Instead, when it comes to services and labour, governments and many organisations continue to pursue a procurement rationalisation approach to cutting the cost of ICT labour, without enabling enduring strategic change that could provide a sustainable future for Australia and its businesses.

While often portrayed through the lens of high-flying, well-paid executives and consultants, just like any industry, the ICT sector is actually constituted of a labour-force that is both blue collar and white collar in nature. Just as in the health industry, not everyone in the ICT industry in Australia is the equivalent of a brain surgeon, drives a 7-series BMW and holidays in France. And just like the health industry, the ICT industry too has people that push trolleys, draw blood and analyse bodily matter.

Similarly, not everyone in the mining or banking industry makes million-dollar annual bonuses. Somebody still goes down the mine and somebody still helps the kids count their money boxes. This is at the heart of the core distinction between blue collar and white collar ICT that looms as a huge challenge for the national ICT economy moving forward (see Table 1).

One of the key problems is that according to Longhaus’ analysis, Australia has a significant imbalance in the mix of blue and white collar ICT. A basic scan of the last several years of media reports would not yield too many articles criticising a lack of ICT strategies, sales people, project managers or solution brokers — yet would be awash with articles complaining about the lack of skills, high-wages, calls for certification, end-user complaints of B-Team delivery, and more.

It is clear that Australia has an imbalance and this imbalance has two-sides. On one side, Australia’s dominant white collar labour force is being commoditised into a blue collar labour force. Why else after 30 years would we suddenly require our first ICT Wages Award, as was introduced in 2010 by the Gillard government.

On the other side, as a nation we simply will not have the required quantity of blue collar workers to meet our future needs (see Figure 1). As Stevens rightly points out, the best thing for our economy is people who know how to apply the technology (the white collar workers), but these people can only be effective when supported, either internally or externally, by a blue collar workforce. The tension of Australian’s workforce commoditisation is visible in the recent and ongoing high profile union struggles within companies such as IBM, Telstra and HP. 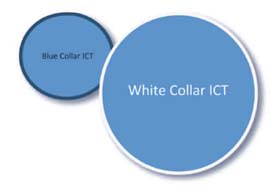 Part of the answer lies in firstly the recognition and quantification of the need in a services-based economy for both a blue collar and white collar labour force, and secondly, the implementation of policies that support the maturing of those requirements in the market to future-proof the Australian economy. The policies that are required to support the ICT industry and the challenges that the country faces in continuing to grow as a leading first world economy stem from the source of labour within blue collar ICT, or expressed another way, the size of the labour pool. And in that area Australia has a significant shortage that will not be addressed by increasing university enrolments in ICT courses, and supporting “local” Australian companies.

Instead governments must liberate their thinking on the use of off-shore labour-hire companies, including the 27 Indian off-shoring companies that Simon Crean identified in his department’s 2010 Australia-India FTA Feasibility Study assessment of the market for a proposed (and imminent) Indian-Australia free trade agreement. It is a continuing hypocrisy that the Australian Federal Government actively courts these firms for their foreign investment balance sheets, (such as the recent opening of an MphasiS facility on the University of Wollongong campus) while publicly outcrying the use of such services in the face of union pressure and misinformed policy makers.

Even outside of direct ICT business, Crean himself pointed out recently that “120,000 of more than 600,000 overseas student enrolments in Australia last year were from India”. As a vocal opponent to offshoring, Senator Lundy’s new role in the Gillard Government will do little to address the required change in this area. The Government’s positions on such issues are often given in throw-away press statements that are in no danger of soliciting debate. It would be our observation that such positions are based on political rhetoric, hypocrisy, and undeniable fiscal mismanagement.

Not only would the use of more offshore labour in Australia ease the frequent skills shortages experienced by big business in this country, but it would also alleviate wage spikes, and above all usher in a new wave of fiduciary responsibility amongst Australian government policy makers that are over-influenced by budgetary and election business cycles as opposed to the true cycles of strategic business change enjoyed by the leaders of the private sector.

Instead, governments appear happy to continue to employ global brand name system integrators that are forced to skim the market following a tender win and place junior blue-collar ICT workers that are only two-pages ahead of the client in their reading of the implementation manual. Why is this the approach adopted over use of skilled offshore labour? Then, when things go wrong, due to under-staffing and inappropriate skill levels, more governments cry foul and accuse their suppliers of not properly delivering on contractual requirements despite effectively crippling that service delivery partner’s full global delivery capabilities.

Protectionism of Australia’s home-grown blue collar ICT labour powerhouses such as CSG, Oakton, UXC, Data#3 and Datacom should not be a position that ultimately holds back the nation. A quantified assessment and segmentation of the nation’ s ICT skills base would dispel any myth about jobs being “lost” to foreign nationals. Longhaus would also encourage the Brazilian, Russian, Indian, and Chinese (BRIC) services companies affiliated with, or members of the Australian Information Industries Association (AIIA), to begin an active push for agenda change by the industry association.

Secondly, Australian government’s at all levels should figure out once and for all how to address the significant imbalance in their distribution of funding for developing service-based ICT companies in Australia. Let us immediately put on the table that it is absolutely imperative that the nation’ s hardware and software entrepreneurs be supported but it cannot continue to happen at the expense of the services-oriented heart of the country’s ICT economy that provides the environment in which those manufacturers and ISVs exist.

Today’s governments are well-equipped to manage fleets of cars, flotillas of coal carts, or horizons of roads but they remain ill-equipped to deal with the intangible IP-based ICT services businesses that run the nation’s ICT economy. In effect, all of the grant money funnelled into the country’s home-grown software and hardware ICT companies by public, private and government investors are effectively gambling on the creation of a Microsoft, or IBM, or Oracle, or two of the three in order to generate the global revenues and profits that would be required to turn around the current $30 billion ICT trade deficit to a sustainable surplus. We simply will not see it in our lifetime.

The bottom line is that Australia lacks call centres, cloud computing hubs, ICT hardware and software manufacturing capability not because we don’t have high-speed broadband. Rather it is the lack of a definable understanding of how ICT services and their supporting labour force will take its place in the roll-out, development and economic benefit of the NBN that represents the real issue needing to be addressed.

Above all Australia, lacks a sustainable blue collar ICT workforce capable of keeping pace with our place in the region, and simply unionising our existing white collar force is political and corporate folly.