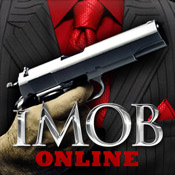 blog The chief executive of the Australian Crime Commission, John Lawler, gave the sort of speech last week that Australia’s security experts love to hear. In short, it was full of hyperbole about the dangers of the new “virtual world” that criminals are tapping into online. Some of the choice quotes:

Just as an aside, I’d like to mention that while researching this speech I came across a rather disturbing mobile phone game. It’s called iMob Online and players are asked to create a name and profile, selecting one of three mobster classes and then accumulate weapons, vehicles and “friends” to join their mob so that they can take on criminal missions and battle other mobsters.

I’m still wondering who the development consultant was for this game.

God knows what Lawler would think if he knew about the Grand Theft Auto series. And then there was this:

Already the UN is grappling with the complexities of cloud computing where data and programs cease to be stored on desktops and instead are stored remotely on a cloud of web servers that expands and contracts as needed, like hotmail or gmail accounts.

People are embracing this because they can access applications or data from anywhere in the world via any number of devices other than a computer.

Now I don’t want to get into slamming Lawler’s speech too heavily. It contains a hard dose of common sense and overall it represents a good overview of some of the challenges that law enforcement authorities face in attempting to deal with a criminal underworld which is using modern technology to do “business”.

However, I do want to say one thing: If I was a criminal and I read this speech I would probably fall over laughing. The way that Lawler talks about such destructive technologies as iPhone mafia games — even if, as I suspect, that particular comment was an attempt at humour — reveals he feels a little bit uncomfortable in this ‘new world’.

The problem is, the fact that people are using commonplace technologies to commit crimes shouldn’t be anything new for Australia’s law enforcement authorities. Hotmail, Facebook, even iPhone apps and video games about the mafia — all of these things have been around for years. The fact that Lawler is discussing them this way kinda gives the impression that the Australian Crime Commission is out of date.

There is absolutely no reason why, in 2010, Australia’s police should be looking at Facebook, iPhone mafia games and even cloud computing as if these things are new, strange or hard to understand. These are the technologies that most of Australia lives and breathes every day. Of course criminals are going to be tapped into them — criminals are people too. So can’t Australia’s police hire a few ‘young guns’ who understand all this?

There must be plenty of senior police by now that really ‘get’ technology and don’t look at it as if it’s some kind of alien world.

I mean … it’s not rocket science, is it?