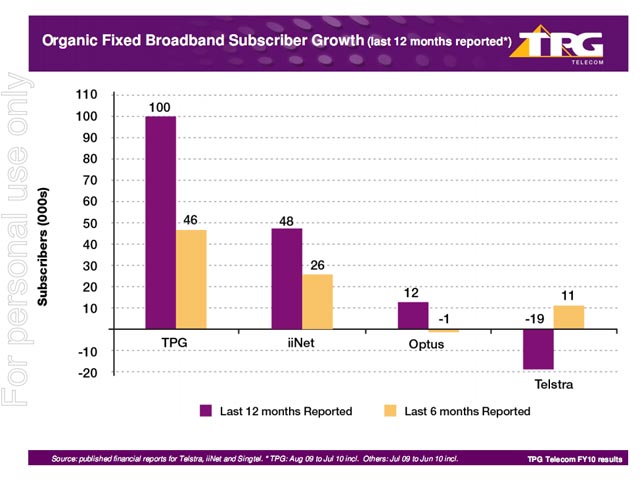 National broadband provider TPG today claimed it was signing up customers faster than any of its rivals, including fast-growing iiNet, as well as the nation’s two major telcos Telstra and Optus, with the upstart telco on track to crack the half a million customer level by the end of September.

In documents associated with its annual financial results released today, the company published a chart (above), which appeared to show that it was gaining broadband subscribers on an organic basis — that is, without acquiring other companies as iiNet has — much faster than competitors. TPG added more than 100,000 new subscribers (net) over the past year, with numbers growing especially fast over the first six months of the financial year.

The growth will put TPG just behind iiNet in terms of subscribers, with iiNet revealing last month that it now had 539,000 broadband customers with the acquisition of Netspace — and would add another 113,000 more with its buyout of the consumer division of AAPT.

There are only “four and a half” meaningful players left in Australia’s internet service provider market, iiNet supremo Michael Malone said at the time — with companies like Primus, Eftel and others just not relevant any more in terms of providing competition. The “half” was Internode.

However, TPG’s mobile customer base was actually shrinking — down from 219,000 in January 2009 to 201,000 in July 2010. The company is speedily transferring customers from its Soul brand onto the TPG Mobile brand.

“TPG has continued to lead the broadband marketplace in providing high-speed services of excellent value, with the result today that Australian internet users are increasingly expecting unlimited broadband access,” the company said today in statements released alongside its financial results for the year ended 31 July.

The news comes as a number of Australian ISPs — including TPG itself — have recently launched plans with a terabyte or higher of monthly downloads included, sparking a flurry of revamped broadband plans. TPG also, however, offers an “Unlimited” ADSL2+ plan for $75 a month that does not shape customers’ speeds when they reach a certain download limit.

Financial results
From a financial perspective, TPG’s revenue grew 6 percent in the year to hit $508.2 million, with earnings before interest, taxation, depreciation and amortisation rising 42 percent to reach $171.1 million. TPG said its results meant it had exceeded its financial guidance for the year.

In addition, since PIPE was acquired, the company’s domestic business had “also continued to grow very strongly in its own right”, TPG said.