This review is by reader Clytie Siddall (you can find her blog here). It was first posted on Oz-E-Books.com and is re-published here with her permission. 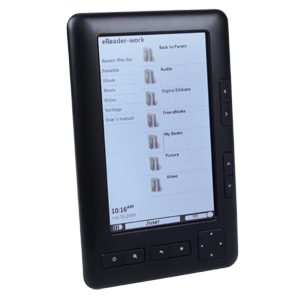 review A new Australian eBook reader has suddenly appeared. The Laser EB101 E-Book Reader was released yesterday. The only reason we know this, is that my husband saw it in the Dick Smith shop attached to his workplace, and brought it home for me to examine (History does not give enough credit to gadget-spotters ;) ).

As a keen follower of eBook news, I was a bit staggered to encounter this completely new eReader. Why hadn’t I seen something about it online? I consulted Darryl, our Oz-E-books maven, and he hadn’t heard about it either. We did find a product page for it, but the details are sketchy.

At $149, this e-reader is competing with the wireless Kindle for customer interest.

What is it like?
It’s not bad. The TFT colour screen is crisp and beautiful. You can charge the device and transfer files directly over USB. It works seamlessly with Calibre. You can read ebooks, view images, listen to music and watch video.

So it all depends on what you want. If you want an e-Ink screen, wireless transfer and access to an eBook shop, then the Kindle does that. If you want a colour screen and multimedia, the Laser reader provides them. This device is attractively packaged, light to hold and fairly easy to use. It has an expansion slot (micro-SD up to 16GB), a headphone jack and a mini-USB port. All in all, the Laser e-reader looks like a good low-budget option.

What about … ?
Using the Laser reveals both its strengths and weaknesses. It appears to be running a Linux system, less than a month old. Someone in the Linux community will immediately work out how to flash the device and use it as a portable computer, allowing the user more access and more flexibility. Linux, a completely open operating system, is A Good Thing™.

However, the interface is not intuitive. The home screen has a main menu on the left-hand side and a sub-menu on the right-hand side. It’s not an obvious layout. When this is used on webpages, the active elements are outlined in colour, so the inactive elements fade into the background.

The narrow vertical cursor isn’t a good indicator: highlighting the current item would be more effective visually. Marking the Enter button “M” (Menu?) is just confusing. A tick-mark would have worked better. There are “Close” buttons on the dialogue windows, but it’s not a touch screen! You do get used to this awkwardness, to some extent, but you shouldn’t have to. A good, intuitive interface “just works”.

In a media file, the “M” button will bring up submenus. For example, in an eBook, you can Go To Page, Bookmark or Favourite. Again, it’s not easy to use, but it does provide basic features.

Button-position is interesting. I’ve seen a number of reviews saying the page-on button should be at the bottom on the right-hand side, and the Laser has it there (I hold my reading device in my left hand, so I prefer something I can activate with my left thumb). This main button is a multi-function rocker switch. It takes you in and out of menus, moves you from one item/button to another, and plays/pauses music tracks. Unfortunately, this switch is too sensitive, so you end up going back one level instead of into a file. Setting the time-zone and date/time was a frustrating example of this: Somehow the switch would send the cursor back or up, or increase/decrease the numbers, when I was telling it to move on.

The Portrait/Landscape button is positioned above the Music button, so I pressed Music by mistake several times. The Music button should be above Portrait/Landscape, just below the music volume buttons. The headphone jack seems to be a bit shallow for a standard headphone plug, and it would be better positioned on the top or side of the device. Although there is a DC port, no power cord or adapter is supplied, so you can only charge the device via USB.

Accessing your Media
Direct USB access is definitely a plus. I’ve seen many users asking for this, where they’re locked into a specific reader. Using a standard mini-USB-to-USB cable, the Laser appears on your desktop (we tested OSX and Linux) as just another disk. You can drag things in and out of it, and delete files on it. The indispensable free eBook toolbox Calibre works seamlessly with the Laser.

Unfortunately, again the interface lets the Laser down. It requires a manual confirmation each time you connect the USB cable or eject the device. This is an unnecessary obstruction to plug-n-play. There’s also an odd “zombie” file behaviour, where a deleted file will still show up for a while on the device.

The Laser handles a wide range of media formats: a definite advantage when compared to a locked-in device like the Kindle. However, it doesn’t handle them well.

Firstly, it loads slowly: even a page turn makes you wait, small files load slowly, and larger files don’t load at all. This is a big disappointment, and may mean the Laser doesn’t have a processor good enough to match its beautiful screen. While testing this device, we had to reset it several times after it crashed on loading a music file.

Loading media files was generally disappointing. Not only did they load slowly (or not at all), but the Laser gives you only a basic reading or listening experience. The exception was video, which (when it loaded) was visually impressive. Unfortunately, the sound was unreliable: Sometimes the audio would play, and sometimes it wouldn’t. The sound also disappeared unpredictably from music tracks.

eBooks and documents
The Laser will display a wide range of ebook and document formats. It also appears to have good Unicode support, since it displayed Vietnamese correctly, despite only being localized into a handful of European languages.

Although these features are described in the manual, you can’t change the font, the font style, the font size or the margins. Regardless of the format, all you get is plain text in one set font. There are no styles or tables. Double-spacing is removed, so the paragraphs are squashed together.

Within these limitations, the Laser provides a reasonable basic reading experience. There’s a page-number indicator down the bottom, and you change pages by pressing Up/Down (there is no scrolling). Cover images are displayed.

I tested the Laser with ePub, PDB (no DRM), HTML, DOC and RTF. All these were basically readable, but lacked images, styling or links. The input engine appears to strip the plain text out of your formatted book, and simply ignore any other information. It doesn’t support frames, links or CSS. Although the manual talks about buying books from Amazon, the Laser does not support Kindle book formats. (It does contain instructions on how to set your Laser up as a reader for Adobe Digital Editions, supporting Adobe DRM, but I didn’t try that, since Digital Editions has never worked properly on any of my computers. Yes, I’m looking at you, Adobe.)

PDFs do not display well on the Laser. In portrait orientation, the text was too small for me. Evidently the Laser does not reflow PDFs. This has been a problem on early versions of other devices (e.g. the Kobo reader), and requires fixing if customers are going to use the device with documents. In Landscape view, PDF pages are chopped into three sections. This makes the PDF basically readable, but is awkward, especially with multiple columns.

Images
Since a PDF is basically an image (a picture of what the creator was viewing at the time), these same problems exist with images on the Laser. If the image doesn’t fit the screen, you can’t scroll in any direction. You can zoom in, but you can’t zoom out.

Again, the Laser’s hardware and software is let down its amazing colour screen. We were unable to load any images over 600kb. Even these smaller images loaded very slowly, although they looked terrific when they finally displayed. If the Laser supported slideshows, and improved its load capability, it would make an excellent high-quality digital photo frame. This is certainly a feature which many users would appreciate.

Video
Again, the file loads extremely slowly. However, the Laser did eventually load a 8.2MB video, and the visual effect was stunning. My daughter said she would buy one immediately if she could view longer video on it like that, and if the sound were reliable. Fix the resources and sound, guys, and you have a sale!

Music
So, how’s the audio, when you get some? Music tracks sounded good. The volume is fairly sensitive: you can hear everything even at the lowest setting. The Laser played MP4 and M4A, as well as the specified MP3 and WMA formats. It even gave the “surround sound” experience, where you can hear the position of each instrument.

Unfortunately, music tracks are also very slow to load, not providing the instant media experience which users want. There are scratchy sounds in the delay between tracks. You can’t rewind or fast forward. There is also what my daughter described as “an annoying little animation in the corner which serves no purpose, a brief loop with no association to the music, completely useless”. In this iTunes world, if you’re going to produce a device which plays music, you need to provide quality and relevance.

Conclusion
The Laser E-Reader is a very basic multimedia device. It might suit you, if you only view smallish files, and don’t mind some waiting and unreliability. The screen is amazing. If the manufacturers put in a decent processor and upgraded the system, the Laser could be a very competitive multimedia player.

As my daughter said, “There are cheap DVD players, but they’re cheap and nasty. You don’t get visual quality like the Laser screen. If they fixed it so it loaded larger video and played the sound with it, they’d have a killer portable movie player!”

Finally, as an e-reader, the Laser disappointed me. I have visual difficulties, and need to be able to set the background colour and font size/type. So I have to give the Laser 0/10 for accessibility. However, if you don’t need these features, and you’re pinched for cash to buy an ereader, it’s certainly worth comparing the Laser with other devices at the same price-point.