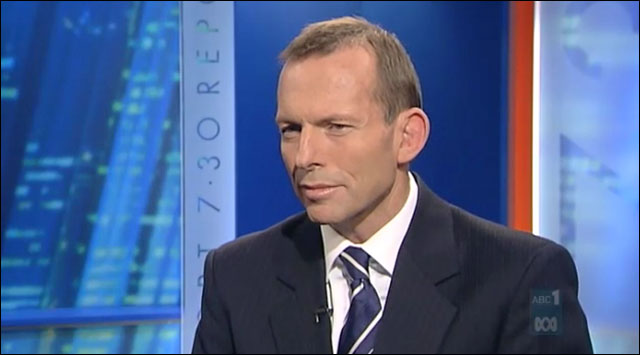 Opposition Leader Tony Abbott last night declared he was “no Bill Gates” in a lengthy interview on the ABC’s 7:30 Report in which he appeared to display a lack of understanding of the Coalition’s new broadband policy unveiled yesterday morning and repeatedly explained he was “no tech-head”.

The full interview is available online through the ABC’s web site or iView streaming TV service.

The policy immediately attracted fire from the telecommunications industry, as well as Communications Minister Stephen Conroy, who described it as “a blast from the past” and Greens Communications Spokesperson Scott Ludlam, who said it ran the risk of resulting in “a real patchwork of service delivery”.

Questioned repeatedly about the details of the policy last night on the 7:30 Report, Abbott would only repeat the Coalition’s top line messages about it.

“We don’t think re-creating a government monopoly is the way to go,” he said, referring to NBN Co. “We want to see competition in these backbones, and then competition to these homes … we are going to have broadband running past the same 97 percent of households, and yes, we’re not guaranteeing 100Mbps – but we are guaranteeing up to 100Mbps.”

“I’m no Bill Gates here, and I don’t claim to be any kind of tech-head in all of this … I do not have the same level of technical competence in this area … if you want to drag me into a technical discussion here, I am not going to be very successful at it.”

“Don’t you have to apply technical competence to budgets and the economy?” he asked. Then referring to guaranteed peak speeds promised by the Coalition’s policy, he said: “Can you really offer that guarantee when you don’t seem to know what peak speed is? It’s quite an easy concept to understand.”

The news comes as Conroy yesterday opened fire on Abbott personally, labelling him a “luddite” for not having appearing to have anything to do with his party’s technology policies, on a day in which the Canberra press gallery also criticised the Opposition Leader on the issue.

In addition, Abbott has seldom commented on the Coalition’s attitude towards Labor’s controversial filter policy, leaving it to Smith, Shadow Treasurer Joe Hockey and Liberal MP Malcolm Turnbull to detail the Coalition’s decision last week to vote against the project.

Image credit: Screenshot of Tony Abbott on the 7:30 Report last night, believed to be OK to use under fair use