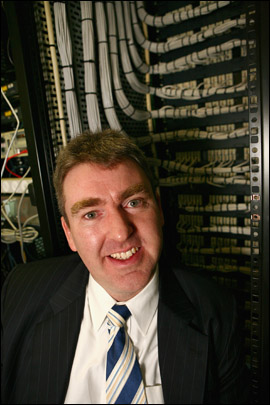 John Lindsay is one of Australia’s best-known telecommunications executives. He’s currently Internode’s general manager of regulatory and corporate affairs, a high-profile role which sees him quoted everywhere. But he’s also worked at iiNet and even Chariot. His secret hobby? He solves problems in Perl for fun :)

I formed a business with two school friends, Marty Gauvin and William Carney. We consulted, designed, coded and even built very cool embedded systems before we realised it was a job. We have all continued to innovate and never stopped marvelling that people are willing to pay us while we do it. One friend went on to found a very well known hosting company and the other is one of the best software developers in Australia.

Building something that is used by more people than I will ever meet, who show their satisfaction by paying a bill every month and who tell their family and friends how much they love it is easy to like about working for Internode. Being able to do all that in Adelaide is what I like most.

While electronics and computers have always been my real hobby a search for hobbies away from work lead to renovating houses and rebuilding cars. I even owned and rode a horse as something completely analogue but I keep coming back to electronics and computers. I subscribe to Silicon Chip magazine and have solved 77 programming problems on ProjectEuler.Net in Perl for fun.

Combining electronics and cars seems to be promising at present as long as I resist the urge to start an electric car company!

Telstra must be structurally separated, a National Broadband Network must be built and the operators of the ten largest IP networks must be required to peer in capital cities. This will create an environment where content and applications can be hosted in Australia and exported to the rest of the world. Walled gardens and pay-walls have failed for mobile operators and newspapers yet these are the barriers the largest networks have created in Australia. It is ten times cheaper to host a high bandwidth content site outside Australia but the cost for consumers to access it and the download speeds are ten times worse!

My parents who let me be a geek before it was cool, my wife who tolerated me working all day and night building ISPs from the ground up before it was commercial and Telstra who provided a great role model of what not to do once it was.

Now it’s my kids, who live in a digital media laboratory, moving gigabytes at hundreds of megabits between platforms that fit in pockets, sit on desks or hang on walls and make it my problem if it doesn’t work. At least they are starting to fix my friends’ computers.