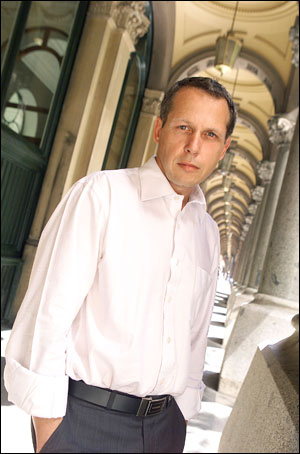 You might know Happen Business managing director Paul Berger as the guy running one of Australia’s accounting and ERP software houses. But did you know that he plays guitar? Or that he used to work at Dick Smith’s when he was young, and still plays soccer with the club he played with as a kid? You do now — he’s this week’s guest for the Friday Five.

My first real job was working at Dick Smith’s. This was back when if you were into electronics and computers, it was the place to be. It was so busy back then we had to get into work at 8:30am on a Saturday because there would be 50 people queued for the 9am store opening. From then on I have been pretty much self-employed, firstly building and then selling two businesses (Applix and P2 computing), until finally working out what I really enjoy (writing and developing software), and founded Happen Business.

I pretty well started at the very beginning, when building your own computer meant physically soldering it together and writing software to run on it. So seeing the constant change and the industry evolve has been really amazing. Being able to combine both my business and technical skills, and really make a difference to people’s business is a huge buzz.

I started playing guitar a couple of years ago and just can’t put it down. It was on my bucket list and so I’m pretty happy that I persisted. I still play soccer every week with the local club I played with as a kid.

We are going through a pretty exciting phase at the moment so it will be very interesting to see. In the ERP/software space I think you’ll see a lot of the older local players drop off. You have to invest an enormous amount of money into R&D to stay relevant in our game, and keep pushing innovation, especially in the eBusiness, B2B and business intelligence areas.

Business process management is starting to get some traction in Australia at the big end of town, so I suspect that will move down to small and medium sized companies which is great for us. As far as platforms go, I can see the iPad and that style of device been a real game changer over the next few years.

Lots of people … On the local front Graeme Anderson, the current chairman of Happen is totally switched on and has been there and done that. David Stewart from Netcomm continues to amaze me. The two Steve’s from Apple. I sort of grew up with them. Jobs is simply a legend. His attention to both detail and big picture is incredible. And how he invents himself again and again, is just inspiring.