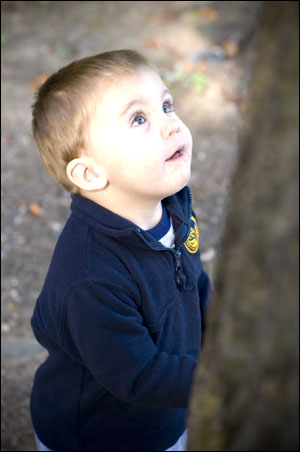 The Mandatory Reporter Guide asks the user a series of questions to help determine the child’s level of harm and whether they are a significant risk case.

In an interview last week, Holling provided background on why Oracle’s Policy Automation software was required. In 2008, a special commission of inquiry into child protection was conducted by Justice James Wood, with all recommendations except for a minority being accepted by the state government. One of those recommendations was to change the system of child risk assessment that professionals who work with children use, from risk in harm to significant risk in harm.

The challenge was the risk in harm threshold was low — in effect everybody who had a concern would call Community Services. The new test was higher and tried to focus Community Services on the more serious high risk cases and redirect the cases that fell below the threshold to newly established child wellbeing units.

The problem is the mandatory reporters — professionals who work with children on a regular basis, did not have any easy means to identify if they had a significant harm risk case on their hands or not. With the old system, there were many situations for a child to be in, with 18 different decision trees. The compulsory 108 page document was too intensive for professionals such as teachers, policeman and other professionals.

The key to develop the process was to base the online guidelines on sound research. The process initially involved four to six months of non-IT work — a process of workshops and hard copy planning before the software was taken into account.

The IT department could not program the system until later in the project, when they could identify the tools that would support the mandatory guideline form.

“One of things Oracle’s Policy Automation system is good at is allowing you take decision trees and rules that are obviously written in English and code them up using very much a natural language approach,” said Holling. “So it was quite a short process to translate the final set of rules that were written on paper into business rules that were actually embedded in the system.”

The CIO noted that one of the reasons it chose Oracle software for the project was that the software giant is a strategic partner of the NSW Government, with the state already using Siebel for client management.

“Another reason why we chose Oracles Automation tool is because with future versions of Siebel it comes very tightly integrated with that. It allows us to then to basically take the results of the Policy Automation survey and actually populate our client management system database with that information,” said Holling.

When Holling was asked what lessons he would pass on to people implementing a similar system, the CIO suggested they should implement a solution with flexibility — a system that allowed the final rules to be changed, especially when there is a short roll-out time.

“One of the key lessons that we learnt through the process is that even if you have 108 pages of rules (in our case) it still doesn’t necessarily tell you everything,” said Holling.

“Certainly once you get into a process whereby you are automating those rules, you soon uncover the areas where you might actually have some outstanding questions that still need to be answered. You still need a little bit more time even after the final set of rules to go back and get those unknown things resolved.”

The Policy Automation System was not the only project the department has had in the pipeline.

The other system, which Holling referred to as “joined-up service delivery”, was required to give the child wellbeing units around NSW a “common view of the children and clients that we were dealing with”. This would help minimise the risk of children coming in contact with different government agencies, where Community Services wouldn’t know what was happening in relation to each encounter.

The Siebel platform already in place with Community Services was used as the platform that each of the six government agencies could utlise. A single platform for multiple agencies hasn’t been implemented in NSW Government before.