You have to hand it to whoever was running Microsoft Australia’s official Twitter account today during the launch of Redmond’s latest and greatest Office 2010 suite.

Whoever “Mick” is, he’s doing a good job, keeping up the maintenance of the company’s official #office2010au hashtag, and replying to all the press, customers and analysts tweeting about the launch.

Just a fine fellow, spreading the good will around. 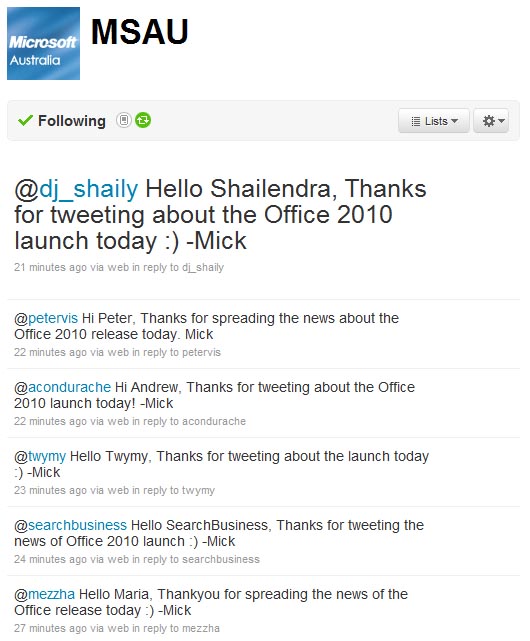 The only problem is, we have a feeling “Mick” doesn’t quite know who’s who in the Microsoft universe. Take this reply he wrote to @gwhiteoz:

But, as any good journalist knows, it’s not enough just to go through a company’s PR agency. If you want to take the message to the people you have to go internal. So “Mick” went right to the top, to Microsoft Australia’s head of Corporate Communications Joanna Stevens Kramer.

We think the correct response from Jo should be:

“@msau hello Mick, what do you think of the launch? Hope you enjoyed it. Thanks, I know where the content is. I #$%^&ing put it there.”