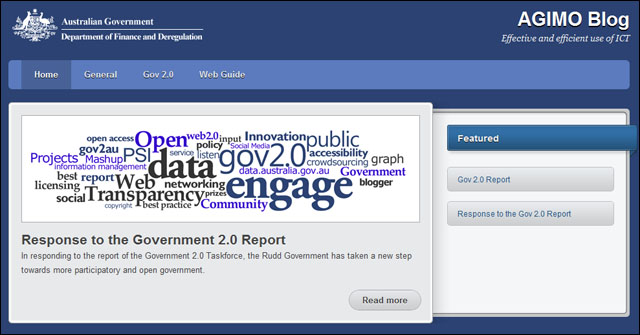 The Australian Government Information Management Office (AGIMO) has created a new public blog in what is so far the most visible result to the Federal Government’s formal response handed down today to its enquiry last year into how it could better use Web 2.0 technologies to enhance transparency and community engagement.

The blog — created under the domain GovSpace.gov.au — features an extensive post by Federal Government chief information officer Ann Steward welcoming the public to to it and outlining some of the Government’s recent initiatives in the technology space — such as the Gershon report and the release of its ICT Workforce Plan last week.

It also features a post by Finance Minister Lindsay Tanner announcing the Government’s response to the Government 2.0 Taskforce released today, a link to a #govt2au Twitter hash tag, and other posts from public servants in the ‘Web Guide Team’ or AGIMO itself.

Comments on the site appear to be moderated for first-time users.

In general, in its response the Government accepted the recommendations of the Government 2.0 Taskforce on how it could better use the new online technologies.

In particular, the response noted that the Government would make a declaration of open government to be presented to Parliament to enshrine the taskforce’s recommendations.

The Government pledged to a Government 2.0 program of work to be led by a steering group, with the aim of engaging agencies and departments across the public sector.

Concrete initiatives will include the inclusion of an Open Government progress report into the Australian Public Service Commission’s annual State of the Service report, establishing an online forum where agencies can record their initiatives and lessons learned (building on the existing GovDex.gov.au site and creating awards for Government 2.0 initiatives.

One significant move will see Australia’s copyright policy amended so that works covered by Crown copyright were automatically licensed under “an appropriate open attribution licence” when they become available for public acces.

In addition, the Department of Finance and Administration will develop a data.gov.au website to facilitate access to information, with agencies being required to ensure that public sector information which is released was also made available through the portal.

There were several Taskforce recommendations the Government only agreed to “in principle” or “with modification” — and even one it didn’t agree with — the proposal that functions currently performed by the Commonwealth Copyright Administration be transferred elsewhere.

In a joint statement with Tanner, Special Minister of State Joe Ludwig described the initiative as a “a significant cultural change for the Australian Public Service” and said a number of issues were already being progressed.

“For instance, the [Freedom of Information] reforms will require more government information to be released and published under the new Information Publication Scheme,” he said.

In a separate statement on her blog, Senator Kate Lundy — one of the driving forces behind the reforms — said the Government’s response to the Taskforce’s recommendations was “excellent” and the commitment to making more information available was “very exciting”.

“To support this initiative, I will be working in conjunction with Minister Tanner and AGIMO to collate and show off Australian Gov 2.0 case studies, so please start thinking about you can present your own Gov 2.0 projects with video,” she said.