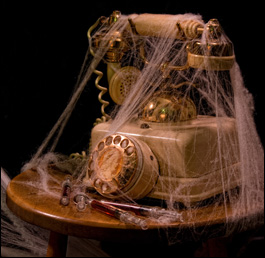 ‘Oh dear’ is a new section on Delimiter devoted to, shall we say, the lighter side of some of the more infamous occurrences in Australia’s technology sector.

If there’s one thing that Delimiter finds amusing, it’s when history repeats itself. As it so often does in Australia’s fickle telecommunications industry.

Take this one example. Who could forget the kerfuffle Telstra caused when it instigated a $2.20 fee for paying phone bills in person or by mail?

“From 1 May 2010, the fee for bill payments made via Australia Post will increase from $0.55 to $1.30. To avoid this fee, use an electronic payment option, such as Direct Debit or BPAY® to pay from a cheque or savings account,” the telco’s web site states.

News of Optus’ faulty memory came via the Drive program on Sydney’s 2UE radio station today, where presenters Murray Wilton and Murray Olds had a rather concerning conversation with ACANN chief Allan Asher. Wilton apparently said he thinks Optus may have just “jacked up their fee for themselves”.

Oh dear. We think $1.30 is probably the “wrong number” for many people.