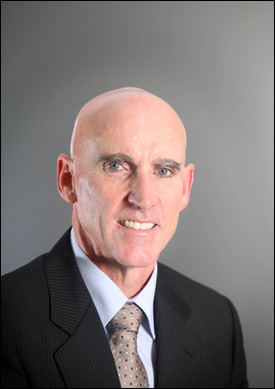 And on both occasions, I almost fell asleep in places.

The first speech — by NBN Co head of industry engagement Christy Boyce — was held in the Sydney offices of law firm Baker & McKenzie yesterday afternoon. On glamorous floor 27 of Sydney’s AMP Centre, a cohort of Australian telco executives gathered over micro-muffins and coffee at 3pm to get the latest on Australia’s $43 billion fibre future.

Everything about Boyce’s presentation screamed that it was trying not to be controversial.

The muted colours and simplicity of her PowerPoint slides — NBN Co standard issue — are surely similar to the design aesthetic to be found in major accountancy firms. Peppered with network topology diagrams, it would be hard to guess from their content that Australia’s telecommunications industry has historically been rife with enraged slanging matches that it is the NBN Co’s ultimate destiny to help mediate.

Boyce’s speech was crisp and punchy and filled with exacting reasoning on the technical decisions NBN Co has made with relation to its wholesale-only network after extensive industry consultation. Any objections were met with the bland reply that NBN Co would love to meet with the injured party and hear their concerns.

Or better yet, take your issues to the working groups being held on every NBN topic concievable by industry association the Communications Alliance.

If an audience member tried to deviate into matters political, Boyce politely brought them back down to earth, reminding them that the NBN Co was not able to make certain decisions; it could only work within the framework the Government had given it. But by and large most seemed content with Boyce’s technically adept, ‘it just makes common sense to do it this way’ approach.

“Mike likes to say that we’re the plumbers,” she said, referring to NBN Co chief executive Mike Quigley (pictured). “We’re not the glamorous end of the industry. We’re not providing glamorous services. We’re simply moving bits from a service provider to a point of interconnect and letting the retail service providers do the rest.”

It was an admirable performance from a graduate of one of the world’s premiere consulting firms — McKinsey and Co — and one repeated by the aforementioned Quigley today. To a somewhat larger audience, the NBN Co supremo delivered the exact same message — with less detail, owing to time constraints — as Boyce.

Even much of the language the pair used was shared, making it obvious a common approach had been discussed.

When Quigley took questions from the audience following his talk, he found himself peppered with embarassing queries from embedded journalists (yours truly included) on matters sensational, including negotiations with Telstra, the status of the implementation study being put together by McKinsey and KPMG, and even how quickly his company could be dismantled in the event of a Coalition victory at the next Federal Election.

His response to all this was suitably muted.

Like Boyce, he maintained a keen awareness of which issues he could comment on, and which were likely to get him in hot water. “I can’t comment on any Telstra negotiations, except to say it’s complex,” he said. “It’s not my call about whether we end up seeing an implementation report.”

“I’m just a government business enterprise, which means I tend to stay out of politics as much as I can … really, it’s up to the shadow minister to comment whenever he feels like commenting … with regards to the upcoming Federal Election, we take it one day at a time. We’re fairly busy.”

Yet Quigley was remarkably erudite on matters of network design when questioned by the telco community. A big debate within the NBN Co in recent months has been which network layer the telco should operate its wholesale services at. It’s settled on layer 2, but there are still some parties who say either layer 1 or layer 3 — or even layer 0 — would be more appropriate.

It would be a mistake to misinterpret the pair’s polished performance over the past couple of days — and there is no doubt it has been going on for some time and will continue to go on — as a coincidence.

Rather, Quigley is flawlessly executing on a strategy of keeping the NBN Co as far underneath the public and political radar as possible, positioning the company as a pure engineering play in the same manner as the Snowy Mountains Hydro-Electric Scheme. As iiNet chief Michael Malone said in an interview last week after attending an NBN Co event, “Even their lawyers act like engineers.”

By portraying a good-natured, mild-mannered embarassment when asked about political questions, Quigley and Boyce can give off the image that the behemoth company they are creating (both commented that NBN Co is hiring staff at an extremely rapid pace) is not involved in the sort of gargantuan re-shaping of Australia’s telecommunications landscape that it is at the centre of.

There is some truth to this. But it is also a rather subtle form of “spin”.

In actual fact, the NBN Co is involved in the political decisions being made about Australian telecommunications at a level far above the engineering layer. Quigley’s hand particularly has been obvious in the rapid — and largely unreported — changed structure in the Tasmanian branch of the fibre company and in the completely confidential discussions with Telstra, which necessarily have a bearing on the regulatory reform legislation Communications Minister Stephen Conroy will soon land in parliament.

There is no doubt in my mind that Quigley and Conroy’s offices collaborate closely when it comes to any major decision about the NBN, or even any significant public comment about it.

Watching Quigley answer questions from Liberal Senators in the Senate Estimates Committee on the several occasions on which he has appeared in that venue is an enlightening experience about his political skill.

For my money, it’s even possible that the revelation this week that the NBN Co’s government relations and external affairs chief had been hired after a referral from Conroy was likely to have been planned in advance. Does anyone seriously believe that both Quigley and Conroy weren’t aware that that the details of Mike Kaiser’s appointment wouldn’t come out eventually, probably in the worst way through the press?

Better to get it out in the open on your own terms and have it quickly die. After all, it would have been easy to anticipate Opposition questions on the matter.

“Sometimes some of us have to turn up in Senate Estimates,” Quigley joked this morning. “It’s impossible to stay under the radar, so frankly we’ve given up on that.”

Now, ultimately there’s nothing wrong with the game Quigley’s playing. He’s a public servant working for the benefit of the nation to build a resource that is almost universally desired, and the NBN Co couldn’t be more open to working cooperatively with the historically fractured telecommunications industry.

Frankly, I for one am glad Quigley is as competent as he is. It bodes well for the future of the $43 billion NBN project.

But let’s not pretend the NBN Co is not tuning its own message for public consumption, or that its deliberately boring exterior shell represents reality.