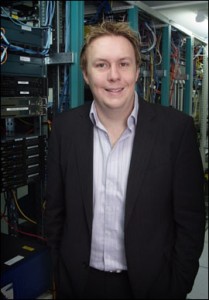 Adam Internet managing director Scott Hicks is a well-known figure in Australia’s telecommunications industry. After all, he’s the long-time managing director of the company his father founded as the Adelaide Amiga club back in 1986, now a large player in the South Australian internet market. But you may not know that Hicks has been boxing since he was 12. Sounds like he likes a bit of a fight — rival ISPs should watch out.

Although I was initially planning to go to university to study architecture, I instead decided to join the family business, Adam Internet. I’ve held a number of roles in the business, including as a help desk operator, sales, front desk services, as well as offering support services to customers.

Over time, I’ve worked my way up to the position of managing director and I’ve seen the business evolve from a family owned business to a strong corporate organisation.

2. What do you most like about working in the telecommunications industry?

The telecommunications industry is constantly changing and growing. It’s thriving with innovation and the market is constantly breaking new concepts. I enjoy the industry for its ability to generate new ideas, challenge the norm and, of course, I enjoy being around like-minded people.

Most of my hobbies tend to be sporting-related, and my favourite is boxing which I started at age 12. Otherwise, I love the great outdoors and regularly spend time on the Murray River wakeboarding and waterskiing. I also love spending as much time as I can with my wife and our one-year-old daughter.

4. Where do you think the Australian telecommunications industry will be in five years?

I believe the industry will be in a similar space — while there will be innovation, I think we will still be facing many of the same issues present in the industry today.

I think we will see more wireless solutions to overcome the inadequacies of the old Telstra copper system. WiMAX and associated products will have an increased presence and will gain a greater share in the market. A trend toward consolidation — or all-in-one products and services — will continue. Products such as the iPad, or other portable devices rivalling laptops and PCs, will increasingly influence the market and impact consumption habits and the way technology is used.

Unfortunately, I think we may still see plans for the National Broadband Network being bandied about — especially between Telstra and the Australian Government.

My father and Chairman of Adam Internet, Greg Hicks, is a great source of inspiration. He has a wealth of experience and is a jack-of-all-trades. He has held a number of different jobs — from being a bus driver to working in real estate — as well as held numerous roles in the ICT industry. He has built Adam Internet from its early days as a bulletin board service into a strong, thriving ISP.