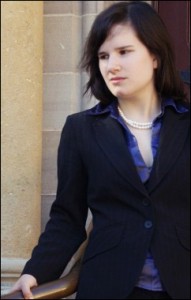 It was late November when the gamer candidate looking to take on South Australian Attorney-General Michael Atkinson in his own electorate got involved with the newly formed Gamers4Croydon political party.

Kat Nicholson (pictured) said she had emailed party founder David Doe to let him know she could help the party out with marketing, research and so on; tasks where her background in journalism and multimedia production would come in handy.

But things didn’t go entirely according to plan after Nicholson turned up to one of Gamers4Croydon’s party council meetings. “There were another five members [of the council],” she recalls. “They turned to me and said, ‘Kat, we’ve decided we want you to be a candidate.'”

Since then Nicholson’s life has been a busy one. The 21-year-old avid gamer — she prefers first person shooters on PlayStation, her favourites being the Medal of Honour and Call of Duty series — has been extremely busy. Answering email, conducting interviews with the media. Door-knocking to take her party’s message to the streets of Croydon.

Atkinson easily took Croydon in the last state election in 2006; his winning proportion was 67.1 percent of the vote, a sum increased by 6.8 percent over the previous election. The Liberal candidate, Briony Whitehouse, didn’t even come close, winning just 19.3 percent. When preferences deals were finalised Atkinson had won even more conclusively, with 76 percent square.

A fitting margin for a sitting politician who has held Croydon since 2002 when it was created from the ashes of the former electorate Spence — which Atkinson had held since 1989.

And yet, some of the shine has come off the politician in recent times. And it always seems to be the same issue — censorship.

It’s ironic that Atkinson shares some a journalistic background with Nicholson, who is studying a masters in journalism at the University of South Australia. The Attorney-General spent a few years as a journalist and sub-editor at Adelaide’s mainstay newspaper, The Advertiser.

Censorship is the main issue that Nicholson and Gamers4Croydon are concerned about — primarily, Atkinson’s opposition to bringing computer games in Australia in line with other media by creating a R18+ rating.

However, Atkinson’s recent support for new legislation banning anonymous online comments about the upcoming election during the campaign has just added fuel to the fire.

The News Ltd-owned Advertiser and AdelaideNow website are currently in an all-out war with Atkinson over the issue.

And Nicholson says her message is resonating with the electorate. “There’s been a lot of sentiment against Atkinson so far,” she said today in an interview. “Parents want a better rating system. I haven’t had any opposition, really.”

Nicholson said it wasn’t just the hardcore gamer types in the electorate interested in the issue. It was also a lot of more mainstream people who just play games casually. She argues you don’t have to be a gamer to know the descriptions of violent video games make them sound worse than they are.

So far the candidate has been door-knocking in the electorate, dropping leaflets, making her case on the internet and getting in contact with local community groups. “We’ll probably have some form of community meeting,” she says, where people can air their concerns.

Already the effort has attracted Atkinson’s attention. He confirmed Nicholson’s age (she’s 21) and address via email.

And in late January the Attorney-General went on the attack, telling Gamespot Australia he assumed the Gamers4Croydon campaign would involve “criminal activities and dirty tricks”, which he said was what he had come to expect from gamers, and that the party would struggle to get even one percent of votes. Atkinson also said he had started campaigning early.

Nicholson says her campaign “won’t be anything criminal” and described Atkinson’s comments as “quite offensive, really”.

“We’re quite boring. We’re not a bunch of petty terrorists,” she says.

The outcome
Although Croydon is a very safe Labor seat, preference deals and a strong backlash against Atkinson could still make the Attorney-General nervous, come election day. Nicholson couldn’t comment yet on any preference deals the party has struck.

However, she is much less taciturn about the long-term outcome of the battle. If Gamers4Croydon doesn’t have the votes to take down Atkinson, Nicholson sees it only as the first skirmish. She points out the party has a chance at taking a seat in the state’s Legislative Council through the candidacy of its president Chris Prior.

If that doesn’t happen, there is always the possibility of other elections, with the party planning to continue the campaign on the R18+ classification issue until “something is done”. And if there was a significant protest vote aimed at Atkinson, the politician might not voluntarily change his mind on the issue, but Premier Mike Rann might “make him”.

With the formation of other digital rights parties like the Pirate Party of Australia, Nicholson says Generation Y has come of age and has started talking about issues that “have been pretty much ignored”. She says it’s “about time” the generation made itself felt as a significant force. An R18+ rating is an “inevitability”, she says. “It might not happen tomorrow, but it will happen.”

And in the case that someone knocks Atkinson off his Croydon seat, but the Labor Party wins the election and maintains the same policy, with a different Attorney-General?

“No other Attorney-General is going to make the same mistake,” says Nicholson. “I think the Labor Party would be smart enough to know.”